Current Middle East events are definitely stage setting for the final fulfillment of the Israeli War prophecies of Psalm 83 and Ezekiel 38-39. Turkey’s recent newsworthy gyrations against Israel has got the “EZEKIEL 38 NOW” advocates rightfully at the edge of their seats. Now, Turkey and Iran, both members of the Ezekiel 38-39 prophecy, share a common enmity toward Israel.

Certainly, there is just cause to consider the Ezekiel 38 – 39 prophecy in light of recent events, however, what about Hezbollah, Syria, Hamas, and the Palestinians? They also are at odds with Israel and likewise frequently dominate current Mideast headlines. Curiously, Ezekiel 38 describes nine distinct populations by their ancient names including Russia, Iran, Turkey, and Libya but omits the historic name equivalents of Hezbollah, Syria, Hamas, and the Palestinians 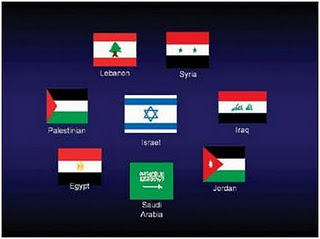 In light of the fact that these omitted populations are presently among Israel’s most observable enemies, some “EZEKIEL 38 NOW” advocates have attempted to identify them in Ezekiel 38:6 among the “many peoples with thee” of the Ezekiel 38 Magog confederacy. However, there are three potential problems with this line of teaching.

1. Hezbollah, Syria, Hamas and the Palestinians along with Egyptians, Saudis, and Jordanians are identified in a distinctly different Israeli War prophecy described in Psalm 83. The Psalm lists ten entirely separate members not included among the Ezekiel 38:1-6 invaders. Thus it is probable they are not the “many peoples with thee” in Ezekiel 38:6, but are “many peoples distinct from thee”, not listed in Ezekiel 38 among the invaders.

2. The hordes of Ezekiel 38 invaders must cross over much of the land possessed by these Psalm 83 nations and / or territories presently occupied by the terrorist populations in order to invade the nation of Israel. This beckons the question; Why aren’t these nations, terrorists, or refugees listed among the Ezekiel 38 invaders?

3. Most importantly, Ezekiel 38 identifies nine specific invading populations but oddly doesn’t mention any of the Psalm 83 Arab confederates among them. This conspicuous omission makes no sense when you consider that Ezekiel references all of the Psalm 83 members numerous times elsewhere throughout his prophetic book.

Case in point, Ezekiel lists Tyre 12 times. Tyre is a member of Psalm 83 and likely represents the Hezbollah today. He alludes to Philistia and / or Philistines 4 times. They are probably the Hamas. Edom or the Edomites are referenced 7 times. Asaph, the author of Psalm 83, calls them the tents of Edom and I interpret that as today’s Palestinian refugees. 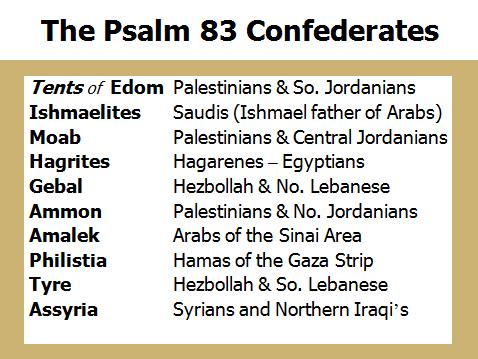 The other Psalm 83 members like, Moab or Moabites, Ammon or Ammonites, Amalakites, Egyptians, Assyrians, Gebal (Lebanon), and the Saudis under the ancient banners of Dedan or the Ishmaelites, are also referenced elsewhere in the book of Ezekiel. In fact, all together the above Psalm 83 confederates are mentioned 89 times by Ezekiel.

Not one of those 89 references shows up in Ezekiel 38-39, with the exception of a potential Saudi contingent represented by Dedan in Ezekiel 38:13. But in this instance, Dedan appears to abstain from enjoining with the Ezekiel invaders. This suggests they want no further part in an invasion of Israel. Ezekiel 25:13 declares many in Dedan will be killed in a war, which appears to be the result of the Psalm 83 war. If so, this could be the reason they apparently opt out of the Ezekiel invasion.

I believe the glaring omission of the Psalm 83 Arab confederates from the Ezekiel 38 list of invaders suggests they are not part of the Ezekiel 38-39 invasion. It is highly possible that they are defeated either prior to, or in the aftermath of, the Ezekiel 38 – 39 Israeli War prophecy. Listed below are a few of the reason I believe Psalm 83 precedes Ezekiel 38.

Ezekiel 38:8-13 mandates that Israel must be dwelling securely, without walls, bars, or gates, and in the center of the land, probably alluding to the Genesis 15:18 landmass. Additionally, the Jewish State must be in receipt of great spoil. In my estimation, Israel today is not fulfilling these conditions.

Israel is unable to dwell securely as a result of their surrounding Psalm 83 hostile Arab neighbors. Walls, bars, and gates exist in Israel today in order to protect them from being terrorized by certain members of the Psalm 83 confederates, like Hamas, Hezbollah, and the Palestinians in general. Additionally, the goal of the Ezekiel 38 invaders is to destroy Israel and take plunder and great spoil. Israel doesn’t’ presently appear to possess the great spoil that Russia and their coalition will someday covet.

However, in the aftermath of an Israeli Conquest over the Psalm 83 confederates, all of the above requirements could easily be met. A safe dwelling Israel could temporarily emerge. Arab spoils of war could be had, additional territory annexed, and walls, bars, and gates could be swiftly brought down.

Another important distinction between the prophecies of Ezekiel 38 and Psalm 83 is found in their differing motives. Psalm 83:12 declares that the Arab confederates want to destroy Israel to take over the Promised Land. Ezekiel 38:12-13 states the Ezekiel invaders seek to destroy the Jewish State and confiscate plunder and great spoil.

Another important difference between Psalm 83 and Ezekiel 38 may be understood by identifying the purpose of the “exceedingly great army” of Ezekiel 37:10. The Ezekiel 38 invaders are destroyed divinely, but the Psalm 83 Arab confederates appear to be defeated by the Israeli Defense Forces according to Ezekiel 25:14, and Obadiah 1:18.

Interestingly, an exceedingly great army of Israel is mentioned in Ezekiel 37:10. This reference seemingly segues into the Ezekiel 38 – 39 prophecy. Logically, a reader might assume this army plays an instrumental role in the war of Ezekiel 38. However, Ezekiel 38:18- 39:6 teaches that this army plays little to no part in Ezekiel’s invasion.

Upon closer investigation, this army appears to be the tool empowered by God to defeat the Psalm 83 Arab confederacy. If so, the fact that the army of Ezekiel 37:10 is referenced prior to the Ezekiel 38-39 war passages infers that chronologically Psalm 83 precedes Ezekiel 38.

Some of today’s expositors teach that Ezekiel 37:10 alludes to a “multitude” rather than an army. However, there are some important interpretive details to consider when deciphering Ezekiel 37:10. The Hebrew word Ezekiel uses in verse 10 for army is, “chayil” and it is used 12 times elsewhere by Ezekiel and over 225 times throughout the Old Testament.

All of Ezekiel’s usages and many Old Testament renderings clearly depict it as either an army or riches acquired via the spoils obtained in the aftermath of a war. Nowhere else in the book of Ezekiel can it possibly be translated as a multitude. This establishes precedent that an army rather than a multitude is being described by Ezekiel.

In conclusion, the fulfillment of a Bible prophecy mandates that the episode meets the prophetic description of the event entirely and exactly. There can be no overlooking even the slightest detail given. The growing tendency among eschatologists to recognize that current Mideast events are stage setting for the coming Psalm 83 and Ezekiel 38 wars is to be commended. However, newspaper exegesis can often cause us to overlook significant prophetic details and should be avoided.

Perhaps Ezekiel 38 will come soon and precede Psalm 83, but from the numerous points made above it is doubtful. There are ten members listed in Psalm 83 not listed in Ezekiel 38. These ten represent Israel’s most observable modern day enemies since becoming a nation in 1948. They should be considered carefully before elevating the Ezekiel 38 – 39 Gog of Magog invasion to an imminent event.