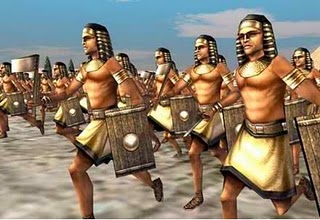 Most modern day equivalents of the Psalm 83:6-8 participants are easily identifiable today. Clearly, the territories of Edom, Moab, and Ammon represents modern day Jordan. Furthermore, Tyre still exists in Lebanon and the Gaza Strip is located in ancient Philistia. However, Egypt is more difficult to identify causing some scholars to question its existence in the Psalm.

Among them is the respected broadcast journalist David Dolan. He authored a book in 2001 entitled “Israel in Crisis, What Lies Ahead.” Dolan’s book along with Dr. Arnold Fruchtenbaum’s, Footsteps of the Messiah, were among the first books published that addressed Psalm 83 as a future war between Israel and its bordering Arab enemies. Dolan excluded, but Fructhenbaum included, Egypt in the Psalm 83 confederacy.(i)

Probably motivated by the February, 2011 crisis in Egypt, David Dolan wrote the following.

“Will Egypt eventually break its peace treaty with Israel? I suspect that in the end, the American-funded and trained army will not allow this to take place. I noted in my latest book, Israel in Crisis, that Egypt is not listed in Psalm 83 as being among a host of regional Arab powers that will attempt to destroy Israel in the prophesied end days, while Jordan, Lebanon and Syria are mentioned, along with the Palestinians.” David Dolan 2/7/11

As much as I respect Dolan’s work, I respectfully disagree with his assessment on Egypt’s non-participation in Psalm 83. Here is what the Psalm says:

O God, keep not thou silence: Hold not thy peace, and be not still, O God. For, lo, thine enemies make a tumult; And they that hate thee have lifted up the head. Thy take crafty counsel against thy people, And consult together against thy hidden ones. They have said, Come, and let us cut them off from being a nation; That the name of Israel may be no more in remembrance. For they have consulted together with one consent; Against thee do they make a covenant: The tents of Edom and the Ishmaelites; Moab, and the Hagarenes; Gebal, and Ammon, and Amalek; Philistia with the inhabitants of Tyre: Assyria also is joined with them; They have helped the children of Lot. Selah (Psalm 83:1-8, ASV; Emphasis Added) 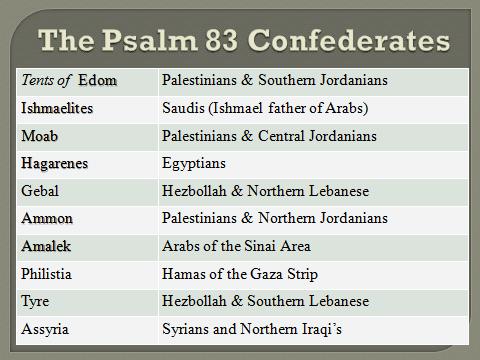 (The image identifies who this author believes are the modern day equivalents of the Psalm 83 confederates.)

The Enemies vs. The Haters

Asaph seems to identify two distinct groups inside the ten member confederacy. He says “thine enemies make a tumult; And they that hate thee have lifted up the head.” The New American Standard Version translates; “Your enemies make an uproar, And those who hate You have exalted themselves.”

Who are the “enemies” and “haters” of God listed inside the Psalm? I cover this extensively in my book Isralestine, The Ancient Blueprints of the Future Middle East in the chapter called “Olam Ebah, The Ancient Arab Hatred of the Jews.”

The Psalmist says the Lord has those who hate Him, but unlike the general carnal hatred characteristic of sinful humanity described in Romans 8:7, it is a deeply rooted hatred dating back almost 4000 years. These haters listed by Asaph include the Egyptian matriarch Hagar alongside the ancient patriarchs; Ishmael, Edom (Esau), Moab, Ammon, and Amalek. These all had familial relations with Abraham and histories of aggression against Abraham, Sarah, Isaac, Jacob, and their Hebrew descendants.

Hagar mothered Abraham’s first son Ishmael. Esau was Abraham’s grandson from Isaac. Moab and Ammon were the children of Abraham’s nephew Lot. Lastly, Amalek was Abraham’s great-great-grandson through the line of Esau.(ii) Esau fathered the Edomites according to Genesis 36:1.

These individuals coveted the rich contents of the Abrahamic Covenant and entered into family feuds with the true Hebrew recipients of the covenantal promises. These individuals, along with their Hebrew counterparts, were the Benjamin Netanyahu’s, King Abdullah’s, and Hosni Mubarak’s of their time. Out from their loins nations were formed.(iii)

These jealous “haters” incubated an enmity against the Lord that manifested throughout the region against the Israeli descendants of Abraham, Isaac, and Jacob. The Bible calls it an “ancient hatred,” also translated as a “perpetual enmity.” Ezekiel 35:1-5 informs us it was spawned by Esau identified with Mount Seir of ancient Edom.

The two Hebrew words used by Ezekiel are Olam Ebah, which when used together can be translated as, “a condition stemming back long ago in ancient times, perpetuated throughout time, manifesting into hostility with no apparent end in sight.”

As time progressed the Hebrews staked their covenantal claims throughout the Middle East.

Suffice it to say the other four members of Psalm 83, Gebal, Philistia, Tyre, and Assyria, found it favorable to their religious, real estate, and cultural needs to resist these Hebrew claims and embrace the ancient hatred well established throughout the region. Thus, these four populations probably represent the “your enemies” group in Psalm 83. 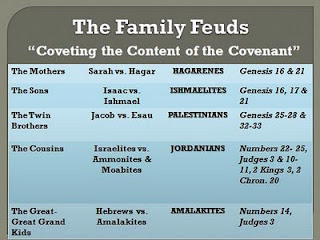 The family feuds that developed can be studied in the chapters depicted in the image.

Hagar’s contemptuous behavior toward Sarah is one of the reasons we can include her among the Psalm 83 haters. Considering Hagar was an Egyptian according to Genesis 16:1 and had her son Ishmael marry an Egyptian bride in Gen. 21:21, we can safely conclude the Hagarenes represent Egypt in Psalm 83 through her and Ishmael’s family tree.

However it’s not quite that simple, some Bible translations list Hagarites or Hagrites, rather than Hagarenes. This has caused many to believe Psalm 83 is describing another ethnicity rather than Egyptians. This is because the Hagrites or Hagarites show up in 1 Chronicles 5:10,19-20 and elsewhere as a tribe dwelling approximately 300 miles northeast of Egypt, east of Gilead.

Additionally, listed below are other reputable quotes supporting the Psalm 83 Hagar – Egyptian connection:

Holman Bible Dictionary
HAGARITE (Hag’ ahr ite) Name of nomadic tribe whom the tribe of Reuben defeated east of the Jordan River (1 Chron 5:10, 19-20). Reuben won because they called on and trusted in God. The tribal name is apparently taken from Hagar, Sarah’s maid and mother of Ishmael (Gen. 16).

International Standard Bible Encyclopedia
Hagarenes / Hagarites / Hagrites
An Arab tribe, or confederation of tribes (1 Ch 5:10, 19, 20 the King James Version “Hagarites”; 1 Ch 27:31 the King James Version “Hagerite”; Ps 83:6 “Hagarenes”), against which the Reubenites fought in the days of Saul. In Gen 25:12-18 are recorded the descendants, “generations,” of Ishmael, “whom Hagar the Egyptian Sarah’s handmaid, bare unto Abraham.”

New Commentary on the Whole Bible: Old Testament
Ps. 83:6-8 tabernacles—i.e., tents. Edom—Esau’s descendants; they were located southeast of the Dead Sea and repeatedly attacked Israel (Psa. 137:7; Obadiah). Ishmaelites—descendants of Hagar and Abraham (Gen. 25:12ff.) as are the “Hagarenes.”

Barnes, Notes on the Old Testament – Ps. 83:6-8
And the Hagarenes—The Hagarenes were properly Arabs, so called from Hagar, the handmaid of Abraham, the mother of Ishmael. Gen. 16:1; 25:12. As connected with the Ishmaelites they would naturally join in this alliance.

Due to the confusion between the Hagarene verses Hagrite translation in Psalm 83, I emailed my friend Dr. Arnold Fructhenbaum of Ariel Ministries in 2008. Dr. Fruchtenbaum, a graduate of Dallas Theological Seminary, ranks among today’s most respected eschatologists. I asked him how certain he was that Psalm 83 identified Egypt through the Hagarenes. His email response to me was emphatic that Egypt is identified through the Hagarenes in Psalm 83.

Lastly, those who omit Egypt from Psalm 83 need to explain Egypt’s apparent future confrontation with Israel in Isaiah 19:16-18. Isaiah 19:16 declares Egypt will someday greatly fear Israel. From Isaiah’s time until now, this fear has only been in place since Israel’s defeat of Egypt in the wars of 1948, 1967, and 1973. It is this fear that drove former Egyptian President Anwar Sadat to make peace with Israel in 1979.

Isaiah 19:17 says this fear evolves into a terror of Israel that overtakes all of Egypt. Isaiah 19:18 predicts this terror results in Egypt allowing Hebrew to be spoken in five Egyptian cities. One of these cities will be renamed, the “City of Destruction.” These three passages encourage the possibility that Egypt’s participation in Psalm 83 provokes the wrath of the Israeli Defense Forces against at least 5 Egyptian cities. In the aftermath of an I.D.F. victory over Egypt, five cities promote Hebrew as the spoken language. This suggests Jews migrate into these five cities taking their language, religion and culture with them.

Why would the Antichrist take over 5 Egyptian cities and allow Hebrew to become the spoken language? It is commonly understood the Antichrist will be attempting Jewish genocide at the time. If this is the case it would be contrary to his overall purposes to allow 5 cities in Egypt to promote the language of Hebrew.

For the above reasons I strongly believe that Egypt is identified in Psalm 83. Therefore, unlike David Dolan, I believe Egypt will someday break its peace treaty with Israel and join the Psalm 83 confederacy.