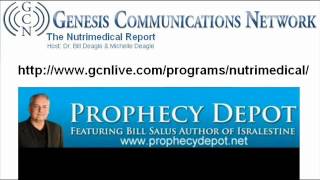 2013 is already setting up to be an impactful year. While Americans grapple at home with serious domestic issues, the possibility that missiles might fly across the Middle Eastern skies looms large. In this radio show, Dr. Bill Deagle interviews Bill Salus about the following prophetic topics.

The Arab – Israeli War described in Psalm 83
Egypt’s 3 prophetic judgments described in Isaiah 19, Ezekiel 29, and Daniel 11
The Destruction of Damascus predicted in Isaiah 17
The coming “Greater Israel”
The Faithful Jewish remnant
Iran’s “Double Jeopardy” in the prophecies of Jeremiah 49:34-39 and Ezekiel 38

To listen to this informative one hour radio program CLICK HERE  and then navigate in the “Nutrimedical Report Archives” to October 2012, then scroll down and click on OCTOBER 31, 2012 (hour 3)