The Burden Against the Muslim Brotherhood in Egypt and Jordan 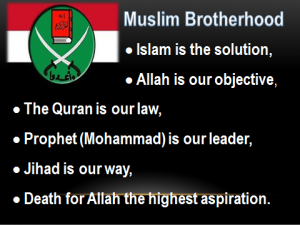 WITH THE backing — or at least the approval — of the United States and other Western powers, the Muslim Brotherhood has ascended to power in Egypt. Why is this important? There is a familiar expression: “As goes Egypt, so goes the Middle East.”

Setting aside the question of why the Obama administration thought removing Hosni Mubarak from power was a good idea (did our government really not understand that the Muslim Brothers were just waiting for an opportunity like this?), prophecy analyst Bill Salus, host of Prophecy Update Radio and author of Isralestine and Revelation Road, discusses recent shifts in Middle Eastern geopolitics, the Muslim Brotherhood’s growing influence in the region, and what may be next according to Bible prophecy.

The image reflects several of the Muslim Brotherhood’s credos.

Please join the discussion at the PID Radio Cafe, visit the VFTB Facebook page and check out the great Christian podcasters at the Revelations Radio Network.