The Biblical Indictment of America (Video) 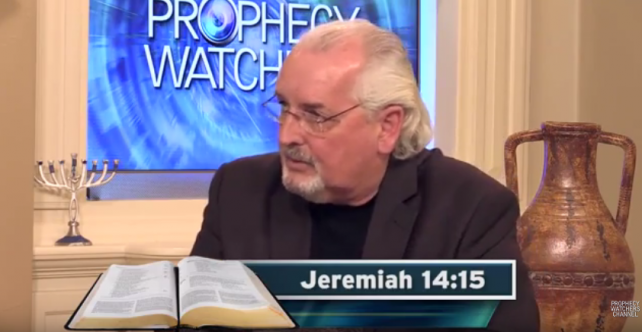 SHOULD AMERICANS STOP PRAYING for the USA, which has now crossed every forbidden biblical boundary? Jeremiah 7:16, 11:14 and 14:11 points out that a wicked nation can reach a point where the Lord will no longer listen to the prayers of its people. Over the past 6 decades America has forsaken God and now the nation has been given over to sexual perversion, homosexuality and moral depravity! (Read Romans 1:24-32)

Prophecy Watchers TV interviews Bill Salus about his BIBLICAL INDICTMENT OF AMERICA. Gary Stearman and Bill Salus expose the true America that is poised to go from judgment to destruction. They compare America of today with Judah of the past when it was destroyed by the Babylonians. At that time, the prophet Jeremiah was warning about Judah’s judgment, but most of the people were rejecting him in favor of the false prophets that tickled their ears. This problem is repeating itself now in many American Churches and on some Christian websites and TV and radio shows!

Bill reads Jeremiah 14:13-16 and asks Americans, “Are you hearing warm and fuzzy little messages from people who have had visions and dreams and know everything is going to hunky-dory in America? Ask yourself, are those messages coming from the Lord? Because you can get false messages. So we need to be careful and be in our Word and understand the nature of our country’s current depraved condition.”

Then I (Jeremiah) said, “Ah, Lord GOD! Behold, the prophets say to them, (in Judah) ‘You shall not see the sword, nor shall you have famine, but I will give you assured peace in this place.’” (v13)

And the LORD said to me, (Jeremiah) “The prophets prophesy lies in My name. I have not sent them, commanded them, nor spoken to them; they prophesy to you a false vision, divination, a worthless thing, and the deceit of their heart. (v14)

Therefore thus says the LORD concerning the prophets who prophesy in My name, whom I did not send, and who say, ‘Sword and famine shall not be in this land’—‘By sword and famine those prophets shall be consumed! And the people (in Judah) to whom they prophesy shall be cast out in the streets of Jerusalem because of the famine and the sword; they will have no one to bury them—them nor their wives, their sons nor their daughters—for I will pour their wickedness on them.’ (v15-16)