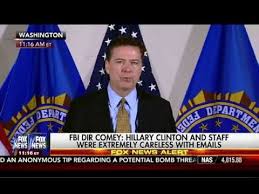 On July 5, 2016, FBI director James Comey recommended that no indictment would be made against Hillary Clinton for her “EXTREMELY CARELESS” handling of her emails.

At the same time that the Comey announcement came, Bill Salus was being interviewed on the nationally syndicated radio show called, Bill Martinez Live. The interview began by talking about the biblical perspective of Brexit. However, the topic quickly shifted to the spiritual significance of the decision to exonerate Hillary Clinton in this email matter.

Click the radio bar image below to hear Bill Salus explain what this decision could mean for the future of America. (The Salus interview is in two segments and picks up around the 8-minute mark).