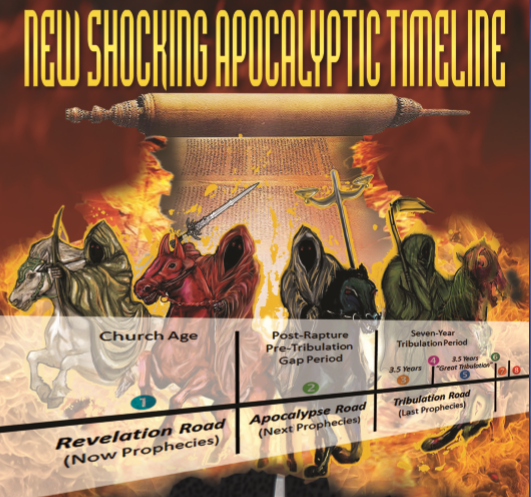 This article was taken from an appendix within the book entitled, APOCALYPSE ROAD, REVELATION FOR THE FINAL GENERATION.

This article provides a newly designed, shocking apocalyptic timeline for the unfulfilled biblical predictions of the last days. It was taken from my book entitled, Apocalypse Road, Revelation for the Final Generation. Most basic prophetic timelines include the Church Age, Tribulation Period, Millennium and Eternal Order like the “Traditional Timeline” image below.

The problem with the traditional timeline is that it fails to consider the time interval that exists between the Church Age and the Tribulation Period (Trib-Period). The Trib-Period does not commence when the Rapture occurs, rather it starts when the Antichrist confirms the covenant between Israel and some other party in Daniel 9:27. Isaiah 28:15 and 18, which also alludes to this covenant, identifies the other party typologically as “Death and Sheol.” Thus, a time-gap can, and likely does, exist between the Church Age and the Trib-Period.

In my Post-Rapture / Pre-Tribulation Thesis, which is included in the Apocalypse Road book, I explore this vastly overlooked time-gap in greater detail. Within the thesis, I conclude that this gap period will probably last for several years and that some powerful Bible prophecies could find fulfillment at that time.
The topics covered in this thesis are listed below. As you will discover from this lengthy list, the Post-Rapture / Pre-Tribulation gap period could be jam packed with world changing events. Some of the topics below start in the gap-period, but find their final fulfillment within the Trib-Period.

1. Introduction to the Post-Rapture / Pre-Tribulation Thesis.
2. What Will the World Look Like Shortly After the Rapture?
3. The Revealing of the Antichrist.
4. The Church is in Heaven Before the Antichrist is Revealed on Earth.
5. The Revealing of the Antichrist is Being Restrained.
6. The Mystery of Lawlessness and the Lawless One.
7. The Antichrist’s Rise to Political Power Takes Time.
8. The Two Parties of the False Covenant.
9. The Post-Rapture / Pre-Tribulation Timing of the Five Seals.
10. First Seal: The White Horseman of the Apocalypse.
11. Second Seal: The Fiery Red Horseman of the Apocalypse.
12. Third Seal: The Black Horseman of the Apocalypse.
13. Fourth Seal: The Pale Horsemen of the Apocalypse.
14. Who are Death and Hades?
15. Is Islam the Fourth Horsemen of the Apocalypse?
16. Is Islam the Harlot World Religion?
17. Who are Death and Hades Killing?
18. Fifth Seal: The Martyrs of the Apocalypse.
19. The Two Killing Crusades that Martyr Christians After the Rapture.
20. How Do the Fifth Seal Saints Get Saved?
21. The Three Periods of Post Rapture Christian Martyrdom.
22. Why is the Catholic Church Cast into the Great Tribulation?
23. How Will God Kill the Children of Thyatira?
24. The Main Obsessions of the Blessed Mother.
25. Satan’s Plan to Influence Mankind Through the Harlot.
26. Salvation Comes Through the Roman Catholic Church.
27. The False Covenant of Death in Agreement with Sheol.
28. What is the True Content of the False Covenant?
29. The Two Deadly Phases of the Overflowing Scourge.
30. Phase One of the Overflowing Scourge – Isaiah 28:15.
31. Phase Two of the Overflowing Scourge – Isaiah 28:18.
32. Summary of the Two Phased Overflowing Scourge.

THE APOCALYPSE ROAD TIMELINE (See below)

The newly designed timeline below is formatted to correspond closely with my books in this end time’s Apocalypse Road trilogy, which are, Revelation Road, Apocalypse Road and Tribulation Road. These three books are identified and bracketed in their appropriate time slots directly beneath the timeline. The image below includes the numbers between #1 through #8 that identify the probable timing of the unfulfilled prophecies listed beneath the timeline. These numbers are sequenced in the three primary periods of the last days, which are;

CAVEAT: In no way, does this timeline appendix attempt to set a date, time or any preconditions for the fulfillment of the Rapture prophecy. I believe that the Rapture is an imminent event that could happen at any time between now and the start of the seven-year Trib-period. It is a sign-less event, which means that the prophecy has no preconditions!

NOW, NEXT and LAST Prophecies

Before displaying the “Apocalypse Road Timeline,” it is important to note that there are three categories of coming biblical prophecies. They are the;

The NOW Prophecies are the unfulfilled ancient biblical predictions that appear to be imminent, which means they could happen NOW! These ancient foretellings have either minor or no remaining preconditions inhibiting them from happening at the present time. These predictions are identified and explained in detail within my book entitled, “The Now Prophecies.”

The LAST Prophecies still have significant preconditions preventing them from finding fulfillment. They will find fulfillment relatively soon, but the LAST’s must wait in line behind the NOW’s and NEXT’s for their turn on the prophetic timeline.

The prophecies below are listed in the chronological order that the I believe they could happen. However, these events might find fulfillment differently than they are sequenced. Moreover, these predictions only represent some of, rather than all of, the prophecies of the end times. Each prediction begins with its time slot between numbers #1 through #8.

The information revealed in Apocalypse Road, Revelation for the Final Generation has the potential to cause some people interested in Bible prophecy to rethink their end time’s models and redraw their last day’s timelines.

If the Post-Rapture / Pre-Tribulation gap period lasts for several years then some of the prophecies that were thought to be part of the Trib-Period, will likely need to be relocated into the gap period. I have rearranged my timeline and I suspect you might also after reading Apocalypse Road.

Click HERE for more information about Apocalypse Road, Revelation for the Final Generation.