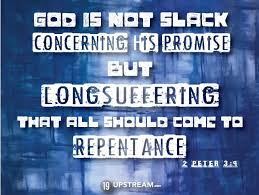 What does it mean to be longsuffering? The word is defined as, “having or showing patience in spite of troubles, especially those caused by other people.”

The root words are LONG and SUFFERING, which is the active verb that means to actively be suffering in the present tense. They are defined below.

LONG: lasting or taking a great amount of time.

SUFFER: experience or be subjected to (something bad or unpleasant). to endure pain, disability, death, etc., patiently or willingly.[i]

Imagine a loving longsuffering God, that endures painful undertakings within His creation over a prolonged period, namely over several millennia.

The list goes on, but the point is that the Lord presently endures enormous pain because He wishes that none would perish, but that all would be blessed with everlasting life through Christ Jesus. (John 3:16).

The Lord, for a long time past and in the present, tempers His fury and righteous indignation with His enduring pain. He turns the other cheek continually in the practice of what He preaches. (Matthew 18:21-22)

Pain tolerance has its limits within humanity. Some can endure suffering longer than others, but eventually, we all succumb to a final dose. But God, has in the past and continues to suffer in the present, beyond what humans can conceivably imagine or definitively measure. His Son, Jesus Christ evidenced this when He obediently went through the scourging’s, crown of thorns, the crucifixion and the burial in the tomb.

The reality that a believer must soon come to grips with is that the Lord is presently in the longsuffering condition but will someday shift His focus to the fury mode. Vengeance is the Lord’s privilege as the Divine Creator and as per Deuteronomy 32:35 and elsewhere.

There are numerous unfulfilled biblical prophecies, like in Jeremiah 49:37 and Ezekiel 25:14-17, that forecast severe judgments are forthcoming upon various nations. These judgments come because the Lord is furious with those specific nations. This means that at some point in the future, the Lord says, “I have had enough!” However, this is not likely because He can’t endure the pain any further, His millenniums of longsuffering prove that, but because He recognizes that any further longsuffering from Him is futile.

In other words, longsuffering is not fruitful to the end of one’s salvation and / or even for the future survival of mankind’s upon the planet. Matthew 24:22 tells us, And unless those days were shortened, no flesh would be saved; but for the elect’s sake those days will be shortened.

In essence, His longsuffering reaches a point whereby it causes more harm than good. Knowing the end from the beginning, He foreknows when that point of no return occurs.

Thus, judgment then comes and fortunately when that scenario happens, some will realize that even in judgment, the Lord is just and righteous. The Holy Scriptures are bountiful in acknowledging that many become saved believers when the wrath of God is poured out upon a Christ rejecting humanity.

As a student of the prophetic Scriptures, I have come to understand that the Lord will destroy several nations and ethnicities, and that He is just in so doing this. I have been taken back by His patience and for a prolonged period of time have prayed the specific supplication of:

“HOW LONG OH LORD, UNTIL YOU CURSE THOSE THAT ARE CURSING ISRAEL?”

The Lord’s foreign policy in this matter is in Genesis 12:3, which says that He will bless those who bless Abraham, but curse those who curse them. This extrapolates down through the generations to the Jewish descendants of Abraham today. This foreign policy is effectually intact.

I prayed over this matter for a longsuffering period. Then, one day, a few years ago, the Lord spoke to me and simply answered my prayer by asking me a simple question. He asked,

“WHAT PART OF I’M A LONGSUFFERING GOD DON’T YOU UNDERSTAND?”

Now the question for the Lord is,

“HOW LONG WILL YOU CONTINUE TO LONGSUFFER BEFORE YOU CURSE THOSE THAT CURSE ISRAEL?”

Stay tuned for the answer to that question….As we see things rapidly deteriorating in the Middle East, we may discover God’s answer very soon!