Locusts, Demons or Drones: Who Are the Locusts of the Fifth Trumpet Judgment?

This article is taken from my book and DVD entitled, “The LAST Prophecies – The Prophecies in the First 3 ½ Years of the Tribulation.”

The Fifth Trumpet Judgment in Revelation 9:1-12 begins a series of three Woe Judgments. Woe means to cause great sorrow or distress. They are aptly called Woes, because these judgments are far worse than the preceding judgments in the Seven-Year Tribulation Period.

“And I looked, and I heard an angel flying through the midst of heaven, saying with a loud voice, “Woe, (5th Trumpet), woe, (6th Trumpet), woe (7th Trumpet), to the inhabitants of the earth, because of the remaining blasts of the trumpet of the three angels who are about to sound!”” (Rev. 8:13; emphasis added) 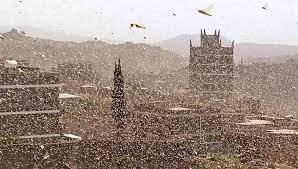 The Fifth Trumpet Judgment starts with a star descending from heaven to earth. This star is a fallen angel named Apollyon who possesses the key to the “Abyss,” which is also referred to as the “Bottomless Pit.” Apollyon is Greek for the Hebrew word Abbadon, which means “Destroyer.”

Apollyon unlocks the Abyss and releases a multitude of locusts. These creatures possess power like the sting of a scorpion. They are commanded not to harm the earth’s vegetation, but only to torment the unbelievers alive at the time. Moreover, the locust are not instructed to kill these unsaved souls, but only to torment them to the point that they desire death!

Fifth Trumpet: The Identity of the Locusts

“The shape of the locusts was like horses prepared for battle. On their heads were crowns of something like gold, and their faces were like the faces of men. They had hair like women’s hair, and their teeth were like lions’ teeth. And they had breastplates like breastplates of iron, and the sound of their wings was like the sound of chariots with many horses running into battle. They had tails like scorpions, and there were stings in their tails. Their power was to hurt men (who are unsaved) five months.  And they had as king over them the angel of the (Abyss) bottomless pit, whose name in Hebrew is Abaddon, but in Greek he has the name Apollyon.” (Revelation 9:7-11)

These five verses provide us with more details into the identity and purpose of the locust invaders. Commentaries are divided as to the true identities of these locusts. Some teach that they are literal locusts, others suggest that they are demons, and more recently, some have presented the possibility that they could be drones.

Are the Locusts of the Fifth Trumpet Judgment Demons?

It is my view that these details enumerated below set them apart figuratively as demons, rather than literally as insects:

It’s interesting to note that the Abyss is a temporary place of imprisonment for fallen angels and demons. Below is a quote about this taken from page 228 of the book entitled, “The Footsteps of the Messiah,” by Dr. Arnold Fructhenbaum.

“The Abyss is a temporary place of confinement for fallen angels and demons. It is the place where demons feared to be sent when they were cast out by Messiah… It is temporary, for the final abode for the fallen angels will be the Lake of Fire.”

The biblical proof of this statement is found in Luke 8:30-33, whereby demons were confronted by Jesus Christ and they pleaded with Him to be able to enter into a nearby herd of swine rather than be cast into the dreadful Bottomless Pit.

Therefore, when these demons of the 5th Trumpet Judgment are unleashed from this terrifying zip code, it can be anticipated that they will come on the scene with a vengeance. 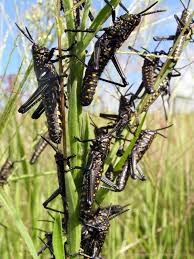 2. They have power like scorpions, (v3), to strike men, (v5, v10) – Locusts don’t even bite people, let alone sting or strike them like a scorpion.

3. They follow instructions not to “harm the grass of the earth, or any green thing, or any tree,” (v4) – since locusts feed upon foliage and stems of plants such as herbs and grasses, it’s not reasonable to assume they will ignore these fine locust delicacies.

4. These locusts of the Fifth Trumpet Judgment in no way resemble real locusts: (v7-9)  –

a. They are shaped like horses prepared for battle,

b. On their heads were crowns of something like gold,

c. Their faces were like the faces of men,

5. They are ruled by a fallen angel named “Apollyon,” (v11) – Demons have fallen angel friends, but not locusts.

Are the Locusts of the Fifth Trumpet Judgment Drones?

Some Bible prophecy teachers have suggested that these locusts are drones. In fact, as the headline below reveals, there is a drone program named “Locust.”

One of the primary prophetic details that some believe identifies drones in the Fifth Trumpet Judgment is found in the verse below.

These advocates who believe the locusts are drones suggest that the, “breastplates like breastplates of iron, and the sound of their wings was like the sound of chariots with many horses running into battle,’’ implies that these are likely drones.

If this was the only detail about these locusts, then their idea could have credibility. However, there are many other details scattered through Rev. 9:1-11, that I believe mitigate against this possibility.

Some of the problems with this teaching are bullet pointed below.

• The majority of breastplates for human soldiers have been made of bronze or iron for centuries. Thus, this is not a new or unique detail that can only now be attributed to drones.

• The Locusts originate from the smoke that comes out of the Abyss, rather than a drone manufacturing factory somewhere. (Rev. 9:2-3)

• The commander of these locusts is the fallen angel named Apollyon rather than a drone programming specialist. (Rev. 9:11)

• The Locusts only torment men for five months, which poses the question: “Will a drone know the limits between killing and tormenting someone?” One tormented person that dies at the hands of a drone seemingly nullifies this entire theory. The pertinent verse is below.

“In those days men will seek death and will not find it; they will desire to die, and death will flee from them.” (Rev. 9:6)

It is difficult to think that a drone would know its limitations to be in compliance with this prophetic detail.

• Will a drone be able to determine who is an unbeliever, which is someone not possessing the “Seal of God?” The locusts receive specific instructions in the verse below.

“They were commanded not to harm the grass of the earth, or any green thing, or any tree, but only those men who do not have the seal of God on their foreheads.” (Rev. 9:4; emphasis added)

It would seem that determining who has the Seal of God would require spiritual rather than technological discernment. Such selectivity is something that apparently Apollyon possesses as the commander of the tormenting locusts. If the locusts are demons, which is what I and some others believe, then the locust would also perhaps have the ability to decipher who to torment.