The Antichrist’s 4-Day Trip to Jerusalem

As the image below illustrates, several powerful predicted events take place during the midpoint of the Seven-Year Tribulation Period. The prophecies are all compacted into an extremely short time span. Be it a day, week or on the outside chance maybe a couple of months, they all happen suddenly. 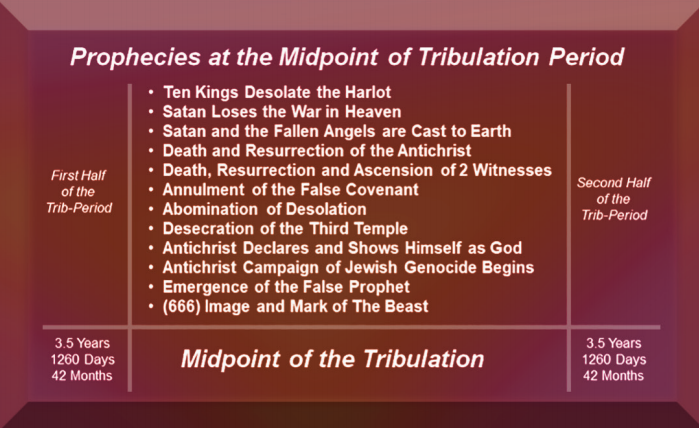 This article focuses on the specific events that require the Antichrist to travel to Jerusalem at the midpoint of the Tribulation.

Setting the Stage for the Jerusalem Trip

The global religion of Ecclesiastical Babylon in Revelation 17 has become a burden for the Antichrist and his recently appointed Ten Kings. As such, these ten world leaders, at the behest of the Antichrist, desolate this religion.

“And the ten horns which you saw on the beast, these will hate the harlot, make her desolate and naked, eat her flesh and burn her with fire.” (Rev. 17:16)

With the Harlot queen dethroned, the Antichrist king can be enthroned in her place. As the Antichrist prepares to take his seat upon his worldly throne something goes terribly wrong and he receives a fatal head wound that sends him into the lowly grave at the bottomless pit. This deadly wound is described in Rev. 13:3, 12, 14.

Meanwhile, in an entirely different domain, Satan wages war in heaven with Michael the Archangel. The Devil is no match for his archrival and he and his fallen angels get defeated, evicted and cast down to the earth.

Upon touching down upon the earth, the Devil dragon has to resurrect his beast the Antichrist from the dungeon of the bottomless pit before he can put his earthly campaign of deception into operation.

“The dragon gave him his power, his throne, and great authority. And I saw one of his heads as if it had been mortally wounded, and his deadly wound was healed. And all the world marveled and followed the beast. So they worshiped the dragon who gave authority to the beast; and they worshiped the beast, saying, “Who is like the beast? Who is able to make war with him.” (Rev. 13:2b-4)

Rising from the grave, the majority of mankind marvels at this miracle and begins following and worshipping the Antichrist. They say, “Who is like the beast? Who is able to make war with him?” The mindset of the unsaved masses at this point is summed up below.

“And those who dwell on the earth will marvel, whose names are not written in the Book of Life from the foundation of the world, when they see the beast that was, (alive), and is not, (was killed), and yet is, (resurrected).” (Rev. 17:8b, NKJV; emphasis added)

The Resurrected Antichrist Goes to Jerusalem

By the middle of the Tribulation, Israel in general, and Jerusalem more specifically, is a happening place.

1. The Jews are performing sacrifices and offerings in their Third Temple.

2. Israel has gained world renown from the aftermath events of the failed invasion of Ezekiel 38-39, whereby:

a….R ssia, Turkey, Iran and a coalition in total of nine populations were divinely defeated – (Ezekiel 38:19-22),

3. The Two Witnesses are:

All of the above is problematic for the Antichrist, who is on a quest to be worshipped worldwide as the god of the earth. The elimination of Ecclesiastical Babylon eliminated the global religion, but Judaism and Christianity also need to be eradicated. Therefore, the Two Witnesses need to be killed and the Judaism needs to be stopped. These two major obstacles will require the Antichrist to travel to Jerusalem.

With his private jetliner fully fueled and his motorcade awaiting his arrival in the holy land, the Antichrist sets up his trip itinerary. Indulge me to take some author liberties and present below, a possible timeline sequence of how the Antichrist’s schedule in Jerusalem might go. I will select Friday randomly as a day to start the prophetic series of events:

Friday night – The Antichrist returns to his hotel suite, turns on his TV and watches the world rejoice over his killing of the Two Witnesses. He can’t be prouder of himself because he has sweetened his resume by having done something that nobody before him was able to accomplish. He has eliminated public enemies #1 and #2 and his followers are dancing in the streets around the world. Moreover, his followers are exchanging gifts and exclaiming, “Who is like the beast? Who is able to make war with him?”

An important side note: While the Two Witnesses were alive, they tormented the unsaved masses with their plagues. Simultaneously, the Seven Trumpet Judgments of Rev. 8-9 were also happening. Some of these judgments resembled the plagues that the Two Witnesses were capable of causing. It is likely that the Antichrist worshippers will be under the impression that with the elimination of the Two Witnesses, the plagues will be over and the period of their torment will have ended. Little do they realize that coming head on at them will be the Seven Bowl Judgments of Rev. 16.

An important side note: It’s important to note that Matt. 24:16-20 commands the Jews to flee immediately when the above actions happen. Moreover, this passage issues a woe to those who are pregnant and nursing babies. It also instructs to pray that this eventful day is not in the winter or on the Sabbath.

These alerts are because the above Antichrist Temple activities signal that this beast is about to initiate a campaign of Jewish genocide. For obvious reasons, a woman would not want to be fleeing with a baby. Also, on the Sabbath all public transportation shuts down making travel for many unavailable, and in the winters there can be flooding that prohibits safe passage for these Jewish exiles.

Saturday night – The Antichrist returns to his hotel and turns on his TV to see the world’s reaction to his Temple activities. They are likely rejoicing doubly now. The Two Witnesses are still dead, Judaism has ended and their hero has performed some sign or wonder that proves himself as god.

What is it that changed the mindsets of these three kings? I speculate that they were fine with the political, economic and military goals of the Antichrist, but they found discord with his requirement of worshipping him as their god.

“Now after the three-and-a-half days the breath of life from God entered them, and they stood on their feet, and great fear fell on those who saw them. And they heard a loud voice from heaven saying to them, “Come up here.” And they ascended to heaven in a cloud, and their enemies saw them.” (Rev. 11:11-12)

Immediately he assembles his motorcade and heads back to the scene of the crime. Upon arriving he is astonished to see these Two Witnesses ascending upward into heaven. He and his assassins shoot a barrage of bullets up into the air to prevent their ascent to no avail. He can’t repeat his performance from Day 1!

Monday afternoon – Returning angrily to his suite, the Antichrist experiences his hotel swaying severely from side to side. The mother of all earthquakes up to that point had rocked the great city of Jerusalem.

“In the same hour there was a great earthquake, and a tenth of the city fell. In the earthquake seven thousand people were killed, and the rest were afraid and gave glory to the God of heaven.” (Rev. 11:13)

He turned on his TV and there was no connection. He looked out his window and saw that several nearby buildings had collapsed. He knew the gift-giving around the globe would stop and he would have some heavy explaining to do to his worshippers. What had started out as a trip to remember had suddenly became a memory to forget.

He knew that when he returned back to his headquarters he would need to hook up with the False Prophet to remedy the situation. Together this diabolical duo would embark upon a global religious and economic campaign that would reunite his worshippers to pledge their continued allegiance to their cause. The Devil, his seed the Antichrist and their friend, the False Prophet, had more supernatural tricks in their bag and the time had come to show them off.

WATCH THE 19-MINUTE TEACHING VIDEO FOR THIS ARTICLE BELOW.

Both the Book & DVD are Now Available

The FINAL Prophecies DVD
has just been released!