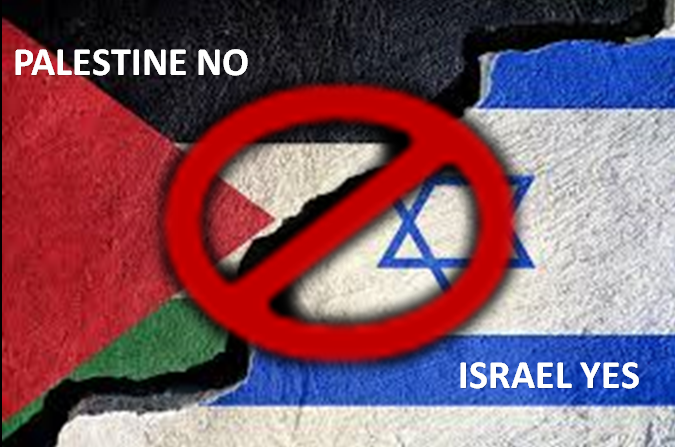 In a perfect world whereby everyone:

1. Loves God with all their heart, soul and mind,
2. Treats their neighbor like they take care of themselves,
3. Leans not on their own understanding, but entirely trusts the Lord for guidance,
4. Etc. Etc. Etc.,

there could exist the possibility for the coexistence of an Israeli and Palestinian state living side by side. However, that baby went out with the bathwater over four-thousand years ago, when Hagar, Ishmael and Esau all rebelled against the Abrahamic Covenant.

The Ancient Arab Hatred of the Jews 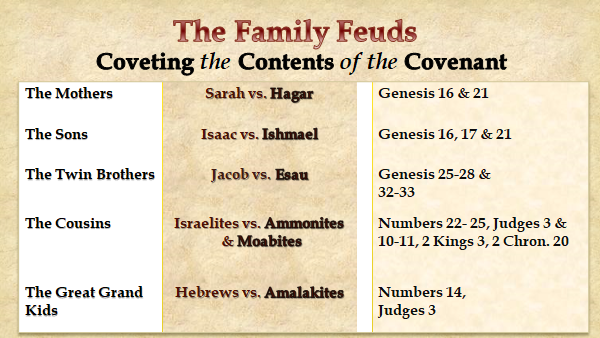 These infamous historical characters of the Bible felt cheated out of the rich contents of this unconditional covenant, which was given by God to Abraham on behalf of the salvation of mankind. When the Lord told Abraham in Genesis 22:18, Isaac in Gen. 26:4 and Jacob in Gen. 28:14 that through their “seed” all the families of the earth would be blessed, this didn’t bode will these three and several other key family members. As a result family feuds developed as indicated in the image.

The Palestinians are a mish-mash of people, and within their population are some who are descendants from Ishmael, who is sometimes referred to as the “father of the Arabs,” and Esau. These two Arab patriarchs coveted the rich contents of the Abrahamic Covenant and feeling cheated, they spawned a hatred of the Jews that was passed on through their descendants and is alive in the Mideast today.

The Bible calls this an ancient hatred or perpetual enmity as per Ezekiel 25:15 and 35:5. In Hebrew the words for this are “Olam Ebah,” which can be translated as, “A condition of hatred stemming back long ago in ancient times, that became more violent as time went on and it burgeoned into an enmity that will not end.”

With this preface it’s important to understand that in order for a two-state solution to become a viable option for Mideast peace, the “Olam Ebah” must cease to exist!

Islam and the Ancient Arab Hatred of the Jews

Complicating the two-state scenario is the fact that the ancient Arab hatred of the Jews has become deeply embedded into Islam that teaches things like in Surah 5:51, which says,

“O you who have believed, do not take the Jews and the Christians as allies…”

According to the translation by Sahih International this Surah means that “Muslim believers should not ally with Christians or Jews against other Muslim believers; because they are not loyal to Muslim believers, but only loyal among themselves.” (1)

Another, and much more dangerous, Anti-Semitic Islamic teaching is quoted below:

“In Saheeh Muslim (2922), it is narrated from the hadith of Abu Hurayrah that the Messenger of Allah (blessings and peace of Allah be upon him) said: “The Hour will not begin until the Muslims fight the Jews and the Muslims will kill them, until a Jew hides behind a rock or a tree, and the rock or tree will say: O Muslim, O slave of Allah, there is a Jew behind me, come and kill him. Except the gharqad (a thorny tree), for it is one of the trees of the Jews.”” (2)

The Two-State Solution and the International Community

The preponderance of the international community, including the Muslim nations and especially the Arab states, seeks a two-state solution. In modernity, several former American presidents, namely Bill Clinton, George W. Bush and Barrack Obama, have unsuccessfully attempted to make this happen.

Presently, this lack of Mideast peace problem has festered to a point whereby Israel is seriously considering annexing portions of territory in the West Bank. The potential of this unilateral undertaking has got the international community alarmed and the Palestinians and their Arab cohorts in an outright uproar.

Although, I think it’s debatable whether the Palestinians and the Arab states actually even want Israel to continue to exist at all, let’s play the two-state scenario out. After all, this is what the majority of the world leaders believe is the only conceivable answer to the Israeli-Palestinian dilemma. These politicians expect that ideally in a two-state scenario that the Jews and Palestinians will adopt a policy of acceptance, respect and hopefully compassion towards one another.

First, both sides would need to commit to a whole-hearted attempt to patiently work through the religious, cultural, geographical, economical, socio-political and geo-political divides. This would require a willingness to turn the other cheek when some bad apple, be he a Palestinian or Jew, commits an act of terror in an attempt to thwart the peace process. It would also mean that the Hamas would need to abandon their charter with the following preamble:

‘Israel will exist and will continue to exist until Islam will obliterate it, just as it obliterated others before it.‘ (3)

Second, it would require the Palestinians to stop teaching their children to hate the Jews and referring to the Jews as the sons of pigs and apes. It would also mandate that the Palestinian school textbooks include maps of Israel in them. 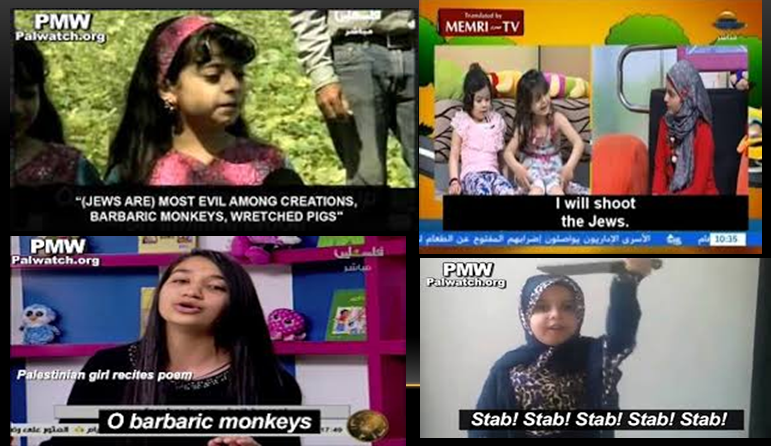 Third, well I could continue on with more requirements, or simply end it here, because the following reasons inform why two states won’t work:

1. The ancient Arab hatred of the Jews by its biblical definition will not end, which means that:
a. the Palestinians will never stop teaching their children to hate the Jews,
b. diplomacy will fail and military might will prevail,
c. the IDF will have to wipe out their enemies that are infected by this Olam Ebah disease.

2. The misleading influence of the Arabs, who already have their own states. The Arab states have deluded the Palestinians into thinking that they also are entitled to their own Arab state. This is not biblically endorsed and it gives the Palestinians a false hope that prevents them from conceding any territories that they occupy. This dangerous scenario was predicted in Obadiah 1:7. I have written about this prophecy in an article entitled, “Prophecy: Palestinians to be Forced to Israel’s Borders!”

3. The satanically embedded Anti-Semitism within the precepts of Islam. This was previously mentioned in this article. 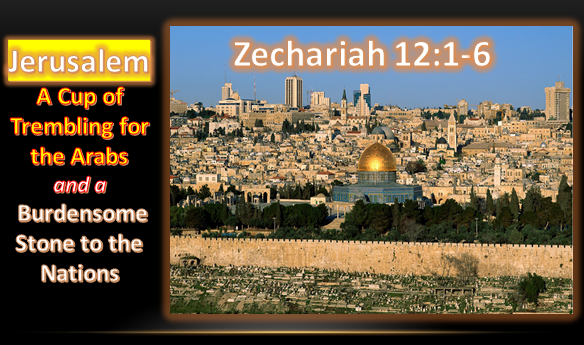 5. The biblical prophecies, which will not go unfulfilled. Like the Obadiah and Zechariah prophecies listed above, there are numerous other ones that point out that Israel will defeat their Arab foes militarily. I write about these prophecies in my book entitled, The NOW Prophecies.