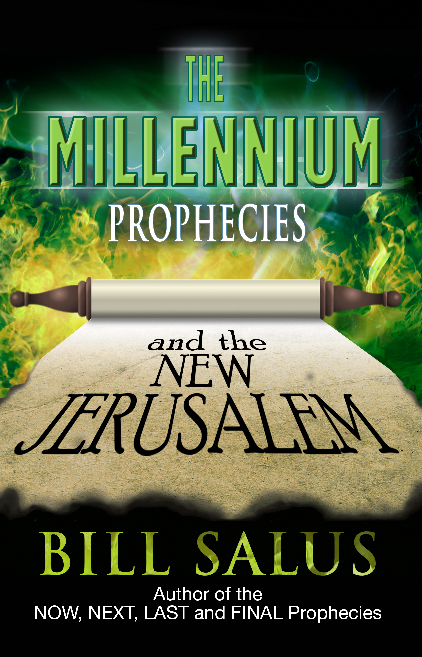 This article is taken from my book entitled, The MILLENNIUM Prophecies and the NEW JERUSALEM.

Imagine it’s sometime in the not-so-distant future, let’s ARBITRARILY take the year 2030 AD. Envision at this randomly selected time that seven years of divine judgments have passed between, (2023-2030 AD), that have virtually rendered the planet uninhabitable. Major seas, rivers and streams were turned to blood, greatly diminishing the drinking water supply. Additionally, massive fires and scorching heat have burned up a majority of the vegetation, eliminating most food sources.

As if the above was not bad enough, throw into the equation that one-third of mankind has been killed by a two-hundred million strong army of demons, the global economy has collapsed and a great earthquake has destroyed major cities, toppled tall mountains and detached every island from its foundation. Add into the mix as a final measure, a barrage of 100-pound hailstones have pummeled what was left of the depleted planet and killed many more within mankind.

These treacherous seven years of severe tribulation has caused the assembling of the most formidable array of world armies at Armageddon for “the battle of that great day of God Almighty,” which is prophesied in Revelation 16:14. Unbelievably, after all the devastation identified in the two paragraphs above, Satan, the Antichrist, the False Prophet have somehow convinced most of humanity that it can win a war against God and bring about an end to His  judgments!

ROLL, CAMERA ACTION!!! WHAT HAPPENS NEXT?

Some of you might be thinking this above story makes for a good Hollywood movie script, but quite to the contrary, the above scenario is the foretold climactic conclusion predicted in the Bible that leads to the SECOND COMING of JESUS CHRIST!

As the biblical story be told, it will turn out that this devilish trio will quickly discover they have made a grave miscalculation, this unholy trinity will learn the hard way that this final war they will wage CANNOT be won!

“And I saw the beast, (Antichrist) the kings of the earth, and their armies, gathered together to make war against Him (Jesus Christ) who sat on the horse and against His army. Then the beast was captured, and with him the false prophet who worked signs in his presence, by which he deceived those who received the mark of the beast and those who worshiped his image. These two were cast alive into the lake of fire burning with brimstone.” (Revelation 19:19-20, NKJV; emphasis added)

The GOOD NEWS is JESUS CHRIST RETURNS and WINS, but the not so good news is that He inherits a world, that for all intents and purposes is unfit for human habitation. As the opening paragraphs explained, the earth will be essentially destroyed and in desperate need of restoration. There is no way that the Messianic Kingdom with all of its wonderful perks can commence until the planetary mess is mopped up.

How long will this global renovation take? The Genesis account says that God created the world in six-days, but according to the prophet Daniel, the restoration of the planet to Garden of Eden-like conditions, will take seventy-five days.

One of the lesser taught prophetic time periods is this Seventy-Five Day Interval. This interval period appears to pave the way for the establishment of the Millennial Reign of Jesus Christ. We are introduced to this time-period in Daniel 12:11-12. 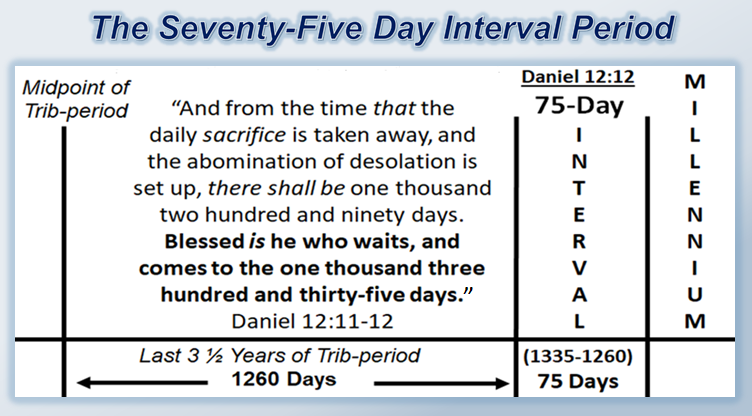 “And from the time that the daily sacrifice is taken away, and the abomination of desolation is set up, there shall be one thousand two hundred and ninety days.Blessed is he who waits, and comes to the one thousand three hundred and thirty-five  days.” (Daniel 12:11-12)

Daniel informs that whoever survives these additional seventy-five days will be blessed. This is because those who somehow manage to live through the Seven-Year Tribulation Period and Seventy-Five Day Interval will enter into the Millennium and populate the nations. The inference is that some will be transported into the Messianic Kingdom, but others won’t. Who receives a passport into the Messianic Age and who fails to make the cut, is covered in my MILLENNIUM Prophecies book 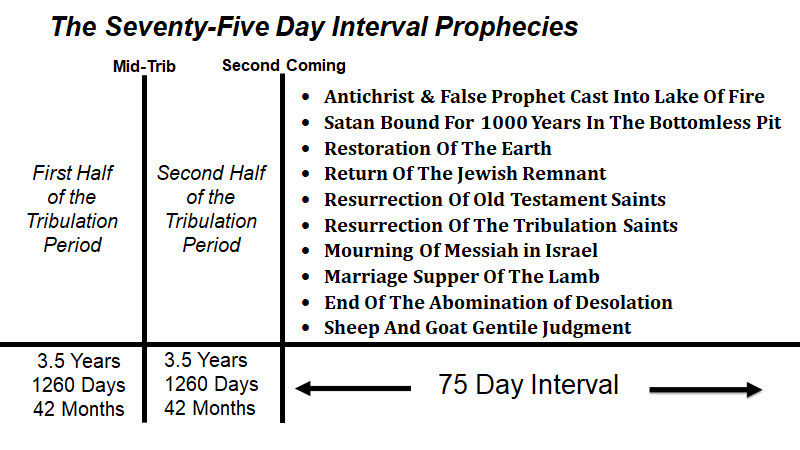 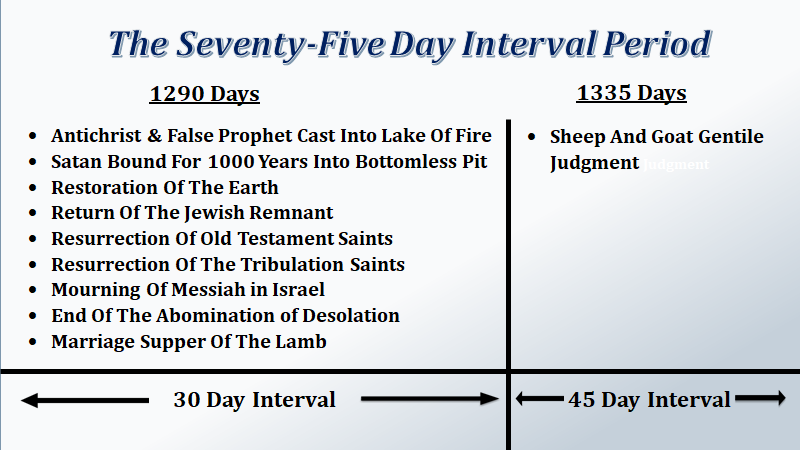 This image splits these ten prophecies into the likely time frames that they occur. Daniel 12:11 informed that the Abomination of Desolation would stand in place for 1290 days, which establishes the first division of time of within the 75-Day Interval of 30 days. Then, Daniel 12:12 adds the additional time increment of 45 days to total 1335 days and conclude this interval period.

It’s troubling to note that for 30 days of Christ’s presence upon the earth the Image of the Beast, if that’s what the Abomination of Desolation represents, is still standing in the Third Jewish Temple, a.k.a. the Tribulation Temple. Bible prophecy experts, such as Dr. Tony Garland and Dr. Thomas Ice believe that the Abomination of Desolation is the Image of the Beast.

“The abomination of desolation, which the reader is to understand, includes the following elements:

1. It occurs in the Jewish Temple in Jerusalem,
2. It involves a person setting up a statue in place of the regular sacrifice in the holy of holies,
3. This results in the cessation of the regular sacrifice,
4. There will be a time of about three-and-a-half years between this event and another event and the end of the time period,
5. It involves an individual setting up a statue or image of himself so that he may be worshipped in place of God,
6. The image is made to come to life.” (Quote from Dr. Thomas Ice)[i]

“This act of entering the Holy Place and setting up the image is most likely what Jesus had in mind as the abomination of desolation that signals Jews to flee Jerusalem in haste because of the latter half of the Tribulation period is characterized by the severe persecution of the Jews.” (Quote from Dr. Tony Garland)[ii]

If Garland and Ice are correct, and there are many others who agree with them, this implies that even though the Antichrist has already been cast alive into the Lake of Fire, those civilians who still reside on the earth, who had previously worshipped the Beast and received his Mark, can still temporarily worship his image. Remember that the soldiers, and not necessarily all of the civilians, get defeated at Armageddon.

I personally believe these Antichrist worshippers will be fleeing far from the face of Jesus Christ, rather than worshipping the Image of the Beast, but the fact is that the Abomination of Desolation exists in place for the first 30 days of the 75-Day Interval. Jesus Christ will destroy it on day thirty. Somewhere around that time frame He will set up His throne in Jerusalem.

“At that time Jerusalem shall be called The Throne of the Lord, and all the nations shall be gathered to it, to the name of the Lord, to Jerusalem. No more shall they follow the dictates of their evil hearts.” (Jeremiah 3:17)

These marked by the Beast civilians are unsaved and represent the Goat Gentiles of Matthew 25:32-33 and 41-46 that are ultimately destined to be judged just prior to the end of the Seventy-Five Day Interval. They will not be allowed to enter into the MILLENNIUM because only the saved Sheep Gentiles are afforded this privilege. Thus, these Sheep Gentiles of Matthew 25:32-33 and 34-40 are the “Blessed is he who waits, and comes to the one thousand three hundred and thirty-five days.”

At the end of the Seven-Year Tribulation Period, JESUS CHRIST is RETURNING! In just seventy-five days, He will:

1. Mop up the planetary mess caused by the Seal, Trumpet and Bowl judgments during the Seven-Year Tribulation Period,
2. Get rid of the unholy trinity and slaughter the unsaved Goat Gentiles who bear the Mark of the Beast,
3. Restore the planet to its early beginnings,
4. Return the faithful Jewish Remnant to their homeland in Israel,
5. Resurrect the Old Testament and Tribulation Saints,
6. Comfort the Jewish people who will be mourning for Him who they had pierced as per Zechariah 12:10,
7. Enjoy the Marriage Supper of the Lamb with His Bride, the Church,
8. Destroy the Abomination of Desolation, (Image of the Beast),
9. Establish His throne in Jerusalem.

Presently, dear reader, you fall into one of the four categories that will play a part in the Seventy-Five Day Interval.

Category #1: If you are a believer in the Church Age, you will be the Bride at the Marriage Supper of the Lamb.

Category #2: If you become a believer in the Tribulation Period and are martyred you will be resurrected along with the Old Testament Saints. Both resurrected groups will be among the honored guests at the Marriage Supper of the Lamb.

Category 3: If you become a believer after the Rapture, and survive the Christian martyrdom in the Tribulation Period, you will be identified as a Sheep Gentile, and will be identified among those blessed to come “to the one thousand three hundred and thirty-five days.”

Category 4: If you are not a believer in the Church Age and don’t become a believer prior to the Second Coming of Jesus Christ, you will not survive to the one thousand three hundred and thirty-five days, and you will regret it for the rest of eternity. Ultimately, through a process of events, your name will be blotted out of the Book of Life and you will wind up cast alive into the Lake of Fire to join with Satan, the Antichrist and the False Prophet according to Revelation 20:11-15. 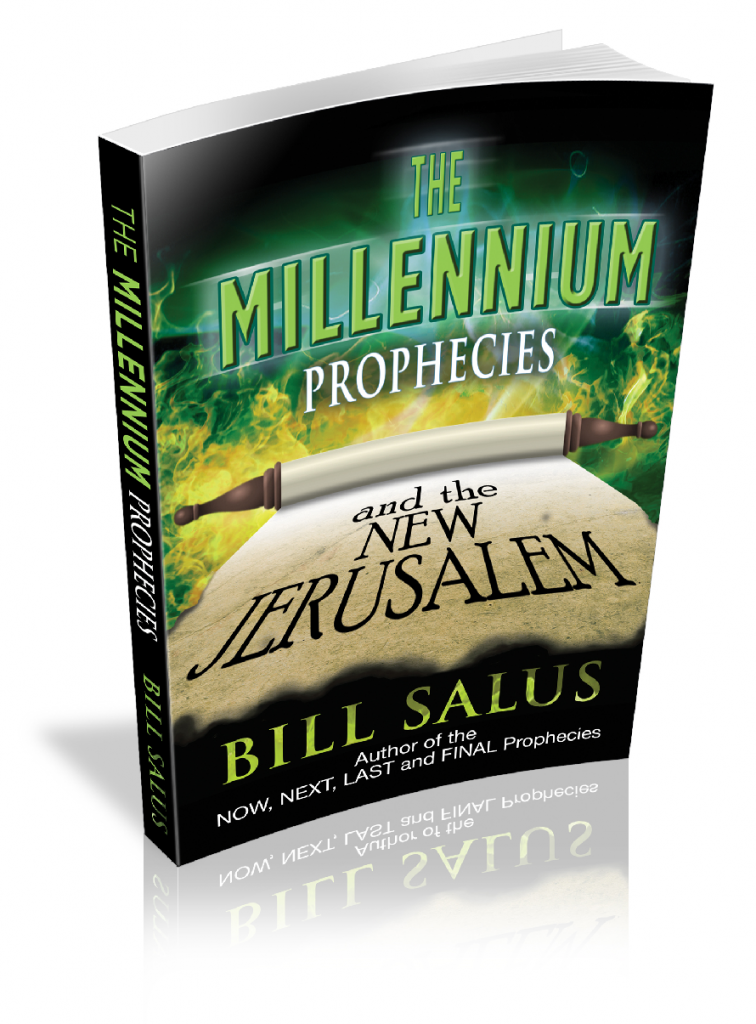 CLICK HERE to purchase The MILLENNIUM Prophecies and the NEW JERUSALEM book for $17.95 + S & H