Israel Mourns the Messiah, the Abomination of Desolation Ends and the Millennial Temple Begins

This article is taken from my book entitled, The MILLENIUM Prophecies and the NEW JERUSALEM.

(Watch the video teaching for this article below)
The Bible foretells the coming of an intense 30-day period. Within a one-month interval the powerful events sequenced below are predicted to happen. This article will separate out and explain the three color highlighted ones:

The Mourning Of The Messiah In Israel

(The Thirty Days Of Mourning)

These verses imply that prior to this period of national mourning, the Old Testament Saints will have been previously resurrected. This would include the family households of David, Nathan, Levi and Shimei and their respective wives.

This national mourning will likely occur for the duration of the first thirty days of the Seventy-Five Day Interval Period. Thirty days of grieving finds historical precedent in the cases of Moses, a prophet, and his brother Aaron, a priest.

“So Moses the servant of the Lord died there in the land of Moab, according to the word of the Lord. And He buried him in a valley in the land of Moab, opposite Beth Peor; but no one knows his grave to this day. Moses was one hundred and twenty years old when he died. His eyes were not dim nor his natural vigor diminished. And the children of Israel wept for Moses in the plains of Moab thirty days. So the days of weeping and mourning for Moses ended.” (Deuteronomy 34:5-8)

“Now when all the congregation saw that Aaron was dead, all the house of Israel mourned for Aaron thirty days.” (Numbers 20:29)

“Then those men, when they had seen the sign that Jesus did, said, “This is truly the Prophet who is to come into the world.”” (John 6:14)

“Where the forerunner has entered for us, even Jesus, having become High Priest forever according to the order of Melchizedek.” (Hebrews 6:20)

End Of The Abomination Of Desolation

(The End Of The Mark Of The Beast)

Meanwhile, it seems that throughout the national mourning period of Israel above, the Abomination of Desolation that was set up by the Antichrist at the Midpoint of the Tribulation Period is still standing in the Third Jewish Temple. We discover this in the verse below.

“And from the time that the daily sacrifice is taken away, and the abomination of desolation is set up, there shall be one thousand two hundred and ninety days.” (Daniel 12:11).

“This act of entering the Holy Place and setting up the image, (of the Beast), is most likely what Jesus had in mind as the abomination of desolation.”  Dr. Tony Garland

“The abomination of desolation includes the setting up a statue or image of himself, (the Beast), so that he may be worshipped in place of God.” Dr. Thomas Ice

The continued existence of the Abomination of Desolation will likely intensify those grieving in Israel. On the one hand the Messiah is dwelling among them, but so is the Image of the Beast and even more troubling, so are those bearing the Mark of the Beast. These are among the unbelievers that will soon be judged and eliminated in the Goat Gentile Judgment of Matthew 25:31-46.

(The Fourth And Final Jewish Temple)

Below is an illustration of the design of the Millennial Temple from my book entitled, The MILLENNIUM Prophecies and the NEW JERUSALEM. 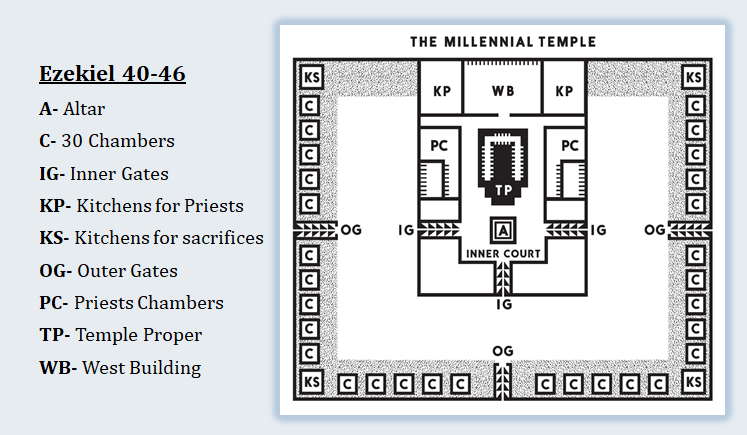 According to the passages below, The Millennial Temple will be in Jerusalem and it will serve as the location of the Throne of Messiah.

“At that time Jerusalem shall be called The Throne of the Lord, and all the nations shall be gathered to it, to the name of the Lord, to Jerusalem. No more shall they follow the dictates of their evil hearts.” (Jer. 3:17)

“The Spirit lifted me up and brought me into the inner court; and behold, the glory of the Lord filled the temple. Then I heard Him speaking to me from the temple, while a man stood beside me. And He said to me, “Son of man, this is the place of My throne and the place of the soles of My feet, where I will dwell in the midst of the children of Israel forever.”” (Ezek. 43:5-7b)

The three major coming events described in this article are just a sample of what happens in what will undoubtedly be the craziest future 30-days on the planet.

Be sure to reserve your front row seat for this incredible month-long period of festivities. GET SAVED NOW, during the Church Age, and you will have a special role as the Bride of Christ when He returns. You will serve as a king and a priest and reign alongside Jesus Christ throughout the entirety of the MILLENNIUM!

“To Him who loved us and washed us from our sins in His own blood, and has made us kings and priests to His God and Father, to Him be glory and dominion forever and ever. Amen.” (Revelation 1:6)“This is a faithful saying: For if we died with Him, We shall also live with Him. If we endure, We shall also reign with Him. If we deny Him, He also will deny us.” (2 Timothy 2:11-12) 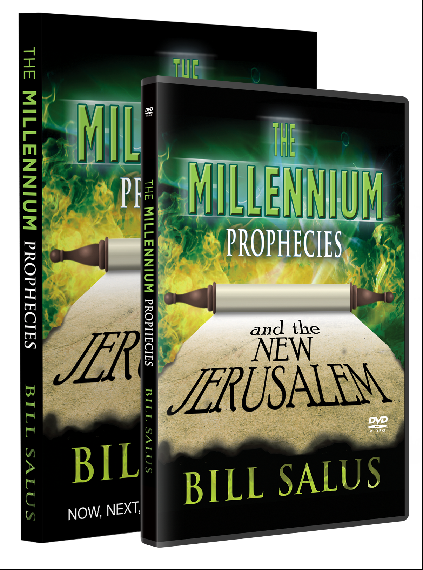 (WATCH THE MILLENNIUM PROPHECIES AND THE NEW JERUSALEM TRAILER BELOW)