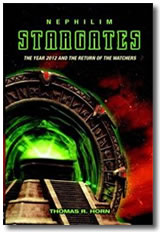 This “Age of Turbulence”, as former Federal Reserve chairman Alan Greenspan calls it, has many people wondering if they have been involuntarily thrust into the treacherous last days? In their sincere quest for a future filled with hope Americans have become increasingly disenchanted with failed familiar secular solutions.

Humanity justifiably wonders if this worldwide apocalyptic economy will lead to a one-world banking system and ultimately the mark of the Antichrist condition referenced in Revelation chapter 13 of the Bible, whereby every man, woman, and child will be forced to receive a computer chip in their hand or forehead in order to buy or sell even the most basic staples of life.

As this world seemingly spins out of control the harvest field is fertile with weary souls seeking sound answers, and bestselling authors Tom Horn and Bill Salus, with their two respective books have not disappointed them. Together in the most timely manner they have infused inspired new thinking into the last days Christian Church?

With a terrorist driven Arab – Israeli war obviously about to erupt in the epicenter of the Middle East, and the days of Noah Nephilim about to massively invade the earth, their cutting-edge books hit the shelves with SUDDEN IMPACT. As one reads these groundbreaking top sellers, both of which take a reinvigorating new look at old forgotten prophecies, he or she can’t avoid asking the question, has the world hourglass made its final turn?

In Bill’s brand new book Isralestine, The Ancient Blueprints of the Future Middle East, he emphatically declares that these are the days of Terrorism, which is the ugly byproduct of the Arab-Israeli conflict, and the Bible screams volumes about both subjects. He takes his readers through an exhaustive look at the Psalm 83 Arab – Israeli war, and cautions the world to watch for this event to be the next Middle East news headline.

Similary with Tom Horn’s bestseller, Nephilim Stargates, The Year 2012 And The Return Of The Watchers, he enlightens his readers to the possibility that a massive demonic invasion could come upon the earth suddenly on some nearby morning in fulfillment of an Ancient Enoch prophecy.

Nephilim Stargates immediately caught the attention of Steve Quayle of the Q-files international radio fame, who just recently posted an outstanding five part radio interview with Tom Horn. The series concludes with the host commenting “that these five interviews represent the finest hours in his entire 30 year radio career!”

In these volatile times whereby the world wonders if America is on the verge of third world-war-welfare status. What has the Church to say about such a never before time as this?

It isn’t difficult to peruse the bookstore shelves and find Christian prophecy books reinforcing the worlds worrisome last days woes. Popular subjects, like the American Apocalypse, Armageddon, the 666 Antichrist, and the Ezekiel 38 Russian – Iranian invasion of Israel compete for shelf space, but are there conditions precedent readied to blatantly blast out?

Why do popular eschatologists continuously struggle to jump-start their end time equations into real time application? Does their prophetic pedal fail to meet the metal because they miss the Psalm 83 piece of the end times puzzle, and the return of ancient Enoch’s Nephilim watchers?

World respected prophecy expert Dr. David Reagan of Lamb and Lion ministries introspects and declares that he can’t recall any book but Isralestine that plays “the Psalm 83 card”! Why not? At a time when Prophecy Buffs are becoming a dime a dozen, and sensationalist misleadingly suggest “America might be the Babylon of the book of Revelation”, how did they miss todays most relevant Psalm 83 Bible prediction.

Kindly Salus says, “the reason the experts apparently overlooked this paramount prophecy is that Psalm 83 is formatted as a petition only”. He says that “unlike prophecies like the Ezekiel 38 & 39 invasion of Israel, whereby all the event details are given from start to finish, the Psalm 83 prophecy requires a diligent time consuming research throughout the entirety of the Old and New Testaments”.

His five-year masterful work does exactly that. Inside the book you will find numerous interconnecting Psalm 83 prophecies that scholars had either allegorized or abandoned, reopened for an investigative and invigorating second look.

Find out how the Hebrew prophets Jeremiah and Obadiah worked together to warn us about modern day Terrorism, and what they declare will be its determined outcome. Discover where and why Ezekiel foretells the coming of the Israeli Defense Forces and how he predicts these forces will soon evolve into an exceedingly great army. Be reminded by the book of Genesis that contrary to international agendas, Israel is about to burst out beyond its territorial seams. These are just a handful of the many newsworthy discoveries that are contained in these Ancient Blueprints of the Future Middle East.

Although he details a differing event than Salus, similar thought provoking finds are contained in Horn’s book, that have now elevated him to the expert rung of the extra-terrestrial ladder. Magically he connects the mystical dots between the pre-flood Days of Noah, and the imminent re-emergence of their demonic descendants.

For certain both Nephilim Stargates, and Isralestine contain the end time missing prophecy puzzle pieces that almost alluded the Church’s grasp. If you are hungry to know how nearby geo and theopolitical events in the world theater are about to dramatically affect your life, then you will definitely want to read these two highly recommend books.