God’s Roadmap Plan to Peace in the Middle East 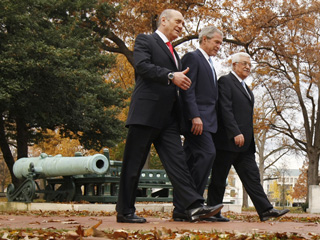 The epicenter, as author Joel Rosenberg calls it, in the Middle East continues to shake, quake, and bake the International Community. Daily news headlines emanate from the world’s most problematic region, like magnitude 6.0 aftershocks on the “Richter Scale”! The seismic activity of the Arab – Israeli conflict threatens to push humanity over the fault’s edge, and has it wondering if the hourglass has made its final turn.

Are the sands of time nearing their end in the Middle East? One thing is for certain the accelerating volatility in that region has the Bush administration pushing the “Roadmap Plan” to the top rung of the political ladder. Secretary of State Condoleezza Rice continues to accumulate more frequent flier miles, making the Middle East her favorite back yard, while President Bush sits at the round table playing “high stakes” poker with Ehud Olmert and Mahmoud Abbas.

For those of you who are unfamiliar with the “Performance-Based Roadmap to a Permanent Two-State Solution to the Israeli-Palestinian Conflict” better known as the “Roadmap Plan”, you can read the U.S. Department of State press statement prepared April 30, 2003 online at http://www.state.gov/r/pa/prs/ps/2003/20062.htm (accessed 3/1/08).

To date this plan stands out as humanities best effort to provide a comprehensive solution to a complicated problem. Unfortunately the “Roadmap Plan” attempts to override a more suitable plan already in place. An Architect with Divine fingerprints drafted the perfect Performance-Based plan. It had been sealed up in a Jeremiah prophecy for approximately 2500 years, and was dusted off and implemented in the 20th century.

The prophecy quoted below decrees that at the appointed time, the Jewish people would be re-established in the land of ancient Israel, regardless of how their Arab and Persian partners in the neighborhood feel about the matter. Using the Hebrew vernacular of his time he did his best to describe for us today, God’s Roadmap Plan for Peace in the Middle East.

Thus says the LORD: “Against all My evil neighbors who touch the inheritance which I have caused My people Israel to inherit—behold, I will pluck them [the Arabs] out of their [the Jews] land [Israel] and pluck out the house of Judah from among them [the surrounding Arab nations]. Then it shall be, after I have plucked them out, that I will return and have compassion on them and bring them back, everyone to his heritage and everyone [Jew and Arab] to his [respective] land. And it shall be, if they [the resettled Arabs] will learn carefully the ways of My people, to swear by My name, ‘As the LORD lives,’ as they taught My people to swear by Baal, then they shall be established in the midst of My people. But if they do not obey, I will utterly pluck up and destroy that nation,” says the LORD. (Jeremiah 12:14-17, NKJV; emphasis added)

This plan represents the compassionate peaceful political solution to the potential regional problem of the return of the Jew into the Holy Land. Jeremiah suggests that his God would cause the corridors to open for the Arabs to leave the land destined to become the Jewish state and return to the lands of their ancestry. In addition, He would resettle the Jews out of the surrounding Arab nations, and bring them back into their homeland Israel. As each ethnic group migrated they would vacate homes and jobs enabling the returning peoples economic opportunities, and in some cases already existing communities to inhabit. These Jeremiah passages represent the ancient blueprints, divinely designed to insure the successful return of the Jewish people back to the land of their heritage.

God’s Roadmap Plan to Peace took into consideration that there would be “evil neighbors” homesteading the holy land. He foreknew they would need be relocated to make way for the return of the Jewish people. The Middle East conflict that confounds the politicians today has not caught God off guard. Provisions were included in Jeremiah’s prophecy for their future as well. They would be “plucked out” and resettled in the lands of their ancestry. A fertile future awaited them, if they entreated their affections to Jehovah, Jeremiah’s God.

In apparent fulfillment of the Jeremiah 12:14-17 prophecy, there are millions of Arabs “plucked out” from the territory formerly recognized as Palestine. For approximately sixty years, these uprooted Arabs have been unable to relocate into an alternative homeland. These Arabs from Palestine have been reduced to a refugee status because their Arab relatives have shut their national doors on them. These Palestinian Refugees remain strategically deployed by their Arab partners close to the borders of Israel.

These Arab nations have cleverly managed to shift the burden of responsibility for the relocation of these refugees, into the lap of the International community, the same community that legislated the re-establishment of the nation Israel as the Jewish State, implemented in 1948. UNRWA the United Nations Relief and Works Agency, was established May 1, 1950 to find a solution to this refugee problem.

By not taking responsibility to absorb the Palestinian Refugees into their societies, these Arab nations appear to be in substantial breach of God’s Roadmap Plan to Peace. Even still God stated through Jeremiah that if these Arabs would “swear by My name,” that they would “be established in the midst of My [Jewish] people.” However, on the flip side, “if they do not obey,” God “will utterly pluck up and destroy that nation.”

The fact that Jeremiah described the affected Arabs as “evil neighbors”, who would be “plucked out”, indicates that in the foreknowledge of God, the return of the Jew into the holy land, would not be a smooth process. Otherwise he would have used substitute terms like, “good neighbors”, and “escorted out”. Hence the world now has a Middle East conflict on its hands.

At this point it should be duly noted that there is no Jewish Refugee crisis, since they have been welcomed and adequately assimilated into Israeli society. The absence of any such crises, is one less burden upon the United Nations, and also evidences that the Jewish people are operating in compliance with God’s Roadmap Plan.

More prophecy exists regarding this subject matter, and is exhaustively detailed in my book called “ISRALESTINE”; the Ancient Blueprints of the Middle East, due out July 1, 2008, from Anomalos Publishing. If you would like to know how Jeremiah’s God intends to resolve the Arab – Israeli stalemate, you are encouraged to pick up your copy of ISRALESTINE, and discover the ancient prophecies intended for your present understanding.