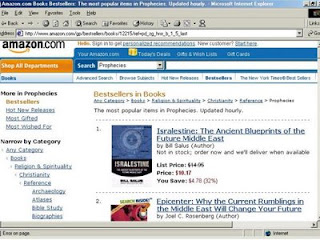 ISRALESTINE The Ancient Blueprints of the Future Middle East

THE BIG FINALE
“Radio at its finest and final hour”

The author that has eschatology experts rethinking their entire end time model, debut’s his new best selling book Isralestine, The Ancient Blueprints of the Future Middle East. This one of a kind interview Bruce Collins conducts with Bill Salus will have you at the edge of your seat throughout, as the missing Middle East prophecy puzzle piece is thoroughly explored.

Guaranteed; prophetic information never before disclosed is unveiled. Discover in depth Psalm 83, the coming Arab – Israeli war, which could be the next Middle East news headline. Find out how the scholars have placed the cart before the horse regarding the Russian – Iranian led Ezekiel 38 & 39 invasion of Israel. “Psalm 83, and then the infamous Ezekiel invasion”, declares Salus in this cutting edge radio show interview.

Never mind Russia’s strong ties with Iran, and recent invasion of Georgia, “Israel is not presently dwelling securely without walls as an end time’s peaceful people”, resounds Salus. “Therefore the stage is not set for the Russian – Iranian led nuclear equipped invasion”. Futhermore, Bill points out why the Psalm 83 Arab nations are not listed in the Ezekiel invasion.