PROPHECY IN THE NEWS ISRALESTINE REVIEW

ISRALESTINE; The Ancient Blueprints of the Future Middle East 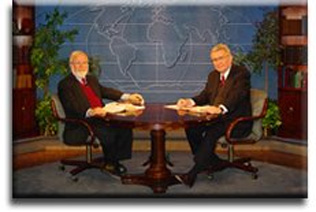 There’s a war on the horizon. The student of prophecy can feel it in his bones as the prophetic warnings of the Old Testament prophets come into view. Just recently, Russian tanks swept across the landscape of democratic Georgia, destroying everything in their path as the Georgian people begged for mercy. Russia has also claimed ownership of the North Pole and the rich mineral rights that go along with it. Oil is the new gold. And the Cold War is over, right?

Russian strongman, Vladimir Putin, has completed his term as Russian President, but somehow, he’s kept his hands on the Russian military machine. The Russian Bear is on the move again and its pockets are lined with increasing oil revenues, likely generated from America’s attempt to fight worldwide terrorism.

On another war front, Iranian madman, Mahmoud Ahmadinejad, continues to threaten Israel with annihilation, as his country moves down the perilous path to nuclear capability. Ahmadinejad seems to have a death wish, purposely rattling his saber in hopes of creating and apocalyptic scenario that would leave Iran in the good graces of the Mahdi, the Muslim Messiah. Russia and Iran are perfect partners for the last days.

The stage is set, the players are in place and soon, Russia, along with the jittery, Iranian posse, will attack little Israel and get the surprise of a lifetime! Yes, it’s the Battle of Gog and Magog that many of us think could be right around the next bend in the road.

But according to Bill Salus, author of Isralestine: The Ancient Blueprints of the Future Middle East, you need to read the Old Testament again. Salus says that Obadiah, Zephaniah, and Zechariah had some major things to say about today’s warmongering in the Middle East. Suffice it to say that the ancient hatred between Israel and its biblical neighbors has been fast forwarded to the 21st century and a new battle of long time enemies may be about to begin.

According to the author, there is a big war on the horizon, but not the one you expect. Salus takes us to Psalm 83 and introduces us to what he believes is the regional war that must take place before Russia and Iran come down against Israel:

“They have said, Come, and let us cut them off from being a nation; that the name of Israel be no more in remembrance. For they have consulted together with one consent; they are confederate against thee” (Psalm 83:4-5)

J. R. and Gary have been talking about Psalm 83 for many years, along with the destruction of Damascus in Isaiah 17, but someone has finally penned a book on this complicated subject! I don’t think you’ll find another book out there on the preliminary war to the Battle of Gog and Magog. But be forewarned. This book is not without controversy as Salus introduces some unusual ideas on this war, the future of Islam, the future of Israel, and the Palestinian people.

Salus takes us to Ezekiel 38 and points out that Israel’s surrounding neighbors are nowhere to be found in the Battle of Gog and Magog. Where are their lifetime archenemies? Syria? Jordan? Egypt? Saudi Arabia? Lebanon? The Palestinians? How could Russia and Iran fight a war against Israel and keep these perpetual antagonists away? According to Bill Salus, it’s simple. At the time Gog and Magog takes place, Israel has already conquered her ancient enemies in a dramatic and convincing military victory, greatly expanding her borders while plundering the wealth of these Arab nations. This is the event that draws Russia and Iran down from the north as they see Israel taking control of the wealth of the Middle East.

Isralestine offers a fantastic summation on the miraculous restoration of the nation of Israel. He builds the foundation of the book around the reliability of the Abrahamic Covenant. Unfortunately, according to the author, 85% of mainline Christian churches are now embracing Replacement Theology, teaching that the church has replaced Israel in God’s future plans. Once you read this book, you won’t be able to even consider that flawed perspective.

The roots of this ancient family hatred can be traced all the way back to the Garden of Eden, but Salus does a great job in showing many Old Testament events in a new light. The fractured relationship between Isaac and Ishmael; the nasty relationship between Sarah and Hagar, and the peculiar relationship between Jacob and Esau will all take on new meaning for you after Salus opens up your eyes to what might have been happening in their world during several well-chronicled, life changing events.

He’ll show you why God chose Israel to be the “apple of His eye,” and why he chose to punish them and scatter them to the four corners of the earth. He’ll explain the Holocaust and show you why the Antichrist has a sequel planned for the Jewish people and why they will be caught off guard. Best of all he’ll show you why God has chosen to bring them back to the Holy Land and restore them to prominence.

While many Christians are looking for a peace treaty between Israel and the Palestinians, Salus is looking for war. Many of God’s ancient prophecies concerning the destruction of Israel’s enemies have yet to be fulfilled, but that could change quickly. God said, “I will bless them that bless thee and curse him that curseth thee.” The enemies of Israel need to be on high alert because our covenant-honoring God always keeps His promises.