For I am not ashamed of the gospel of Christ, for it is the power of God to salvation for everyone who believes, for the Jew first and also for the Greek.[i]

Since the formation of Israel on May 14, 1948, Christians worldwide have stepped up efforts aimed at getting the gospel message out to the Jewish people. Many of these “good news” recipients are hearing for the first time fundamental facts such as, Jesus was a Jew, and, the current outpouring of Christian support for the nation Israel is Biblically based. Sixty years of sincere evangelism has Jews flocking to Jesus in record numbers. Yet scores more remain undecided, or uninformed, about the messianic claims of Christ.

Among this latter grouping, are 144,000 Jews destined for spiritual greatness. They will witness the Christian Church vanish from the earth in a twinkling of an eye,[ii] which is the likely event prompting them to realize that Jesus Christ was, is, and will always be the Messiah! Left behind,[iii] these individuals will commence to administer the gospel of Christ in a perilous period of time.

Revelation 7:5-8 identifies these future evangelists by their ancient tribal origins. From each of the following twelve tribes come 12,000 members who commit themselves toward godly servitude: Judah, Reuben, Gad, Asher, Naphtali, Manasseh, Simeon, Levi, Issachar, Zebulun, Joseph, and Benjamin. According to Revelation 7:9-10, these 144,000 witnesses turn out to be instrumental in escorting many end time souls to salvation.

Curiously, these twelve tribal patriarchs are not listed in their chronological birth order. Since the Bible normally identifies genealogies chronologically, this contrast is attention getting. Judah, listed first, was actually the fourth son of Jacob and his wife Leah, and Manasseh, Joseph’s son, is listed before his father. Similarly the other names are not listed in any apparent order, or are they? Conspicuous scriptural abnormalities like this compel a deeper analysis. A standard starting point of exploration is to discern the meaning of the names to see if they are message-formatted. This method finds application in the case of the 144,000 witnesses. 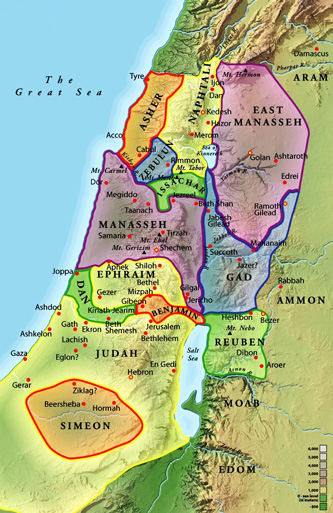 The Meaning of the Names: Judah- Praise God; Reuben- behold a son; Gad- good fortune; Asher- happiness; Naphtali- my wrestling or struggle; Manasseh- God has caused me to forget; Simeon-hearing; Levi-joining or grafting in; Issachar- God hath given me my hire, or has reinstated me; Zebulun- elevated or elevated position; Joseph- adding or increasing; Benjamin- son of the right hand.[iv]

The Message of the Names: Praise God! Behold a Son of good fortune and happiness. My struggle, God has caused me to forget. Hearing of our grafting in, God has reinstated me into an elevated position, increased by the Son of the right hand.

The Mission Statement: Inherent in these oddly ordered names, appears to be the ministerial message of the 144,000 witnesses. Their “Mission Statement” should read as follows: Praise God for the gospel of Christ, a Son of good fortune and happiness. My struggle with sin and the Mosaic Law, God has caused me to forget. Hearing of the mystery of our grafting in with the Gentiles,[v] God has reinstated me into an elevated position of ministry once again, and is increasing those being saved through Christ, the Son of the right hand.[vi]

These post-rapture Jews will be among the “Firstfruits”[vii] of the restored “My people Israel” period. This is a future point in time, whereby the Jewish people regain their former “Client Nation” status. For over 2000 years, in fulfillment of Hosea 1:9, the Jews existed in a “not My people’ condition. The rebirth of the nation Israel in 1948 set the stage for their entitlement reclassification process. They are soon to be reinstated as “My people Israel”.[viii] Forthcoming events that occur during this period of time are detailed in my book, ISRALESTINE, The Ancient Blueprints of the Future Middle East, available available on our products page.

Briefly stated, with the sudden disappearance of the Christian Church, God’s people Israel, formerly recognized as the “Chosen People”, take center stage once again. Performing in the main arena at the time will be the 144,000 Jewish evangelists. Their faith in Christ, understanding of the Bible, and Christian artifacts like books, commentaries, tapes, videos, songs, and other assorted teachings, will undoubtedly escort them through their end times gospel campaign.

Corresponding with the mysterious exit of Israel’s greatest fan club, the Evangelical Church, comes the daunting realization that the Jewish State is left behind to fend for itself. If not fulfilled beforehand, the Arabs of Psalm 83, and then the Russian – Iranian led coalition of Ezekiel 38 and 39, will each advance against Israel for their piece of the chosen pie.

Against this amazing backdrop, these 144,000 witnesses accomplish one of the greatest worldwide revivals in history. At the cost of a martyr’s death, many will come to accept Christ as their Savior. Therefore, the good news today is that the gospel continues on tomorrow, through the faithful efforts of the 144,000 future Jews for Jesus.