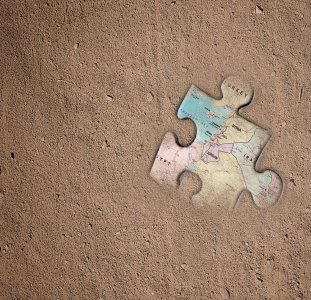 Astonishingly the final piece of the end-times puzzle was uncovered in, of all places, Ireland on July 26, 2006. An engineer digging up Irish bog-land to create commercial potting soil noticed just beyond the bucket of his bulldozer, a well-preserved ancient parchment. It was Psalm 83, opened up in place and in plain view. Perhaps it is no coincidence that this Psalm that is filled with prophetic content has been dug up, dusted off, and rendered newsworthy in these latter days.

By placing this 83rd piece into proper place, predicted events come into appropriate alignment. This exciting discovery now completes the last days puzzle, enabling the prophecy buffs to confidently forecast the coming Arab-Israeli War, followed by the Russian – Iranian led invasion of Israel described in Ezekiel 38 and 39, and lastly the dreaded “Tribulation Period”. Located in the Old Testament, Psalm 83 alludes to an Arab confederacy that seeks to destroy the modern day Jewish State of Israel. The Psalmist lists these ancient enemies of Israel by their ancestral names: “The tents of Edom and the Ishmaelites; Moab, and the Hagarenes; Gebal, and Ammon, and Amalek; Philistia with the inhabitants of Tyre: Assyria also is joined with them.” (Psa. 83:6-8, ASV; emphasis added)

Back then labels like Palestinians, Jordanians, Hamas, Hezbollah, Syrians, and Saudi’s, didn’t exist, so it is up to this present revelation generation to locate the whereabouts of these ethnicities today. This map taken out of my new book Isralestine; The Ancient Blueprints of the Future Middle East, identifies these Islamic nations alongside their historical counterparts.

These nations have the tiny Jewish State completely boxed in on every side. Although a temporary and fragile peace exists between, Israel, Egypt and Jordan, the preponderance of these Arabs, don’t recognize Israel’s right to even exist.

Here is how the 83rd piece completes the prophecy puzzle. These predominately Arab groupings, whose ancestors have harbored an ancient hatred of the Jewish people from time immemorial, are going to attempt one final concerted effort to destroy the nation Israel.

The Psalmist puts it this way: “They [the Arab confederates] devise crafty schemes against your [Jehovah] people [the Jews], laying plans against your precious ones. “Come,” they say, “let us wipe out [modern day] Israel as a nation. We will destroy the very memory of its existence.” This was their unanimous decision. They signed a treaty as allies against you” (Psa. 83:3-5, NLT)

This self-explanatory passage informs us that the Middle East conflict of today will escalate into a massive war. This will make the historical Arab – Israeli wars of 1948, 1956, 1967, and 1973, look like cross-town sporting rivalries comparatively. This war will leave Israel no choice but to decimate all of its evil Arab neighbors, and in the process put the world on notice that is has emerged into the “exceedingly great army” foretold to come in Ezekiel 37:10.

Furthermore, the Jewish State will stretch out sovereignty over some of the conquered Arab territories. They will do so in an effort to claim sections of the land their God Jehovah promised to their patriarch Abraham in Genesis 15:18. This potentially puts portions of Egypt on through to Iraq into their Real Estate portfolio. Part and parcel with increased territory comes Jewish possession of Arab resources and the associated spoils of war. Israel will become a much wealthier nation as a result of their conquest, and will begin to dwell securely in what I refer to as Isralestine, and Daniel 11:41 classifies as the “Glorious Land”.

In this post war condition, the Jewish State will appropriately resemble the nation of Israel described in the prophecy of Ezekiel 38:8-13. They will be a peaceful people gathered back into their ancient homeland of Israel, in the latter days. They will dwell prosperously, and securely. This is prerequisite for the stage setting of the Russian – Iranian led coalition described in Ezekiel 38 and 39 that comes to destroy Israel and take over Isralestine.

Pundits have often wondered why the Palestinians and their Arab cohorts, who are the most observable opponents of Israel today, are not enlisted in the Russian – Iranian coalition. The Psalm 83 puzzle piece evidences why; these populations are fragmented at that time. They are reduced to prisoners of war and refugees, and as such, of no military utility to the Russians and Iranians.

Sometime after Israel takes out their Arab neighbors, and becomes one of the wealthiest nations in the world, the cry will go out across the Promised Land, “The Russians are coming, the Russians are coming”! Then the world will witness the God of the Jews execute the destruction of the Russian – Iranian led invasion of Isralestine. These events are described in Ezekiel 39:1-8, and are entirely orchestrated by God, without the assistance of the Israeli army. Thus the Israeli Defense force of today is emerging for the primary purpose of combating the Psalm 83 Arab confederacy.

Completing the prophecy puzzle, the Antichrist enters into the Middle East Theater, in an attempt to neutralize the empowered Jewish State, which at the time will be basking in the glory of two significant victories. The Jews will have defeated the Psalm 83 Arabs, and their God Jehovah will have destroyed the Russian – Iranian led coalition. In essence the struggling Jewish State of Israel today will be a super nation tomorrow!

For more information on all of these prophecies, you are encouraged to pick up your copy of my new e-book – ISRALESTINE,
available on our products page.