But an unexpected war is imminent, according to best-selling new biblical analysis

WASHINGTON – Even though Russia has advanced south into Georgia, a best-selling new Bible prophecy book says suggestions this signals an imminent march into the Middle East are mistaken.

Instead, says Bill Salus, author of “Isralestine,” the world is about to be surprised by a different kind of devastating regional war involving Israel and its Arab neighbors. “Isralestine: The Ancient Blueprints of the Future Middle East,” currently rising to the top of the prophecy charts, says scholars have missed a significant piece of what the Bible reveals about the future of the region. And it has many of them reconsidering their prophetic model for the near future. (Read WND article)

With Russia’s invasion of Georgia and threats to other neighbors kindling renewed Cold War fears, many Christians are asking themselves the following question: Is this a signal the long-awaited Magog coalition is preparing to move into the Middle East?

As a student of prophecy and author of the new book, “Isralestine,” I believe I can say without equivocation the time for that familiar Ezekiel 38 and 39 invasion is not imminent. The Russians aren’t coming, not yet anyways. The time is not at hand. There is another, long overlooked prophetic development that must occur first.”

Rising above the Ezekiel 38 newspaper exegesis for a moment, we must ask ourselves if Israel today, adequately meets the description of prerequisite requirements defined in Ezekiel 38:8-13. In a previous article, Psalm 83 or Ezekiel 38, “Which is the Next Middle East News Headline”, I ask the following: Is Israel:

The article goes on to exclaim a resounding NO to all of the above! So then if the stage is not set for the Ezekiel invasion, what makes Israel camera ready for this Gog-liath event?

When are the Russians coming?

Israel has to burst out of its territorial seams and become the next Middle East Super- State. Destined to someday possess land from the Nile to the Euphrates Rivers, Israel has been cooped up like a canary in a cage for 60 years too long. While Israel’s Arab enemies seek to blow up the birdcage, the Bible has flipped open to its final pages.

Not one, but two powerfully prophetic events are about to unfold in the Middle East, and in the end, an entirely new Atlas of the region will need to be redrawn. In Isralestine, I point out that in fulfillment of Ezekiel 37:10 the Israeli Defense Forces are about to become an “exceedingly great army”. They will achieve this title after they face off with, and decisively defeat the Psalm 83 Arab forces.

Freed from further Arab terror torment the nation will bring down its walls, dwell securely, and resemble the “latter years” nation described in Ezekiel 38:8-13. World Jews will make massive Aliyah into Israel, and the nation will expand its borders and exploit the resources of their defeated Arab foes.

Then Russia and Iran will look upon Israel as if it was a ripe carrot dangling upon a reachable string, and they will covet a piece of the plunder. The Russians and Iranians will lick their chops, assemble their 9 member coalition, and invade the future regionally superior Jewish State.

The accolades of the exceedingly great I.D.F. will promptly become yester-years news, as they will not match up, with what commences to march against them. As the Ezekiel story goes, their God divinely saves the day. The Russian – Iranian led nuclear equipped consortia will drop dead in their Middle East tracks, and world headlines will read like Old Testament fire and brimstone passages. 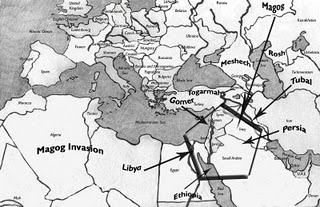 At the end of the bloody rainbow, will sit Israel’s pot of gold. Seven years of nuclear fuel, more land for the taking, and prominent International stature. Their ancient King Solomon in all of his splendor, riches, and glory will but pale in comparison.

So you see the tiny nation of Israel, that today can’t even call Jerusalem its capitol, is about to be the centerpiece of current world events. Humanity is called to caution and set its sights on the ancient story about to unfold. Israel of today is set to explode into the next Middle East Super-State of tomorrow.