PSALM 83 – Has It Found Final Fulfillment?

Currently many prophecy buffs are discussing the Psalm 83 petition formatted prophecy written by the seer Asaph approximately 3000 years ago. This prophecy enlists a ten-member population whose goal is nothing short of wiping Israel off of the map. These ancient populations are seen superimposed upon their modern day equivalents on the map below, and their confederate mandate is:

“They have said, “Come, and let us cut them off from being a nation, That the name of Israel may be remembered no more.” (Psalm 83:4, NKJV)

My book Isralestine the Ancient Blueprints of the Future Middle East, has caused many eschatologists to rethink their end times model. However, not all the experts agree with my end time equation that Psalm 83 precedes Ezekiel 38 & 39. There are those who still sweep the prophecy into the catchall closet of the 7-year Tribulation, or simply deposit the event into the file 13 trash can bin of historical fulfillment.

Why Psalm 83 doesn’t belong in the 7-year Trib period is a subject for a future article; however this piece is intended to pull the prophecy out of the annals of historical fulfillment and place it back into the pending event category. Furthermore this article is not intended to serve as a substitute for reading Isralestine in its entirety, which covers all the above and volumes more. 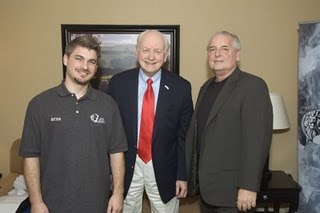 Recently I was invited by Nathan Jones, (pictured far left) the up and coming eschatologist extraordinaire and Webmaster for Dr. David Reagan’s (pictured in middle) Lamb and Lion Ministries, to participate in an ongoing blog. The argument was raised by some gentleman identified as Don that 2 Chronicles 20:1-37 likely describes the final fulfillment of the Psalm 83 prophecy. You can read my blog comments below and review some of the other assorted blogs made by others at the following link: http://www.lamblion.us/2009/01/gaza-conflict.html

“Nathan and Don- 2 Chronicles is not likely the episode Asaph describes in Psalm 83. The 2 Chronicles account primarily describes only 3, possibly 4, of the 10 member populations enlisted in the prophecy of Psalm 83. These are the Psalm 83:6-8 confederates: The tents of Edom and the Ishmaelites; Moab and the Hagrites (Hagarenes); Gebal, Ammon, and Amalek; Philistia with the inhabitants of Tyre; Assyria also has joined with them; They have helped the children of Lot.
Now compare all of the above to 2 Chronicles 20:1-37. 2 Chron. 20:1 NKJV – It happened after this that the people of Moab with the people of Ammon, and others with them besides the Ammonites, came to battle against Jehoshaphat. (Following Masoretic Text and Vulgate; Septuagint reads Meunites see 2 Chronicles 26:7
2 Chronicles 20:1 ASV And it came to pass after this, that the children of Moab, and the children of Ammon, and with them some of the Ammonites, came against Jehoshaphat to battle.Verse 1 enlists Moab and Ammon, and possibly the Meunites.
The NKJV suggests that “others” were involved besides them, but that likely refers to the Meunites a much smaller grouping than those of Psalm 83:6-8. The Meunites, if that is who verse one references, were an Arab tribe that dwelt about 12 miles Southeast of Petra, which still puts them in modern day Southern Jordan.
I cited the ASV in addition to the NKJV to illustrate that it only identifies Ammon, and Moab. Verse 2 references Syria (Some Masoretic Text, Septuagint, and Vulgate; some Hebrew manuscripts and Old Latin read Edom.) Edom or Syria, or both, this still is only a portion of the 10 populations of Psalm. 83. Verse 10, 22-23 of 2 Chronicles 20 lists Moab, Ammon, and Mt. Seir. Mt. Seir identifies primarily the people of Edom.
Thus the populations referenced primarily would be modern day Jordan, with a slight possibility of Syria having been involved. Moab is today Central Jordan, Edom is Southern Jordan, and Ammon is Northern Jordan. Petra, Mt. Seir, and the Meunites, would also be clustered in and around Southern Jordan today.
Due to the fact that less than half of the required ten Psalm 83 populations are referenced, it is not possible that 2 Chronicles 20 could be considered as the source of Psalm 83 fulfillment. In addition, several scholars like Dr. Arnold Fruchtenbaum, Jack Kelley, Dr. David Reagan, David Dolan and more believe that Psalm 83 has yet to find its final fulfillment.”

There are those who believe that the six-day war of 1967 occasioned the final fulfillment of the prophecy. I have this suggestion presented to me often, and below is a recent email I sent to a friend in response to his concern that this could be the case.

I have recently been informed that you believe Psalm 83 may have found its fulfillment in the six-day war of 1967. Interestingly Dr. David Reagan and I discussed this possibility recently while visiting together at a Calvary Chapel Chino Hills conference hosted by Pastor Jack Hibbs in February 2009. We concurred that the better argument for fulfillment was the 1948 war commonly considered by the Israeli’s as “The War of Independence”, however neither of these truly meets the description in our estimation. There are 10 populations involved in Psalm 83:6-8 and not all of them were involved in 1967 and more than all of them were involved in 1948.

Additionally it is important to note that the “tents of Edom” are the first population listed in the Psalm 83:6-8 grouping and a careful study demonstrates that the Edomite descendents became tent-dwellers only in the aftermath of the 1948 Arab – Israeli War. 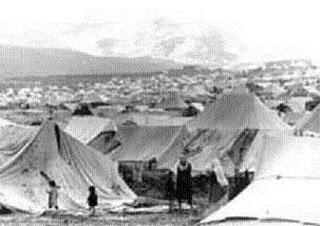 Biblically the “tents of” condition alludes to either refugees or military encampments. In the Edomite instance their refugee condition became a troubling reality in 1949 when the Palestinian Refugee crisis commenced. Up until that time they were known as the Arabs of Palestine, these days they are referred to as refugees. (Above Photo of Baga’a Refugee Camp 1949 UNRWA) 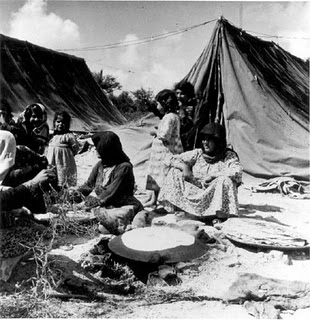 Isralestine devotes an entire chapter to this topic called; “Whodomites” – Who are the Edomites Today. Inside the “Whodomite” chapter the Edomite – Palestinian Refugee connection is clearly made. The chapter traces several historical waves of Edomite migration out from their original homeland into Israel. They generally settled in and around Hebron, which today exists in the modern day West Bank. Ultimately they became known as the Idumeans, which is the Greek word for Edomites. The territory they developed inside of Israel assumed the name Idumea.

It appears that since 1949 up until the present day the Palestinian Refugees, the apparent antagonistic star of the Psalm 83 show, have a descendant Edomite contingency residing within their ranks. (1949 Palestinian Refugee Photo from UNRWA)

However the additional argument against either of these two Arab – Israeli wars being the fulfillment is the fact that Asaph is petitioning God to utterly destroy this confederacy as per Psalm 83:17, an event that has not yet occurred.

He petitions God to fashion their demise in the similar format of the historic examples he lists in Psalm 83:9-11 and the allegorical illustrations of Psalm 83:13-16. The fact that these populations still exist, seek possession of the Promised land in Psalm 83:12, and continue to collectively possess the antagonistic attitude toward Israel of Psalm 83:4, conclusively evidences in my estimation that this prophecy has yet to find fulfillment.”

For article brevity sake, I’ll let the reader do his or her own homework on the participants of the 1948 and 1967 wars and if further questions develop please blog them below this article.

The two arguments listed above are the primary ones forwarded by today’s top scholars who believe that Psalm 83 has already found its fulfillment. Having previously deposited Psalm 83 into the historical fulfillment file 13, these advocates tend to then center their focus upon Ezekiel 38 & 39 as the next Mideast Bible Prophecy set to find fulfillment. I disagree with this thinking and express my opinions further in a previous article: “Psalm 83 or Ezekiel 38, Which is the Next Middle East News Headline?”

We must consider the fact that mere rumblings today between Russia and Iran in the Epicenter of the Middle East, as Joel Rosenberg likes to refer to them, does not constitute, but rather simply suggests, the nearby fulfillment of the Ezekiel 38 & 39 invasion. Oddly many military experts are predicting just the opposite, that Israel may be forced to invade Iran in order to forestall their nuclear aspirations. This could temporarily sideline Iran and render them of little immediate utility to Russia, and may be one of the reasons ancient Persia is not listed among the Psalm 83 confederates.

Anyway you prophe-size it up, some big world changing Middle East event is certainly about to happen, just like the Bible predicted it would. The fact that the Psalm 83 confederates live on today and embrace the ancient hatred of Israel signals the high likelihood that Psalm 83 is the next Mideast prophecy to find fulfillment.
Tweet
« Previous - Next »