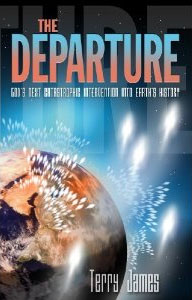 In part one of this two part interview Bill asks Terry about his recently released book called The Departure God’s Next Catastrophic Intervention Into Earth’s History. Several notable end times’ experts like Chuck Missler and Tom Horn collaborated with Terry in his effort to inform humanity of today’s most pressing prophetic issues. Listen to Terry James and Bill Salus – In Part 1 of the Interview

Will the Antichrist have Nephilim origins?

In part 2 of this two part important interview Terry cautions against Christian complacency in these last days. He reminds the listeners that the stage is set for almost every end time’s bible prophecy to occur. The Rapture could happen in any twinkling of the eye moment. Millions of Christians vanishing instantly will create worldwide confusion and chaos. Terry believes even scores of unborn children could be caught up to heaven directly from inside the wombs of their mothers.

The departure of millions of Christians swings the door wide open for the arrival of the Antichrist. In part two of this interview, Terry James discusses his potential Nephilim origins. Listen to Terry James and Bill Salus – In Part 2 of the Interview.