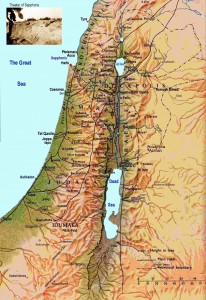 Many Christians teach that Jesus Christ soon returns to earth in a Second Coming. They believe that upon his return he establishes a 1000 year messianic kingdom in a restored Garden of Eden type world. Furthermore, they predict Israel at that time will increase to about 10 times its present size in fulfillment of the Genesis 15:18 prophecy.

This Genesis promise grants to Abraham, the patriarchal father of the Jewish people, the enormous landmass existing today between the Nile River in Egypt and the Euphrates River in Iraq and Syria. Since 90% of this land is presently possessed by the Arabs many Christians fail to consider the possibility that Israel may annex some of this territory even prior to the return of Christ.

Similarly, these days humanity generally views Mideast events through this limited lens of a lesser Israel. The world’s geopolitical focus is fixated upon this struggling-to-survive tiny Jewish State. The international community continues to beseech Israel to trade land for peace with the Palestinians. As such, they call for the implementation of a 2-State solution. Such a solution intends to keep Israel boxed into its present lesser Israel size and status.

However, this week on Prophecy Update Radio host Bill Salus reminds us that God has plans for a Greater Israel and a 1-State Solution. In this two part radio series Salus suggests, that according to the prophecies related to Psalm 83, Israel will begin its territorial expansion even before the second advent of Jesus Christ.

Listen now Israel in Prophecy to Part one of this two part series. (recorded 9/2009).