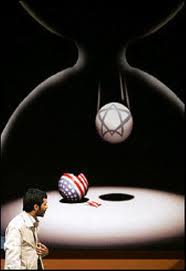 PART ONE – Looking Through the Rear View Mirror At 2010

As the door shuts on 2010, American led Middle East peace efforts have officially unraveled. The Obama administration has backed away for now from pressuring Israel into extending its moratorium on settlement building in the West Bank and East Jerusalem. In the absence of peace we are reminded Israel, which equipped its citizens earlier this year with gas masks, remains war ready as 2011 approaches. (Read Part One)

Israel is prepared to strategically strike Iran’s nuclear sites. This past September I spoke with retired Israeli Defense Forces General Shimon Erem who confirmed Saudi Arabia opened up a thin strip of air for Israel to attack Iran. It’s interesting that no Jewish Synagogue can be constructed in Saudi Arabia, but Israeli war planes are now allowed to fly overhead as long as they are on route to attack Iran. (Read Part Two)