The Alien Gospel of Signs and Lying Wonders 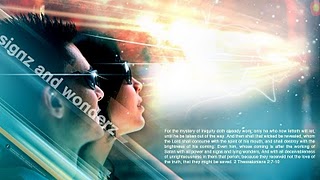 This week on Prophecy Update Radio host Bill Salus interviews bible prophecy expert L.A. Marzulli. Marzulli challenges the church to WAKE UP to the burgeoning UFO phenomena in bible prophecy. Alien implants are being inserted into abductees. New Age psychics are channeling deceptive messages about the extra-terrestrial origins of man (panspermia). Humanity is primed for strong delusion manifested in the realization that mankind is not alone in this universe.

Marzulli suggests an alien gospel could be “THE LIE” described in 2 Thessalonians 2:9-12

The coming of the lawless one [antichrist] is according to the working of Satan, with all power, signs, and lying wonders, and with all unrighteous deception among those who perish, because they did not receive the love of the truth [gospel of Jesus Christ], that they might be saved. And for this reason God will send them strong delusion [alien gospel], that they should believe the lie, that they all may be condemned who did not believe the truth but had pleasure in unrighteousness.

What did the bible have to say about the supernatural origins of the Antichrist and what great deception(s) facilitates his rapid rise to world power? These and many more topics are discussed in this impacting interview. There is plenty of food for thought in this two part interview and it is saturated with Marz-salus sauce throughout.

LISTEN NOW to part one.