The Twin Prophecies of Jacob and Esau 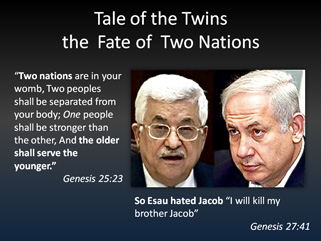 This article introduces two important Prophecies regarding the twin brothers of the Bible, Jacob and Esau. Jacob was renamed Israel in Genesis 32:28 and he fathered Israeli descendants. Esau, Jacobs older twin brother, fathered the Edomites according to Genesis 36:1,9. Invaluable insights into the roots of the present Palestinian – Israeli conflict can be gleaned from understanding these twin prophecies.

Presently the international community desperately seeks to join the Israelis and Palestinians at the hip in a peaceful “Two State Solution”: a Jewish State, and a Palestinian State. Did you know that there once was a time when the ancestors of these two people groups, the Israelis and the Edomites, successfully operated in a “Two State Solution” of sorts? However there were two prophecies written in ancient times that foretold of both Israel’s and Edom’s national decline, and at the time of the fulfillment of these two prophecies, their operational “Two State Solution” disintegrated.

Now when she had weaned Lo-Ruhamah, she conceived and bore a son. Then God said: “Call his name Lo-Ammi, For you are not My people, And I will not be your God. (Hosea 1:8-9; NKJV)

Jeremiah’s and Obadiah’s prophecies regarding Edom

I have heard tidings from the LORD, and a messenger has been sent among the nations: “Gather yourselves together and come against her, and rise up for battle!” For behold, I will make you (Edom) small among the nations, despised among men. (Jeremiah 49:14-15; RSV)

The vision of Obadiah. Thus says the Lord GOD concerning Edom: We have heard tidings from the LORD, and a messenger has been sent among the nations: “Rise up! let us rise against her for battle!” Behold, I will make you small among the nations, you shall be utterly despised. (Obadiah 1:1-2; RSV)

In a twist of fate, twin brothers Jacob and Esau would have their descendants share in a similar divine disciplinary action. The two historically infamous peoples, the Jews and the Edomites, would experience their national decline in the same place and at the same time. Both ethnic groups were conquered by the Roman Empire on or around 70 A.D. in what turns out to be the final fulfillment of these two important Bible prophecies.

Back then these two populations co-existed semi-peacefully in a “Two State Solution” of their own. The Jews inhabited Judea, and Samaria, which comprised the Northern and Southern kingdoms of Israel, and the Edomites occupied “Idumea”, and were known as the Idumeans, which was the Greek word for Edomites. Idumea / Edom encompassed land in Southern Israel, Northeastern Sinai, and Southwestern Jordan. The Jewish capitol was Jerusalem, and the central Idumean city was Hebron approximately 19 miles to the south. At the time the Idumeans and Jews both practiced Judaism, evidencing a common bond between them. 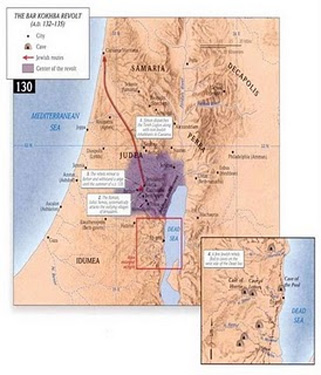 When the Romans conquered Jerusalem and destroyed the second Jewish temple in 70 A.D., they also fought against the Idumeans. According to the historian Josephus, many Idumeans were either killed, or sold into slavery, and ultimately about 40,000 remaining Idumeans were freed by Caeser to go wherever they desired enabling them to keep their ethnicity in tact. (1) Indeed by 70 A.D. Edom / Idumea had undeniably been made “small among the nations”.

The attached map represents the layout of the region around 135 A.D. at the time of the Bar Kokhba Jewish revolt. This map depicts Idumea still in existence as a recognized territory. As such one might safely presume that Idumeans still resided in the subject land on or around 135 A.D. (2) This suggests that at least some of these 40,000 freed Idumeans continued to reside, and repopulate in the territory of Idumea.

To further understand the declassification of the Israelites to “not My people” it is important to read the “My people Israel” chapter in my book Isralestine; The Ancient Blueprints of the Future Middle East. For now it is important to recognize that the declassification of the Jews into “not My people” began at the rejection by the Jewish leadership of Jesus Christ, and found its final fulfillment in the destruction of Jerusalem and the second Jewish temple in 70 A.D. at the defeat by the Romans. Lastly the assumption of the title “not My people” was not prophesied to be a permanent condition, and ultimately the Jews would be reclassified as “My people Israel”, and furthermore “sons of the living God”. (3)

Although Edom was made small among the nations in 70 A.D, Edom continued on a gradual decline. Shortly thereafter, Edom seemingly disintegrated as an ethnic group off the pages of further history. If it were not for the end times prophecies contained in Psalm 83, Ezekiel 25:14 and elsewhere regarding the restored Edomite element, there would be no further cause to remember them. They would be for all intents and purposes extinguished, however the Bible suggests they have merely been “made small among the nations”, and will resurface in that reduced national condition in a final confederate effort, described in Psalm 83, aimed at the destruction of the nation Israel.

Herein lies the problem; the Middle East conflict is the derivative of these two former nations attempting to reclaim the land of Israel-Palaestinia. This may seem an over-simplification of the matter; however it is at the root of the conflict. Both formerly notorious nations who experienced their decline at the same-time and in the same-place, are attempting to pick up where they left off in 70 A.D. They are seeking to reestablish themselves now, centuries later, at the same-time and in the same-place.

When Israel became a nation again in 1948, the Palestinians for all intents and purposes became a people. They became the refugees of Palestine as a result of the 1948 Arab-Israeli War. The surrounding Arab nations protested the reestablishment of the nation Israel and confederated in a war effort against the returning Jewish people. They instructed the Arabs residing within Israel at the time, to vacate temporarily until the Jewish nation was destroyed, at which time these departing Arabs could return into the land.

Amongst the Arabs who left Israel at the time were some of those who had descended from Esau, i.e. the Edomites. History reports that the Jewish people were victorious, and these Edomites became numbered among the refugees of Palestine. Hence at the time they became refugees residing in tents. The Edomites were for all intents and purposes at the time the “tents of Palestine”, or as they are called today, the Palestinian people. 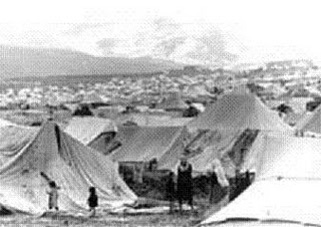 The present plight of the Palestinians is, in large part, the result of the failed Arab war against Israel and therefore primarily the responsibility of the surrounding Arab nations. These Arab nations have done little to absorb and assimilate them into their lands, but have done much to use them as pawns against the developing nation of Israel. Hence we see Israel aspiring to become “My people Israel” again, which is prophesied to successfully occur, and Edom wanting to become greater than the tents of Palestine, which will likely never occur!

Edom will never be great among the nations, as they were permanently “made small among the nations” and that is the best condition they will ever experience. In fact, because of their present attempt to curse the developing nation of Israel, the Edomites will be extinguished as a people according to Obadiah 1:18. In other words the Palestinians of today will likely never nationally ascend much beyond a refugee condition. Listen to what the Psalmist labeled them as in the coming Arab war against the Jews, which is still to find its final fulfillment.

1 – Do not keep silent, O God! Do not hold Your peace, And do not be still, O God!
2 – For behold, Your enemies make a tumult; And those who hate You have lifted up their head.
3 – They have taken crafty counsel against Your people, And consulted together against Your sheltered ones.
4 – They have said, “Come, and let us cut them off from being a nation, That the name of Israel may be remembered no more.”
5 – For they have consulted together with one consent; They form a confederacy against You:
6 – The tents of Edom (Palestinian Refugees) and the Ishmaelites; Moab and the Hagrites;
7 – Gebal, Ammon, and Amalek; Philistia with the inhabitants of Tyre;
8 – Assyria also has joined with them; They have helped the children of Lot.
____________________________