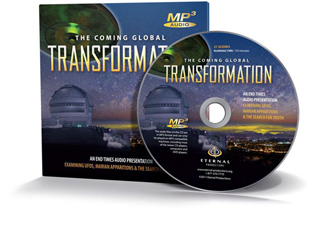 Prophecy Depot is pleased to present our newest end times resource. The audio drama called The Coming Global Transformation which is sweeping through prophetic circles arousing an enormous interest. Bill had the opportunity of consulting with the producers Jim Tetlow and Brad Myers on scene 13, “War in the Middle East,” and scene 14 called “Psalm 83 / Isaiah 17.” In light of the Palestinian U.N. bid for statehood, these two episodes are a must hear if you want to know what could be happening next in the Middle East.

Jim Tetlow and Brad Myers agree with Bill that the Middle East is about to go apocalyptic causing catastrophic world events to spiral out of control. What are these events? How will they affect your lives? And, how soon until they come? The Coming Global Transformation addresses these and many other last days’ concerns.

“I highly recommend this audio drama to all of you. It explores the most important topics on my end time’s radar screen. War in the Middle East, the destruction of Damascus, the Rapture, the coming global order and world religion, and more are acted out scene-by-scene in this one-of-a-kind work.  Jim Tetlow and Brad Myers have connected the prophetic dots like never before.”   Bill Salus 9/27/11

Listen to the four-part radio show about The Coming Global Transformation with Jim Tetlow that aired on Jan Markell’s radio program called Understanding the Times. This program was aired in four-parts on the Prophecy Update Radio show. The links to all four parts are below.

*AUDIO DRAMA IS IN MP3 FORMAT ONLY.