Was Jesus a Jew or Roman Catholic? 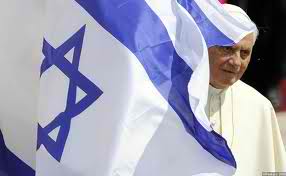 Understanding the Flaws of Catholic Eschatology

Matthew 23:39 declares Jesus won’t return until the Jews proclaim “Baruch haba b’shem ADONAI!” This is Hebrew for “Blessed is He who comes in the name of the LORD!” However, Catholic eschatology teaches Christ returns after humanity converts to Roman Catholicism. This implies Jews, Muslims, Protestants, Hindus, and Buddhists must convert to Catholicism. Is this why the Vatican is presently reaching out to world religions?

This week on Prophecy Update Radio Bill interviews end time’s expert Mike Gendron the founder of Proclaiming the Gospel Ministries. Mike discusses the dangers of Catholic eschatology and the “Four Steps” of Christian apostasy listed below:

The “seeds of apostasy” are already deeply rooted inside Christianity today according to Gendron. He believes the stage is set for the harlot world religious system of Revelation 17 to take over. According to a Mary apparition, “Mary is coming for all her children.”

Listen Now to Part One