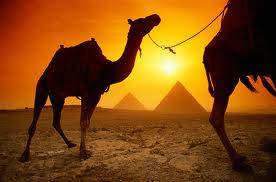 “I (the Lord) will make the land of Egypt desolate in the midst of the countries that are desolate; and among the cities that are laid waste, her cities shall be desolate forty years; and I will scatter the Egyptians among the nations and disperse them throughout the countries.” (Ezekiel 29:12, nkjv)

Ezekiel tells us Egyptians will be scattered among the nations and dispersed throughout the countries for forty years. No historical record or archaeological finding has yet confirmed an Egyptian (40-year) deportation similar to those experienced by Israel’s, (400-year Egyptian bondage, 70-year Babylonian captivity, or 1878-year worldwide diaspora.)

According to the Jewish historian Josephus, Egyptians went into captivity after Nebuchadnezzar of Babylon conquered Egypt, which occurred around 568 B.C. However, it is difficult to confirm the length of the Egyptian deportation. Thus, 40-years of Egyptian deportation might still be a pending prophetic event.

Additionally, Isaiah 19 seems to connect with Ezekiel’s prophecy. (See the three related articles discussing Egypt and Isaiah 19 linked below.) Is Egypt about to experience a desolation brought on by the Arab –Israeli War described in Psalm 83?

What Does the Future Hold For Egypt?

This week on Prophecy Update Radio Derek Gilbert, from “Under the Bunker” blog-talk radio, interviews Bill Salus about the possible prophetic relevance of recent Egyptian protests. This interview was conducted on the eve of President Hosni Mubarak’s departure from office. The Ezekiel 29 and Isaiah 19 prophecies regarding Egypt are discussed.