Is Anywhere Sacred or Safe in America? 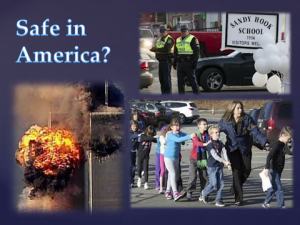 In light of the unspeakable massacre of Sandy Hook Elementary school on December 14, 2102, whereby 27 people were killed, including 20 children, many Americans are asking is anywhere sacred or safe anymore in this country?

Bill Martinez Live interviews Bill Salus about the present spiritual condition of the United States in this gripping 12 minute radio interview from December 21, 2012. Consider the following public, iconic, and military places in America that have been the scenes of senseless violence:

5. MILITARY BASES, Fort Hood in Texas in November of 2009. Major Nidal Hasan, a Muslim military Psychiatrist, went on a rampage killing 13 and wounding 29.

7. MOVIE THEATERS, Mass shooting in Aurora Colorado at the screening of the new Batman movie in July of 2012 – 12 killed / 58 injured.