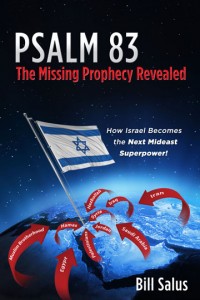 PSALM 83, The Missing Prophecy Revealed – How Israel Becomes the Next Mideast Superpower

Below you will find a brief excerpt from PSALM 83, The Missing Prophecy Revealed

As the table of contents reveals below, PSALM 83, The Missing Prophecy Revealed addresses all of the above, and so much more.

APPENDICES
Appendix 1- The Text of Psalm 83 and Ezekiel 38:1-39:20
Appendix 2- Psalm 83: Has It Found Final Fulfillment?
Appendix 3- Those Surrounding Israel to be Devoured!
Appendix 4- Is Ezekiel’s Army About to Face-Off with the Arabs?
Appendix 5- Ezekiel: Israel’s Dry Bones Can Fight
Appendix 6- Israel Strikes it Rich Someday!
Appendix 7- Is the Church Identified in Psalm 83?
Appendix 8- The Treasured Ones of Psalm 83
Appendix 9- Is Egypt in Psalm 83?
Appendix 10- The Sinner’s Salvation Prayer

BE SURE TO ORDER YOUR SIGNED COPY FROM THIS WEBSITE SOON…