Egypt was one of the first Arab countries to be affected by the Arab Spring of 2011. At the time liberal pundits in America sincerely believed that the social networks of Facebook, YouTube, and Twitter were providing the affected Arabs a genuine glimpse outside the confines of seventh century Islam and state censored media into life, liberty, and the pursuit of happiness. As a result they speculated that western style democracies would spring up like tulip gardens throughout the Middle East.

Almost two years later it is safe to say that the opposite has occurred. Nobody is tip – toeing through the tulips in the Fertile Crescent. In fact, the Arab Spring is beginning to look more like an Arab Apocalypse. Arabs are revolting against each other in Syria, deadly chemical weapons have come out of Syrian armories, Sunnis and Shiites are experiencing power struggles in certain Arab states, U.S. embassies are being attacked, Hezbollah has tens of thousands of rockets aimed at the Jewish state from Lebanon, and last but not least, Egypt is under the rule of the Muslim Brotherhood.

When it comes to Egypt, there is a familiar expression that says, “As goes Egypt, so goes the Middle East.” Considering Egypt is the most populated Arab country in the world, with about 80 million residents, it’s safe to suggest that this age – old adage still holds true. So who is the Muslim Brotherhood and how will they reform Egypt?

The Muslim Brotherhood is the Arab world’s most influential and largest Islamic movement. As such, it’s the largest political opposition organization in many Arab states. It was founded in Egypt in 1928 as a Pan-Islamic, religious, political, and social movement by the Islamic scholar and school teacher Hassan al-Banna.1

Some of the Muslim Brotherhood popular credos are:

• Islam is the solution,
• Allah is our objective,
• The Quran is our law,
• The Prophet (Mohammad) is our leader,
• Jihad is our way,
• And, death for the sake of Allah is the highest of our aspirations. 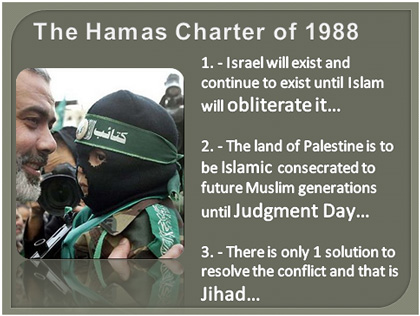 Contrary to liberal pundit expectations, none of the above reflects the political ideologies of any western style democracy; yet all of the slogans above sound very similar to several tenets contained in the Hamas Islamic Resistance Movement’s charter. This is probably because the Hamas was the political arm founded in the Gaza by the Muslim Brotherhood in 1987.2 Their charter formed in 1988 includes.

With tenets like these is it any wonder why the U.S. State Department Bureau of Counterterrorism recognizes Hamas as a terrorist organization?3 Moreover, it is a well – known fact that the Hamas refuses to recognize Israel’s right to exist as the Jewish state and has lobbed thousands of rockets into Israel since 2006. Hamas’s repeated aggression against Israel erupted into a twenty – two day conflict commencing on December 27, 2008 called Operation Cast Lead. Does this suggest that Hamas’s political parent, the Muslim Brotherhood, will also turn against Israel?

It’s important to note that Egyptian president Mohammad Morsi of the Muslim Brotherhood included the liberation of Gaza as an integral part of his presidential campaign. At a May, 2012 campaign rally Egyptian Cleric Safwat Higazi launched Morsi’s presidential campaign with a rally attended by thousands calling for a “United States of the Arabs” with Jerusalem as Its Capital. Cleric Higazi shouted to chanting crowds while Morsi sat on the stage near the podium soaking it all in, “Tomorrow Morsi will liberate Gaza,” … “Yes, we will either pray in Jerusalem or we will be martyred there.”4

Liberate Gaza from what? The obvious answer to this question from Hamas’s perspective is from Israeli occupation. Since Hamas doesn’t recognize Israel’s right to exist, they believe Israelis are trespassing on Palestinian land. If Morsi makes good on a campaign promise to liberate Gaza and possess Jerusalem, then he either needs to get rid of the Hamas or change their charter, or otherwise eradicate the Jewish state and conquer Jerusalem. Egypt presently has a treaty with Israel that was confirmed in 1979; will the Muslim Brotherhood honor this peace pact?

The probable outcome of the new Egypt’s precarious predicament is that Muslim Brotherhood will not honor this pact, but will violate it and war against Israel. There is a modern historical precedent established for military conflicts between Egypt and Israel. Wars between these two countries occurred in 1948, 1956, 1967, and 1973, and a future concluding conflict between these two nations seems to be predicted in the Bible.

Isaiah 19 informs that Egypt experiences civil unrest that evolves into a civil war, and ultimately burgeons into a regional conflict with Israel. In the process the Egyptian economy collapses and the people become governed by a cruel master. The regional conflict involving Egypt appears to be described in the ancient Psalm 83 prophecy.

The details and outcomes of both prophecies are described at length in my book Revelation Road, Hope Beyond the Horizon. For more information about these and other future Middle East Bible prophecies contact Jewish Voice Ministries. I also strongly recommend subscribing to the Jewish Voice magazine and supporting their excellent ministry.

1 Information gathered from Wikipedia over the Internet on 8/22/12 at this link http://en.wikipedia.org/wiki/Muslim_Brotherhood

3 The U.S. State Department list of terrorist organizations can be viewed on the Internet as of 8/23/12 at this link:
http://www.state.gov/j/ct/rls/other/des/123085.htm

4 This campaign rally can be read about and watched over the Internet as of 8/22/12 at this link: http://www.politisite.com/2012/06/18/muslim-brotherhood-leader-mursi-claims-victory-in-egypt-united-states-of-the-arabs-with-jerusalem-as-its-capital/