The Oracle of the Rhetorical – Part Two

This is part two of this study that addresses the burdens against the ancient Ammonites, Edomites, and Arameans, which today represents modern day Jordanians, Palestinians, and Syrians (Damascus).

There are a series of serious rhetorical questions asked in Jeremiah chapter 49 that appear to be intended for the Jordanians, Palestinians, and Syrians to answer today! Though these questions were written over 2500 years ago, they were intelligently and intentionally interwoven within prophecies that are positioned to find final fulfillments in these modern times. As such these questions must presumably be, and furthermore can only be, answered by these present Middle Eastern populations.

Hopefully by the time you read this section of the three part study you have read the chapter in my book Isralestine, The Ancient Blueprints of the Future Middle East labeled the “Whodomites”, “Who are the Edomites”. If not, please be encouraged to do so soon. The book is available at www.prophecydepot.com. It is paramount that that the reader possesses an understanding of whom the Edomites were in order to understand in part who the Palestinians presently are.

The Edomites originally occupied the territory that is today recognized as Southern Jordan. Throughout their history many of them migrated into Israel proper whereby they eventually became known as Idumeans, which is the Greek term for Edomites. A small contingency within the Palestinian population of today has ancestry traceable back to the Edomites. As Jeremiah moves from his advance against the Ammonites, (part one) he next fires out his rhetorical questions in succession against the Edomites, who would be best represented today by the Palestinians.

Against Edom. Thus says the LORD of hosts: “Is wisdom no more in Teman? Has counsel perished from the prudent? Has their wisdom vanished? (Jeremiah 49:7) 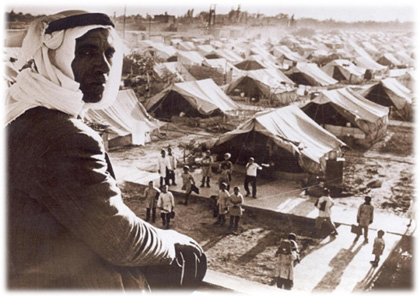 The Palestinians enjoin themselves alongside their Arab partners in the confederate effort prophesied about in Psalm 83. In that prophecy they are identified as the “tents of Edom”, most likely referring to them in a refugee condition. When the “tents of” phrase appears in the Bible to describe a people it either refers to a military encampment on the march to battle, or a displaced population of refugees.

The other members listed in Psalm 83:6-8 who are foretold to unite with the Palestinians in their plight are the Lebanese, Hezbollah, Hamas, Muslim Brotherhood, Syrians, Jordanians, Saudi Arabians, and Egyptians. In essence it is a confederacy comprised of all the territories that most closely border the nation Israel. It is important to recognize what their confederate mandate is according to the Psalmist:

(Psalm 83:4-8) They have taken crafty counsel against Your people, (The Jews) And consulted together against Your sheltered ones. They have said, “Come, and let us cut them off from being a nation, That the name of Israel may be remembered no more.” For they have consulted together with one consent; They form a confederacy against You: The tents of Edom (Palestinians) and the Ishmaelites; (Saudi Arabians) Moab (Jordanians) and the Hagrites; (Egyptians, Muslim Brotherhood) Gebal, Ammon, (Jordanians) and Amalek; Philistia (Palestinians, Hamas) with the inhabitants of Tyre; (Lebanese, Hezbollah) Assyria (Syrians) also has joined with them; They have helped the children of Lot. (Ammon and Moab – Jordanians)

It is against this backdrop that Jeremiah’s rhetorical questions find their legitimacy. This confederacy, including the Palestinians, “consults together with one consent.” They take “crafty counsel against” the Jews, from which they formulate a plan mandating the destruction of the modern day Jewish state. Their goal is to eradicate the nation from the face of the earth “That the name of Israel may be remembered no more.” Jeremiah asks them where is the “wisdom” in their futile plan? Not only is this campaign ignorant, it will prove to be a fatal mistake for these confederate populations.

These three rhetorical questions are directed at Edom, who is listed first in the grouping of the ten confederate members of Psalm 83. Esau, who was the twin brother of Jacob, also referred to as Israel, founded Edom (Genesis 36:1). “Now this is the genealogy of Esau, who is Edom.”

The Edomites and the Israeli’s shared a common kinship through these twin brothers. These two twins were both acutely aware of the promises made to their grandfather Abraham, by his God. As such they passed on their common knowledge of the Abrahamic Covenant down through their future generations.

This covenant assured Abraham, that he would always have descendents forever. These descendant heirs are the Jewish people. Furthermore the covenant promised a land to Abraham and his Jewish descendants. When Jeremiah asks of Edom “Is wisdom no more in Teman? Has counsel perished from the prudent? Has their wisdom vanished? We are to recognize that it is the wisdom of the contents of the Abrahamic Covenant, which he holds the Edomite contingency contained within the Palestinians of today, accountable to recollect.

Teman was the grandson of Esau, making Abraham his great-great-grandfather. Teman was one of the chiefs of Edom during his generation, and was renown in the region for his wisdom.1 This wisdom included an acute detailed understanding of the contents of the Abrahamic Covenant. What was common knowledge to Teman, and accredited to him as “wisdom”, has “vanished” from his descendants who were Edomites, then Idumeans, and now in part are Palestinians.

This line of questioning is designed to cause the Palestinians to consider the futility of their mischievous confederate plan with their neighboring Arab cohorts. Their plan is to destroy the Jewish people and to take over their promised land. Jeremiah points out through his rhetorical questions that “wisdom has vanished” from the Palestinians, and as such they HAVE NOT presented their Arab partners with the “prudent counsel” once possessed by their patriarch Teman!

Yes wisdom is no more in Teman?
Yes counsel has perished from the prudent?
Yes their wisdom has vanished?

They did not remember the contents of the Abrahamic Covenant, which guaranteed the survival of the Jewish people and their possession of the promised land of Israel. These “all-important facts” are the “counsel that has perished”, and the “wisdom that has vanished”!

Unfortunately in the absence of this invaluable information the Psalm 83 confederates set themselves up for a no win situation. How can they in Psalm 83:4 “cut them off from being a nation, That the name of Israel may be remembered no more?” How also do they plan to in Psalm 83:12 “Take the pastures of God for a possession?” In order to fulfill their confederate mandate they will need to first render the Abrahamic Covenant void and inoperative, which in essence will require their god Allah to overcome, Jehovah, the God of Abraham.

So therefore the Palestinians must deduce from the minor premise; which is that in order to destroy the Jewish nation, that the name Israel be remembered no more, the major premise has to be; that they have abandoned the wisdom of their patriarchs, and believe now that their god Allah is more powerful than the God Jehovah of Abraham.

The questions then arises, has Allah, the god of the Palestinians and their Arab cohorts, the power to cause these ordinances outlined by Jeremiah to depart from the control of (The LORD of hosts is His name)?

Jeremiah’s God Jehovah would like to hear their answer!