The Oracle of the Rhetorical

You are invited to a three part study that addresses the burdens against the ancient Ammonites, Edomites, and Arameans, which today represents modern day Jordanians, Palestinians, and Syrians (Damascus).

There are a series of serious rhetorical questions asked in Jeremiah chapter 49 that appear to be intended for the Jordanians, Palestinians, and Syrians to answer today! Though these questions were written over 2500 years ago, they were intelligently and intentionally interwoven within prophecies that are positioned to find final fulfillments in these modern times. As such these questions must presumably be, and furthermore can only be, answered by these present Middle Eastern populations.

Jeremiah asks the Jordanians, who are in part the descendants of the Ammonites, why they are homesteading the holy land promised to the Jewish descendants of Abraham.

Against the Ammonites. Thus says the LORD: Has Israel no sons? Has he no heir? Why then does Milcom inherit Gad, And his people dwell in its cities? (Jeremiah 49:1)

Notice that the passage begins with “Against the Ammonites” which puts this specific population group on alert that the information to follow has judgment implications. These people are going to be found guilty of doing something contrary to the will of God! Psalm 83:1-8 describes a coalition of Arab forces that form in the end times to destroy the nation Israel. Among them are the Jordanians and Palestinians. In the Psalm they are referenced by their ancient equivalents, the Ammonites and the Edomites. It is for this reason that this line of rhetorical questioning is aimed “Against” them.

Jeremiah asks the Jordanians if Israel has “no sons” left to inherit the Promised Land presented to Abraham by his God? This Promised Land was to span from the Nile River in Egypt, eastward toward the Euphrates River, which courses through the middle of modern day Iraq.1 God promised Abraham about 4000 years ago, that he would have descendant heirs through the lineage of his son Isaac, and grandson Jacob, that would someday possess all of this prime property.2 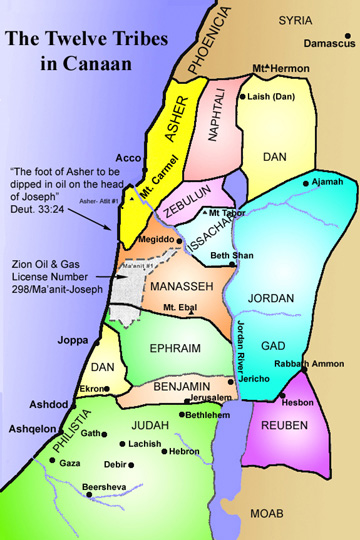 When Jeremiah asks; “Has Israel no sons? Has he no heir?” he is referring to Jacob; the grandson of Abraham, who was later renamed Israel by the God of Abraham.3 “Has Jacob no descendants?” Considering the foreknowledge of Jeremiah’s God, Who took into consideration that the Jewish people would be confronted by attempted genocide via the Germans; this is an astoundingly apropos question! Today we could appropriately format the question to read:

Against the Jordanians, did Hitler successfully annihilate the Jewish people, thus leaving Jacob no descendants? If not, why then does Allah inherit one of the tribal territories appropriated to the descendants of Israel, and you Jordanians trespass therein?

“Milcom”, was the God of the Ammonites during Jeremiah’s day. On or around the time of the advent of Islam in 622 A.D. the Ammonite descendants in connection with many other Middle Eastern Arabs forfeited their many gods in favor of the one god called “Allah”. As such any unfulfilled prophecies regarding the ancient Middle Eastern gods, will now find their fulfillment by association through Allah, the god of Islam. Remember that the Jewish prophets had no Allah to refer to at the time of their writings, so when they referenced an Arab god, they did so by their customary names at the time.

In essence the Jordanians are today accountable for their present occupation of land promised to the nation Israel. The nation of Jordan, as it was so recognized by the international community in 1946, sits squarely in the middle of the Promised Land of Israel. More specifically the Ammonites most closely represent the Northern portion of modern day Jordan, which Jeremiah says belongs to the Jewish tribe of “Gad”. Why then does Milcom inherit Gad, And his people dwell in its cities?”

The Jordanians are to deduce from the major premise that if their god overtakes “Gad”, then the minor premise is that the people of that god would feel authorized to possess the same subject territory. During the time of Jeremiah the common belief was that the god of a people would be the entity that would lead them to victory over peoples, and possession over places.

In modern application the shoe fits as follows: The Jordanians worship their god Allah, in land promised to the Jewish tribe of Gad. This infers that Allah has given to the Jordanians, the ancient land appropriated to the tribe of Gad, and as such, they are free to “dwell in its cities”. Jeremiah asks them “Why”, is it because there are no more Jewish descendants to claim this real estate as their inheritance?

Indeed if there were no more Jews then the Jordanians would certainly be free to possess the territory appropriated to the ancient tribe of Gad. Who or what God could prevent them from doing so? Certainly the God of the Jews and Christians couldn’t stop them, since that God would be a promise – breaking liar. Jeremiah formats the question in such a way, that if then there are still Jews, how dare the Jordanians trespass upon their inherited Promised Land? He holds them accountable to give any other justifiable reason for such unacceptable behavior.

The Jews were dispersed into the nations of the world for 1878 years. They were confronted with genocide but were protected from their final destruction by their promise keeping God Jehovah. They have been severely disciplined, more so than any other ethnic group in the history of the world. Today the world witnesses their divinely orchestrated return back into a small notch of the Promised Land. What then can be the justifiable Jordanian argument for stealing land from those it was previously promised to?