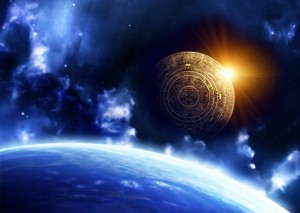 Fortunately astute Bible prophecy believers weren’t surprised when they woke up on December 22, 2012 and discovered that the Mayan Mesoamerican Long Count calendar was inaccurate. All the hype about the end of the world occurring on December 21, 2012 was baseless to them because they recognized that this present world wouldn’t end until seven-years of tribulation passed upon the earth.

The seven-year “Tribulation Period,” as it is commonly referred to in many Christian circles, is a major eschatological theme in the Bible. Other associated biblical tags for this period are, “Daniel’s Seventieth Week,” “The Day of the Lord,” “The Time of Jacob’s Trouble,” and several more. According to Daniel 9:26-27 this period commences when the Antichrist confirms a seven–year covenant with “many,” including the nation of Israel. We recognize Israel’s participation in this treaty from Isaiah 28:15 and 18, and Daniel 9:24.

Isaiah’s verses inform us that Israel at the time is extremely concerned about some “overflowing scourge” that is sweeping through the world. The Israeli leadership believes that by partaking of this future treaty, which Isaiah calls a “covenant with death,” enables the Jewish state to avert destruction. Daniel 9:24 clarifies that seventy weeks of years are determined for the Jews and the holy city of Jerusalem to accomplish seven important spiritual feats.

There are many portions of scripture that split this seven-year period of tribulation into two-parts. It is commonly taught among Bible prophecy teachers that the first three and one-half years present Israel with a period of peace, but that peace is abruptly interrupted at the mid-point when the Antichrist enters into the coming third Jewish temple, and fulfills the Daniel 11:31 and 12:11 prophecies Christ warned about in Matthew 24:15.

This abominable act of the Antichrist is commonly called the “Abomination of Desolation.” From that point forward the Antichrist attempts a final genocidal attempt of the Jews during the last three and one-half years of tribulation, which is often referred to as the “Great Tribulation” period. During the Great Tribulation Zechariah 13:8-9 warns that two-thirds of the Israelis will be killed, but fortunately the other third will survive and become a faithful believing remnant.

The glaring point of all this mind-boggling prophetic information above is that the Antichrist has not confirmed this seven-year covenant with Israel yet. Therefore the end of this present world can’t come for at least seven more years. In fact, I explain in my book, Revelation Road, Hope Beyond the Horizon, why there is probably a minimum of eleven and one-half years remaining on the end time’s clock. Below is a quote from the pertinent section of Revelation Road, but first here is an important preface. 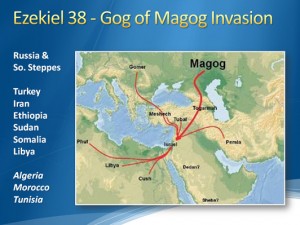 “THE EZEKIEL 38-39 GOG OF MAGOG INVASION IS PROBABLY A PRE-TRIBULATION EVENT.”

In fifty-two highly descriptive passages the prophet Ezekiel predicts that nine sizable populations will invade Israel in the “latter years.” This is a prophecy that many Bible prophecy teachers are expecting to find final fulfillment in the near future. The image identifies the consensus among many scholars of who these ancient populations represent on a modern day map. (1) (The arrows point from Gomer, Meshech, Tubal, Persia, Magog, Togarmah, Put, Libya, and Cush)

Fortunately, the Lord intervenes on Israel’s behalf and divinely defeats this formidable Gog of Magog coalition according to Ezekiel 38:18-39:6. Subsequently, the nation of Israel embarks upon a national campaign to harness the energy from the weapons of these defeated enemies. With this in mind the quote from Revelation Road reads as follows;

“Ezekiel 39:9-10 suggests Israel will possess the know-how to convert the weapons of mass destruction possessed by the Ezekiel 38 invaders into fuel. Israel appears to utilize these weapons for fuel and energy consumption for a period of seven-years. This will be no problem during the peaceful first half of the tribulation, but not likely during the perilous second half, because Jews will be fleeing for their lives, rather than harnessing this energy.

Therefore, many scholars suggest that Ezekiel 38 must conclude, not commence, no later than three and one-half years before the seven-years of tribulation even begins. This allows the Jews seven full years to burn the weapons before they begin fleeing for their lives. Realistically, it will probably take approximately a year to even collect, dismantle, and covert the weapons cache prior to that.

Here’s how this could break down incrementally in real time. Allow about one year for the Ezekiel 38 battle to occur and the weapons to be converted. Remember, assembling a coalition and mobilizing an invasion of the scope described in Ezekiel 38 is no twenty-four hour undertaking. Then consider an additional seven-year span to burn the weapons. And lastly, add in the final three and one-half years of Great Tribulation, for a total of eleven and one-half years.

If this hypothesis is correct, this means that at least (underscore at least because it’s probably going to be longer) that from the time the Ezekiel 38 invasion begins until the second coming of Christ to set up His kingdom, there will exist approximately eleven and one-half years. I could be more technical on the timing, because Daniel 12:11-12 adds an additional seventy-five days to the equation. His infamous ‘Seventieth Week’ ends, and then the two and one-half month interval kicks in, at which time the sheep and goat judgment of Matthew 25:32-46 seemingly takes place.” (2)

In conclusion; according to the Bible prophecies listed in this article, it appears that the present world appears to survive at least until the year 2024! This is not a prediction, but rather an educated prophetic observation.

Some scholars teach that little or no time separates the Gog of Magog invasion from the Tribulation period, and others believe the invasion actually occurs during the Tribulation. I agree with those that teach the Ezekiel 38 invasion must conclude at least three and one-half years before the seven-years of tribulation commences. After the Ezekiel invasion Israel may have more than seven-years of weapons supply for energy consumption. They could have ten or more years for all we know. But one thing seems almost certain, that at the mid-point of the Tribulation period when the genocidal campaign of the Antichrist is in full swing, Israelis appear to be fleeing for their lives rather than converting enemy weapons into sources of energy.