Land for Mideast Peace, What does the Bible Say? 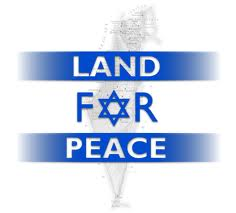 Presently, there is an unprecedented push for peace in the Mideast. Newly appointed Secretary of State, John Kerry is redefining “Shuttle Diplomacy” by making bi-weekly visits to the Holy Land. Alongside the Obama Administration, the United Nations and the Arab League appear to be united in a consensus that this is a historic opportunity to resolve the longstanding Israeli-Palestinian conflict. Collectively from distant continents, they are all encouraging Israel to accept the Saudi Peace Initiative.

The liberal pundits are calling the renewed push by the Obama Administration for Mideast peace, a “Window of Opportunity.” Is this truly the opportune time to persuade Israelis to forfeit land for illusive peace, or is this latest peace push the result of a heightened concern that a Middle East war is imminent?

Currently, the international prescription for two states comprised of Jews and Palestinians living autonomously and peacefully side by side requires Israel to destroy Jewish outposts, freeze settlements, forfeit land acquired after 1967, divide Jerusalem and allow Palestinian refugees to homestead the Holy Land. These refugees number in the millions, and represent a second-generation population that generally hates and blames the Jews for their impoverished existence.

From the political perspective it is quite apparent that the international community has become increasingly empathetic to the Palestinian plight, but apathetic to God’s foreign policy contained in Genesis 12:3 and the one-state solution prescribed in Jeremiah 12:14-17. Genesis 12:3 bestows blessings upon those that bless the Israeli descendants of Abraham, but conversely must curse those populations that oppose them. Jeremiah 12:15-17 follows stride by declaring that God would have compassion on the pro-Israel populations, but “will utterly pluck up and destroy” Israel’s neighbors who fail to operate in compliance with God’s plan for peace.

This article takes a closer look at the biblical, rather than the political, plan for Mideast peace between the Arabs and Jews.

The Bible foretold in Isaiah 11:11, Ezekiel 36:22-24, Ezekiel 37:12 and elsewhere of a time when the Jews would be brought back into the Promised Land from the nations of the world. This regathering began over six decades ago on May 14, 1948, and is ongoing today. Possessing omniscient foresight, God foreknew that an Arab-Israeli conflict would erupt as a result.

Jeremiah 12:14-17 tells us that as the time drew near for the return of the Jews into Israel the landscape of the Middle East would undergo a geopolitical facelift as God intended to restore Arabs, Persians and Jews back into the historical homes of their ancestral heritages. After the fall of the Ottoman Empire in 1917, we see this turn of geopolitical events take place as one by one the Arab, Persian and Jewish states emerged:

Jeremiah’s verses make it clear that God would import the Jews into Israel and export the Arabs and Persians out of Israel when the time came for the implementation of God’s one-state solution. Jeremiah 12:14 refers to the Arab and Persian populations as “My evil neighbors who touch the inheritance which I have caused My people Israel to inherit,” alluding to the Promised Land given to the Jewish Patriarch Abraham in Genesis 15:18. As stated prior, God intended to have compassion on those populations that would operate in compliance with His divine plan.

As I point out in my book, “Psalm 83 – The Missing Prophecy Revealed, How Israel Becomes the Next Mideast Superpower,” many predominately Islamic populations will fail to comply. These nations and/or terrorist entities are described in Psalm 83 and Ezekiel 38 and include, but are not limited to: Palestinians, Syrians, Hezbollah, Hamas, Iranians, Lebanese, Jordanians, Saudis, Egyptians, Muslim Brotherhood, Libyans and Turks.

For even your brothers, the house of your father, Even they have dealt treacherously with you; Yes, they have called a multitude after you. Do not believe them, Even though they speak smooth words to you. (Jeremiah 12:6; NKJV)

In the above passage Jeremiah appears to issue a stern warning to the modern-day state of Israel not to believe the smooth words of the descendants of their ancestral brothers. Without going into a detailed Bible study, the abbreviated interpretation is likely as follows:

The subjects of Jeremiah 12:6 for the most part are the Jews, Saudis and Palestinians. The “brothers” of the Jews from the “house of” their Hebrew fathers Abraham, Isaac and Jacob were Ishmael and Esau. Ishmael was the half-brother of Isaac, and Esau was the twin brother of Jacob. Jacob was renamed Israel in Genesis 32:28, and Esau was also referred to as Edom in Genesis 36:1-9. Both Ishmael in Genesis 21:18 and Esau in Genesis 25:23 were promised to father nations. Ishmael is generally associated today with Saudi Arabia, and Esau with the Palestinians. (Psalm 83 – the Missing Prophecy Revealed details who the Palestinians are today). 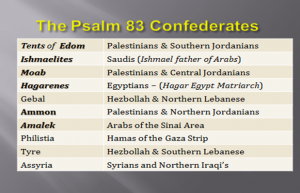 The “multitude” formed by the “brothers” Ishmael and Edom is most likely the confederacy tabled here contained in Psalm 83 that ultimately seeks to destroy the modern-day Jewish state, “that the name Israel be remembered no more” (Psalm 83:4).

The “smooth words” are deceptive and the Jews are cautioned not to trust them. They are likely penned in the Saudi Mideast peace plan initiated at the Beirut Summit of the Arab League in March of 2002. This Saudi peace initiative calls for a two-state solution that embraces and strongly favors the Palestinian plight. In a nutshell it requires Israel to withdraw from the territories acquired in the aftermath of the “Six-Day” war in June of 1967 and to provide for the establishment of a Palestinian state with East Jerusalem as its capital. Furthermore, it calls for the return of millions of Palestinian refugees into Israel. In return, Arab states, like those listed in Psalm 83, would establish normal relations with Israel.

Sounds pretty smooth on the surface, but in application it puts Israel in harm’s way. Surrendering land, like the Golan Heights for instance, would compromise Israel’s security from external attacks, and assimilating refugees who hate Israel would subject the Jewish state to terrorism and turmoil from within. The bottom line is that the Arabs don’t want peace with the Jews; they want another Arab state called Palestine and they feel the only way to ultimately achieve this goal is to destroy modern-day Israel. The Saudi two-state solution puts the enemies of Israel one step closer to the kill.

Jeremiah appears to be warning his descendant Jewish brothers and sisters of today to Say NO to the Saudi two-state solution!

This article is revised from a World Net Daily article on June 26, 2009 called: Jeremiah to today’s Israel: No 2-state solution!