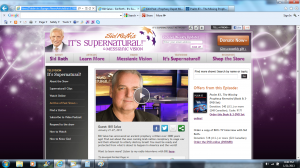 WATCH THE IT’S SUPERNATURAL TV SHOW AT THIS LINK or click the image.

Future television interviews have also been prerecorded with Jewish Voice TV, Prophecy in the News TV, and Stakelbeck on Terror, which will all be posted on this site when they are shown on the top popular Christian TV stations.

Click HERE now to listen to these fascinating radio interviews.