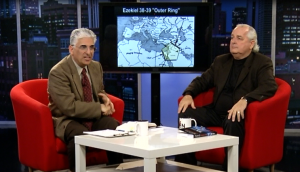 This video is part one of two that was filmed in the studios of Iran Alive Ministries. Hormoz Shariat, the founder of Iran Alive and the host of the TV show, interviewed Bill Salus in April, 2014, about the prophecies of Psalm 83 and Ezekiel 38. Salus teaches in English, while Shariat translates into Farsi.

Millions of Farsi speaking peoples in Iran, Afghanistan and Tajikistan watched this program. These three countries rank in the top 10 of the countries that are currently experiencing a per capita boom in Christian conversions. Iran is #1, Afghanistan #2, and Tajikistan is #10. Bible prophecy expert Joel Rosenberg calls Hormoz Shariat the “Billy Graham of Iran.”