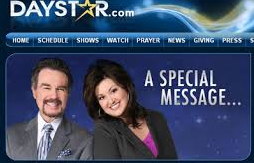 On April 1, 2014 Bill Salus appeared on Daystar TV for the “Marcus & Joni” Show. During the interview Bill had scarcely introduced the Arab-Israeli war prophesied in Psalm 83, when Marcus began asking about Israel’ nuclear weapons program. From there the show spun off into a combination history, prophecy and geo-political conversation.

Marcus was so interested in the timely information that he asked some personal “Marcus” questions, which he seldom does on the show. He wanted to know why the blessings of Abraham were forfeited by Esau (Edomites/Palestinians) and were instead given to Jacob (Israel).

Marcus also asked Bill what advice he would give Secretary of State John Kerry about the Mideast peace process. Bill directed the viewer’s attention to God’s peace plan in Jeremiah 12:14-17 and God’s foreign policy for the Gentiles in Genesis 12:3.

Joni wanted to know about the prophetic ramifications about Russia’s recent takeover of Crimea. She also inquired about the Irish Dead Sea Scroll discovery of Psalm 83 in Ireland on July 26, 2006.

Click HERE to watch this timely and fascinating program. This may be one of Bill’s best TV interviews.