The 7 Letters of Revelation (Missler and Salus) 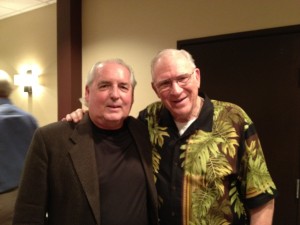 One of the several ways scholars confidently predict that we are currently living at the end of the Church age, is through the prophetic interpretation of the seven letters to the seven churches in Revelation 2 and 3. Many eschatologists teach that these letters were partially intended to chronologically order the seven stages of church development throughout its earthly existence.

In essence, these letters include an intrinsic prophetic value intended to offer more than just contemporary instruction to the specific seven churches existing at the time of issuance. Fortunately, today’s experts have the opportune advantage of looking back upon church history, which enables them to accurately make this association.

You are invited to listen to an excellent radio interview with Bill Salus and Dr. Chuck Missler concerning this subject. This instructive program explores the prophetic significance of the 7 letters written in Revelation 2 and 3.

Below is a basic outline of the chronological development of the Christian church in accordance with the blueprints of the seven letters in Revelation. This outline reveals that we are living in the final days of church development, the “days of Laodicea.”

Ephesus (Revelation 2:1-7) (AD 40-150)
The first stage of Christianity was primarily an apostolic period. Christians operated in compliance with Matthew 28:18-20. It was a time of reconciliation whereby the disciples successfully preached the Good News gospel of Jesus Christ outwardly from Jerusalem into the surrounding Gentile populations of the world. This was Christianity in its infancy, and as a religion, it was rapidly spreading throughout the broader Middle East region and into the greater Roman Empire.

Click HERE to pick up your copy of Dr. Chuck Misslers latest book entitled, I Jesus, An Autobiography.

Smyrna (Revelation 2:8-11) (AD 100-312)
This segment of church history was characterized by a period of persecution. Rome was conducting wide-scale Christian executions in an attempt to prevent the growth and spread of the religion. Martyrdom was the unfortunate predicament forced upon the church by the Roman Empire during the Smyrna era. However, to Rome’s chagrin, the persecutions actually bolstered the growth of Christianity. Christians dying for their faith caught the attention of multitudes that in turn fixated their focus upon Christ as their Savior.

Pergamos (Revelation 2:12-17) (AD 300-600)
The period of Pergamos, meaning “mixed marriage” in Greek, is associated with the paganization of the church. As the Roman Empire began its decline, it embraced Christianity as its state religion. This served two primary purposes. First, it began to fill deepening political rifts developing in the deteriorating Roman government; and secondly, it facilitated the survival of faltering pagan religious practices by cleverly integrating and incubating them into Christianity. Also, the martyrdom period of Smyrna that experienced Christianity flourishing became problematic for Rome. Each martyr’s death brought new and renewed strength among fellow Christians. Thus Rome adopted the attitude, “If you can’t beat them [kill all the Christians], join them.” Throughout time, this Roman attitude eventually led many Christians to reciprocate and romanticize Romanism, and to believe that “when in Rome, do as the Romans do.”

During the Pergamos period, Christianity essentially was asked to compromise itself—and in so doing, create an end to the persecutions occurring during the Smyrna stage. By marrying up with Roman paganism, Christianity was insured its survival. Shortly thereafter, ancient Roman religious practices began to permeate and adulterate the church. Christian traditions such as Christmas trees and Yule logs can likely be traced to this Pergamos period of church history.

Thyatira (Revelation 2:18-29) (AD 600-Tribulation)
This church is commonly thought to represent the Roman Catholic Church, which evolved out of the Pergamos period. Thyatira tends to be a works-based rather than a faith-based church. In so doing, it emphasizes the religious rather than relational importance between God and humanity. Revelation 2:22 declares that an apostate element within Thyatira will exist in the end times and be cast into the “sickbed” of the Great Tribulation period.

Sardis (Revelation 3:1-6) (AD 1500-Tribulation)
This period is best described as the Protestant Reformation; however, it lacked true transformation. Salvation through faith rather than works was reintroduced within Christianity; however, the Reformation continued to be more about religion than about a personal relationship with God.

Philadelphia (Revelation 3:7-13) (AD 1800-Rapture)
Powerful, worldwide missionary movements beginning in the mid 1600s characterize the period of Philadelphia. In accordance with Matthew 28:18-20, this church answered the call to the “Ministry of Reconciliation.” The Philadelphian period concludes with the Rapture.

Laodicea (Revelation 3:14-22) (AD 1900-Tribulation)
This church began in the twentieth century and will continue on into the seven-year Tribulation period. This last-days church is guilty of preaching a social rather than a spiritual gospel.

Many eschatologists believe that the world hourglass has made its final turn, and that the church alas has entered into the “days of Laodicea.” However, they also believe that up until the Rapture, the Philadelphian component still will preside in the Christian equation. As such, it is important to interpret through the prophetic lens the key passages contained in the pertinent sixth and seventh letters to the seven churches that validate this scholarly viewpoint.

The outline above is taken from the Appendix called “The Final Century—Christian Survival versus Pagan Revival.” The Appendix is contained in Bill’s book entitled, Revelation Road, Hope Beyond the Horizon.