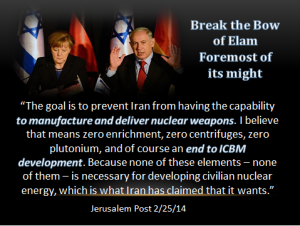 It sounds absurd, but Israeli officials are warning that Iran could strike America with a nuclear weapon in 2015!

Prime Minister Benjamin Netanyahu has dual concerns about Iran’s nuclear ambitions. He has publicly stated, “The goal is to prevent Iran from having the capability to manufacture and deliver nuclear weapons. That means zero enrichment, zero centrifuges, zero plutonium, and of course an end to ICBM (Inter Continental Ballistic Missiles) development.”

Nuclear negotiations with Iran continue to fail and Israel can wait no longer. They are likely to strike Iran’s nuclear and ICBM programs in 2015. This could result in an epic biblical disaster! It may be exactly what the ancient prophecy inscribed in Jeremiah 49:34-39 informs us about!

You are invited to watch part one of a two part Prophecy in the News TV program that unveils Jeremiah’s ancient prophecy of Elam, (Iran). These TV programs have recently aired internationally on many mainstream Christian networks.

Iran has double trouble in the end times. They are part of Ezekiel 38, the Magog Invasion, and Jeremiah 49, the nuclear disaster of Elam! Jeremiah’s vastly overlooked prophecy is probably the next biblical predictions to find fulfillment!