Jeremiah 49: Jordan Will Tremble and Fall! 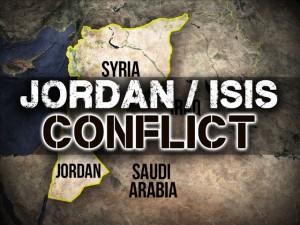 Another ancient Bible prophecy seems to be nearing its fulfillment! The subject nation of this vastly overlooked prediction is Jordan. Approximately 2600 years ago, the Hebrew prophet Jeremiah foretold of a tormenting fear that would someday engulf this Arab state.

The prophecy informs that Jordan will tremble as troubling events close in on all sides of its borders. Jeremiah 49:5 says “Behold, I am going to bring terror upon you,” Says the Lord GOD of hosts, “From all your neighbors…” (i) In other words, terrorizing geo-political events surrounding Jordan will destabilize the nation. This type of terror has never overtaken this territory until now!

According to Jeremiah 49:1-5; the instability that occurs within the country burgeons into an epic biblical war against Israel, which results in Jordan’s destruction and the expansion of the Jewish state.

Therefore behold, the days are coming,” says the LORD, “That I will cause to be heard an alarm of war In Rabbah (Amman, Jordan) of the Ammonites; It shall be a desolate mound, And her villages shall be burned with fire. Then Israel shall take possession of his (land) inheritance,” says the LORD. (Jer. 49:2-3, NKJV)

Presently, Jordan faces trouble on every front. ISIS has its sights on Jordan and is pressing in from the north and northeast from strongholds in Syria and Iraq. ISIS has sympathizers inside of Jordan, like they do in Iraq and Syria. The Iraqi and Syrian partisans played a significant role in the expansion of ISIS into those countries. The ISIS supporters in Jordan, like their Iraqi and Syrian counterparts, embrace the same goal of an Islamic State in the Levant (ISIL), which is another acronym that ISIS goes by. 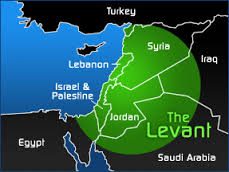 As the map points out, Jordan sits in the heart of the Levant. The concern is that ISIL will lockstep with their Jordanian adherents and capture Jordan.

Additionally, exiles continue to flood into Jordan from the turmoil in Iraq and Syria by the tens of thousands. According to King Abdullah II, there are approximately 1.5 million refugees presently encamped in Jordan. This is comparable to about 22% of Jordan’s overall population. In addition to creating economic and political volatility, many of these fugitives are prime candidates for ISIS recruitment.

On the eastern front Jordan is unnerved by Iran’s attempt to spread its hegemony in its direction through significant troop deployments into the embattled areas of Iraq and Syria. Moreover, Iran’s funding of terrorist organizations like Hezbollah, (to the north) Hamas, (to the east) and the Houthis, (to the south) further aggravates Jordan’s situation.

Of equal or greater concern is Iran’s burgeoning nuclear program and unhindered development of intercontinental ballistic missiles (ICBM). These ICBM’s, which are designed to carry weapons of mass destruction, could someday land in Jordan, or fly over its airspace on route to Israel or America. Iran believes Israel is the “Little Satan” and America the “Great Satan.”

Hezbollah’s growing presence to Jordan’s northwest in the Golan Heights intensifies the already existent tension between Israel and Syria. On Jordan’s western front, Israel is bracing for another possible war with Hezbollah, which could eventuate in over 1500 missiles being launched into Israel daily. In anticipation, Israel is fitting many of its bomb shelters with high speed wireless Internet capabilities. Israelis refuged underground, for perhaps weeks at a time, will need to know what’s happening to their country.

Once serving as a buffer state between Israel and the broader Muslim dominated Middle East, Jordan is on the verge of becoming more of a liability than an asset to the survival of the Jewish state. This is partially because the Jordanian Armed Forces are no military match for all the firepower mobilizing around it. These forces are mainly put in place to preserve the posterity of the ruling Hashemite kingdom. In the likely event of an ISIS external aggression against Jordan, and / or subversion from within Jordan, Israel could be drawn into the conflict. Israel has hinted that it would, if Jordan requests, ally with Jordan against ISIS.

Terrorism in the Sinai to Jordan’s south complicates matters further because much needed gas resources from there are under constant threat. The Ansar Bayt al-Maqdis Sinai based terrorist group, who has pledged allegiance to ISIS, has bombed gas pipelines into Jordan in the recent past. Terrorist groups like this that align with ISIS are another growing concern for Jordan. Like Ansar Bayt al-Maqdis, the Jabhat al-Nusra terrorist organization based in Syria has also joined with ISIS. 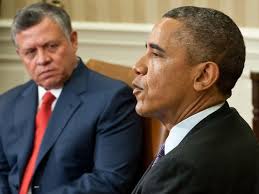 These are just a few of the geo-political concerns that prompted Jordan’s King Abdullah II to come to Washington in February and December of 2014 and again in February, 2015. This trio of recent visits evidences Jordan’s urgent concerns about what’s going on in their neighborhood.

These visitations were primarily intended to enlist America’s strategic support against the spread of ISIS in the region, and to move the Palestinian – Israeli peace talks forward. There are an estimated 3.24 million Palestinians living in Jordan, nearly one-half of the country’s overall population, many of which are discontent with the current Jordanian leadership. From King Abdullah’s perspective, peace between the Palestinians and Israelis could provide some respite to the internal political strife occurring inside of Jordan. These Palestinians want a state of their own or at least more civil liberties within Jordan.

With all the geo-political mayhem around him, King Abdullah II is justifiably concerned about his and his country’s future. Since the Arab Spring in 2011, he has seen the removal of longstanding leaders and allies in Egypt, Tunisia, Libya, Yemen and recently in Saudi Arabia, with the death of King Abdullah bin Abdulaziz. With the passing of these old guards the Jordanian king finds himself much more reliant on the strange bedfellows of America and Israel for his posterity.

WHY JORDAN and WHY NOW?

Presuming all the above is what drives the fear spoken of in Jeremiah’s ancient prediction, the questions are why Jordan; and why now? After all, Jordan maintains a peace treaty with Israel, and is generally pro-western and is regarded by many as the most moderate Arab state in the Middle East.

The answers to these questions are found in Jeremiah’s entire prophecy, along with parallel prophecies in Psalm 83, Zephaniah 2, Amos 1, Isaiah 11 and elsewhere. The element of fear overtaking Jordan is only a small part of the country’s foretold future.

Jeremiah 49:1-2, Zephaniah 2:8-9 and Amos 1:13 point out that Jordan is guilty of enlarging its borders at Israel’s expense. Jordan is located within the borders of the “Promised Land” given to the Israelites through Abraham (Genesis 15:18), Isaac (Gen. 26:4) and Jacob (Gen. 28:13). This land spans from the Nile River in Egypt to the Euphrates in Iraq and Syria. 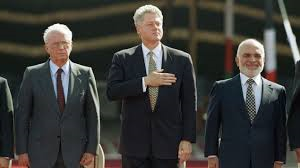 From the biblical perspective, Jordan is trespassing on prime property that Israel needs to secure and enlarge its borders. The Lord’s prophetic plan, which is ongoing presently, was to regather the Jews from the nations of the world into the re-established nation of Israel as the Jewish state. Throughout most of Jordan’s modern history it has been an obstacle to this sovereign strategy. Even today, Jordan, like the additional 21 members in the Arab League, refuses to recognize Israel’s right to exist as the Jewish state.

In the prophetic scheme of things, Jordan’s peace treaty with Israel is geo-politically expedient and paper thin. After soundly losing three conventional wars in 1948, 1967 and 1973 against Israel, Jordan’s former King Hussein found it lucrative economically, geographically, militarily and politically to befriend Israel. This was not, and is still not, considered to be a popular move by the majority of the Muslim world, which is mostly pro-Palestinian and anti-Israel.

Psalm 83 presents the most problematic prophecy concerning Jordan’s future. It identifies Jordan as the “children of Lot,” who were Ammon and Moab. Ammon and Moab team up in a ten member Arab confederacy that wants to wipe Israel off of the map and ultimately take possession of the Promised Land.

Psalm 83:8 predicts that Jordan will be supported by Assyria, which at the time encompassed parts of modern day Syria and Iraq.

The stage is set in the Middle East Theater for several ancient Bible prophecies to find their literal fulfillment. Jeremiah’s prophecy concerning Jordan is only one of them. To learn more about these end time’s prophecies and why they will happen soon, you will want to watch the Bill Salus DVD entitled, Psalm 83: The Missing Prophecy Revealed, How Israel Becomes the Next Mideast Superpower.

(i) NRSV Jer. 49:5 I am going to bring terror upon you, says the Lord GOD of hosts, from all your neighbors, and you will be scattered, each headlong, with no one to gather the fugitives.