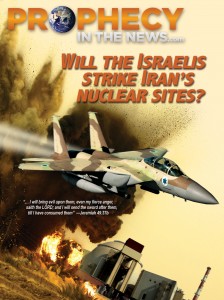 This Bill Salus article was featured in the January, 2015 edition of the Prophecy in the News magazine.
(Photo-montage by Daniel M. Wright of CreatedWright.com)

The million dollar question is: Will Israel make good on its threats to attack Iran’s complex nuclear program, which is relatively vast, concealed and well protected? Israel has a historical precedent for destroying enemy nuclear sites in the Middle East. They struck the Osirak reactor located in the heartland of Iraq in June of 1981. Then, just before midnight on September 5, 2007, four Israeli F-15s and four F-16s skirted the skies over the Syrian-Turkish border, to avoid radar detection, and attacked the Al-Kibar Syrian nuclear facility on September 6, 2007.

The answer to this question is emphatically YES! Israel is prepared to strike Iran if necessary. They take Ayatollah Khamenei’s threats of annihilation seriously and literally. Iran’s Supreme Leader has called Israel a “fake Zionist regime,” a “cancerous tumor” and a “rabid dog.” In a recent tweet tirade the Ayatollah wrote: “This barbaric, wolflike & infanticidal regime of #Israel which spares no crime has no cure but to be annihilated.”(1) Shortly after tweeting this genocidal remark, Khamenei posted his 9-point plan to destroy Israel on his Twitter account.

The grim reality for Israel is that a conventional-weapons attack against Iran now, is much more preferable to the nuclear war that is certain to come. Strategic logic encourages the possibility that Israel will strike Iran in the near future. With Iran’s November 24, 2014 nuclear negotiations deadline coming up empty and the November 4, 2014 American midterm elections swaying heavily Republican, the timing for Israel to attack Iran draws near. This is because the current political climate in the US Congress is mostly pro-Israel and anti-Iran. Israel should be able to garnish more US approval to confront Iran now than when negotiations were racing toward their November 24th deadline, and the Senate was controlled by the Democrats.

Now that the geo-political case has been briefly made for the potential coming confrontation between Israel and Iran, let me introduce the prophet Jeremiah’s prophecy of Elam. The ancient territory of Elam is located in modern day Iran. It is situated in the westernmost part of the country bordering much of the Persian Gulf.

Around 2600 years ago this Hebrew seer predicted that a disaster would occur in this region. The details of this vastly overlooked prophecy are provided in my book and accompanying DVD entitled, Nuclear Showdown in Iran, Revealing the Ancient Prophecy of Elam.

This prophecy is contained in the six explosive verses below.

The word of the LORD that came to Jeremiah the prophet against Elam, in the beginning of the reign of Zedekiah king of Judah, saying, “Thus says the LORD of hosts: ‘Behold, I will break the bow of Elam, The foremost of their might. Against Elam I will bring the four winds From the four quarters of heaven, And scatter them toward all those winds; There shall be no nations where the outcasts of Elam will not go. For I will cause Elam to be dismayed before their enemies And before those who seek their life. I will bring disaster upon them, My fierce anger,’ says the LORD; ‘And I will send the sword after them Until I have consumed them. (Jeremiah 49:34-37, NKJV).(2)

These first four verses above spell out the extremely bad news for the territory and most importantly the inhabitants of Elam. The concluding verses below, present the affected Iranians with good news.

I will set My throne in Elam, And will destroy from there the king and the princes,’ says the LORD. ‘But it shall come to pass in the latter days: I will bring back the captives of Elam,’ says the LORD.” (Jer. 49:38-39).

THE ARTICLE CONTINUES BELOW THIS “END TIMES SEER” VIDEO ABOUT ELAM / IRAN.

The following is an attempt to infuse these verses into biblical commentary alongside actual and possible future news headlines, in order to provide a real time interpretation of Jeremiah 49:34-39. At first glance, this unique approach of writing may appear to be a bad case of newspaper exegesis, an author’s attempt to make biblical Scriptures marry up with current events. However, after reading the extensive research provided in my book, I believe you will forgive the author liberties taken below. 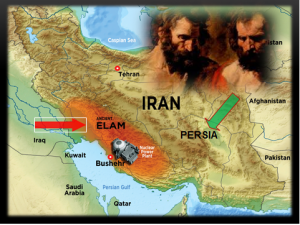 Jer. 49:34: The word of the LORD that came to Jeremiah the prophet against Elam, in the beginning of the reign of Zedekiah king of Judah, saying,

“Iran Has Double Trouble Ahead, Ezekiel 38 and Jeremiah 49”

This prophecy concerning Elam was issued about 596 BC. Jeremiah wrote about Elam about a decade before his contemporary Ezekiel prophesied about Persia in Ezekiel 38:5. Ezekiel’s ministry spanned between 595-573 BC.(3) Modern day Iran is comprised of ancient Elam and Persia. Ezekiel was familiar with Elam according to Ezekiel 32:24-25, but he did not include Elam in the lineup of invaders in Ezekiel 38. Elam was probably intentionally omitted, because it is the subject of its own distinctly different prophecy, provided by Jeremiah.

“Israeli PM threatens to strike Iran” “Benjamin Netanyahu says Israel may have to act against Tehran unilaterally to curb it from achieving its nuclear goal.”-Al Jazeera 7/17/13

The Elamites were warlike people and expert archers according to Genesis 14:1-9 and Isaiah 22:6. Jeremiah predicts that Iran will suffer the fate of a broken bow, which might imply that the IRGC (Iranian Revolutionary Guard Corps) will be unable to launch scores of its missiles at its enemies. Additionally, he declares that Iran will be struck at the foremost place of its might, which today could infer an attack upon its nuclear program. One of Iran’s most strategic and vulnerable nuclear targets is the Bushehr nuclear reactor located in the heart of ancient Elam. This is a forty year old facility with a 30 year old cooling system, and nobody working at the facility is trained to handle a nuclear disaster.

“The goal is to prevent Iran from having the capability to manufacture and deliver
nuclear weapons. I believe that means zero enrichment, zero centrifuges, zero plutonium,
and of course an end to ICBM development. Because none of these elements – none of them –
is necessary for developing civilian nuclear energy, which is what Iran has claimed that it wants.”(4)

Jer. 49:36: Against Elam I will bring the four winds From the four quarters of heaven, And scatter them toward all those winds; There shall be no nations where the outcasts of Elam will not go. 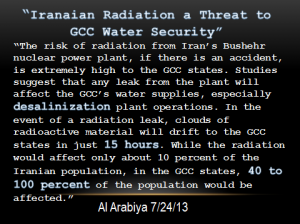 “Bushehr, however, could turn out to be the most dangerous piece of
Iran’s nuclear puzzle for another reason: haphazard planning and
ongoing technical problems mean it could be the next Chernobyl,
igniting a humanitarian disaster and explosive economic damage across
the oil-rich region.”

Jeremiah informs that the attack upon the ancient territory of Elam will produce numerous refugees, perhaps even turning into a humanitarian crisis. Exiles will be dispersed worldwide, as if being blown about by overpowering winds. Several studies conducted of the safety of the Bushehr nuclear site have concluded that a disaster at the facility could result in a far greater disaster than Chernobyl.

(Image) The GCC (Gulf Cooperative Council) consists of Kuwait, Saudi Arabia, Bahrain, Qatar, U.A.E. and Oman. This Al Arabiya quote came from a study that was prompted by a 6.8 earthquake in the Bushehr province in April of 2013. The Bushehr nuclear facility is constructed upon a site where three tectonic plates converge. It is a nuclear disaster waiting to happen!

Jer. 49:37: For I will cause Elam to be dismayed before their enemies And before those who seek their life. I will bring disaster upon them, My fierce anger,’ says the LORD; ‘And I will send the sword after them Until I have consumed them.

“Iranian Commander; We have Targets Within America”- The Daily Caller 2/1/14

In addition to the Lord, Iran has enemies in this prophecy. The headlines above depict a few of them. Each enemy, for varying reasons, seeks to prevent Iran from becoming a nuclear nation. Additionally, Jeremiah says that Iran has fiercely angered the Lord, and that provokes the Lord to cause a severe disaster inside of Iran. Perhaps this alludes to a nuclear disaster caused from a strike upon Iran’s Bushehr nuclear reactor. Nuclear Showdown in Iran explains how the present Iranian regime has fiercely angered the Lord.

Jer. 49:38-39: I will set My throne in Elam, And will destroy from there the king and the princes,’ says the LORD. ‘But it shall come to pass in the latter days: I will bring back the captives of Elam,’ says the LORD.”

Jeremiah’s last two verses present the exiles of Jeremiah 49:36 with great news. Iranians, who accept Christ in advance of His second coming, will be returned from global exile into the restored fortunes of their historic homeland in Elam. This restoration process should find fulfillment sometime during the millennial reign of Christ.(5) Moreover, Jerusalem (Jer. 3:17) and Elam (Jer. 49:38) are the only two earthly locations identified in Scripture for the future establishment of the Lord’s throne. 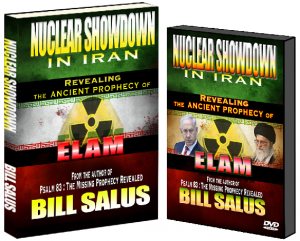 Presently, several million Iranians have already become born again believers in Christ. In fact, Iran has the fastest growing evangelical population in the world.(6) Multitudes of Iranians are accepting Jesus as their Savior through watching Christian satellite TV and experiencing miracles, dreams, visions and healings. This Christian back story is truly the big story of Jeremiah’s prophecy.

In conclusion, Jeremiah presents us with two coming showdowns in Iran. The first four verses appear to apply to Iran’s present nuclear scenario, but the last two verses discuss the spiritual warfare currently taking place inside Iran between Islam and Christianity.

Nuclear Showdown in Iran, Revealing the Ancient Prophecy of Elam is a non-fiction thriller taking the reader on a journey of discovery through the eyes of the prophets and the minds of today’s key national players. The ancient prophecy of Elam will reveal what God has ordained, what the prophets saw and what you need to know and do now.

CLICK HERE TO ORDER YOUR COPY OF THE BOOK AND DVD. (Watch the book trailer below).