Russia, Iran and Turkey in the News, is it Time for Ezekiel 38? 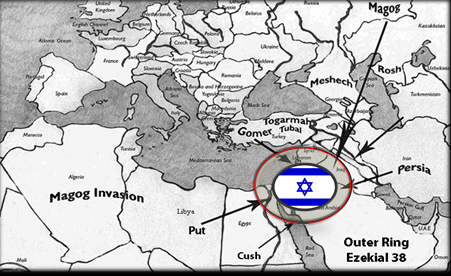 In this Prophecy Watchers television briefing below, Bill Salus explains the prophetic implications of the emerging world powers of Russia, Turkey and Iran. Does this imply that the 2600-year-old prophecy of Ezekiel 38 is poised to happen. Does the Israel described in Ezekiel 38 exist today? Is Israel dwelling securely without walls, bars or gates? Are they the wealthy nation that the Gog of Magog coalition seeks to conquer for booty and great plunder?

Image displays the Outer Circle of nations that invade Israel in Ezekiel 38.

“After many days you (Russia) will be visited. In the latter years you will come into the land of those brought back from the sword and gathered from many people on the mountains of Israel, which had long been desolate; they were brought out of the nations, and now all of them dwell safely. You will ascend, coming like a storm, covering the land like a cloud, you and all your troops and many peoples with you.”

‘Thus says the Lord God: “On that day it shall come to pass that thoughts will arise in your mind, and you will make an evil plan: You will say, ‘I will go up against a land of unwalled villages; I will go to a peaceful people, who dwell safely, all of them dwelling without walls, and having neither bars nor gates’- to take plunder and to take booty, to stretch out your hand against the waste places that are again inhabited, and against a people gathered from the nations, who have acquired livestock and goods, who dwell in the midst of the land. Sheba, Dedan, the merchants of Tarshish, and all their young lions will say to you, ‘Have you come to take plunder? Have you gathered your army to take booty, to carry away silver and gold, to take away livestock and goods, to take great plunder?’”’ (Ezekiel 38:8-13, NKJV)

The modern day equivalents of these protestors in Ezekiel 38:13 are commonly understood and taught to be;
1. Sheba: Yemen.
2. Dedan: Saudi Arabia and perhaps parts of the Gulf Cooperative Council (GCC) Arab Gulf States.
3. Tarshish: Either the UK or Spain.
4. Young Lions: Either the colonies that came from the UK, namely North America, or the offshoots of Spain, mainly the Latin American countries.