Why Should Believers Care About What Happens After the Rapture?

Larry Spargimino of Southwest Radio interviews Bill Salus about his new book and DVD called, Apocalypse Road, Revelation for the Final Generation. These two radio shows help believers to realize how soon the Rapture could take place and why they should care about what happens afterward on the earth. 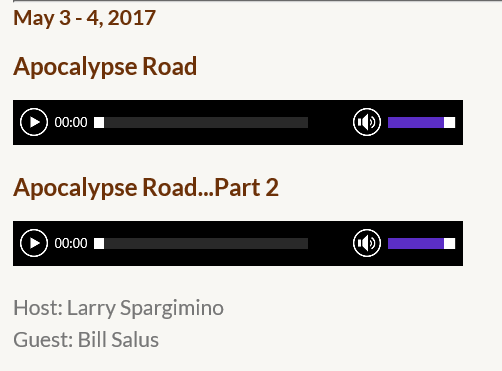 CLICK HERE to listen. (Scroll down to the May 3-4 shows).

This is book two of an end times trilogy that attempts to chronologically order the biblical prophecies that occur between now and the second coming of Jesus Christ. Book one is called Revelation Road, Hope Beyond the Horizon and it concluded with the end of the Church Age. Apocalypse Road covers the prophecies that seemingly happen in the interval between the Rapture and the seven-year Tribulation Period like, the Gog of Magog invasion of Israel prophesied in Ezekiel 38, the formation of the global world religion called Mystery Babylon, the ride of the 4 Horsemen of the Apocalypse, the arrival of the Antichrist, the martyrdom of the 5th Seal Saints, the revealing of the 144,000 Jewish witnesses, the identity of the 2 Witnesses and more.

This book combines a novel with a biblical commentary. A two books in one format. If you enjoyed the Left Behind books, you will appreciate the biblical explanations provided in Apocalypse Road. The novel storyline: “Millions of Christians disappeared, apparitions of the Virgin Mary have reappeared, meanwhile the Antichrist begins his beastly career. The apocalypse has finally arrived! Israelis, Lisa and her daughter Jami, have been left behind! Follow their perilous journey in the mysterious time gap that follows the Rapture, but precedes the Tribulation period. Walk in their shoes as they befriend some of the 144,000 Witnesses and face off with the epic Ezekiel 38, Gog of Magog invasion.

See through their eyes how the Harlot of Mystery Babylon uses supernatural signs and wonders to rule the world. You will also discover the identities of the two parties of the false covenant and its true content, which starts the rebuilding of the Jewish Temple and triggers the treacherous seven-years of tribulation. It’s all stage setting right now before our eyes! Apocalypse Road, Revelation for the Final Generation, is the final warning to the final generation to get right with the Lord now, before it’s too late!