THIS ARTICLE SERIES IS TAKEN FROM THE BILL SALUS BOOK ENTITLED, THE NEXT PROPHECIES, which is available at this
link. 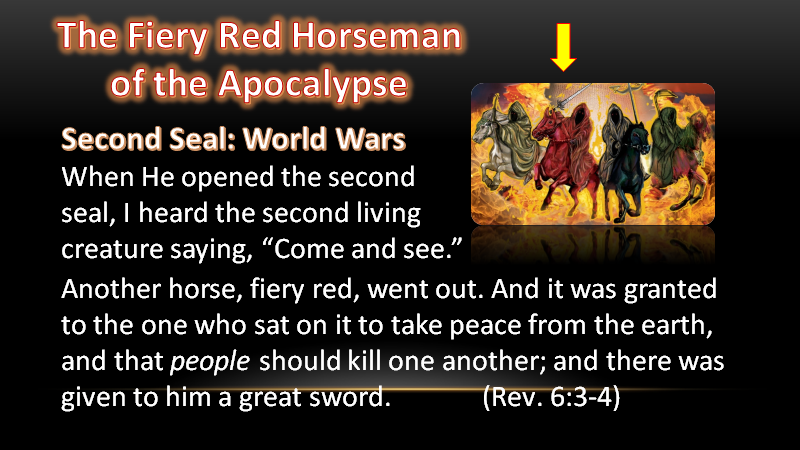 Having explored the first seal, let’s move on to the second and third Seals. When it comes to interpreting the Second Seal of Revelation 6:3-4 and the Third Seal of Revelation 6:5-6, there are no significant differences between the traditional and alternative views. Regardless of whether they start in Tribulation period, which is the traditional teaching, or in the Post-Rapture / Pre-Tribulation gap period, which is the alternative teaching, the interpretations are similar. As such, a couple of explanatory quotes from The Bible Knowledge Commentary New Testament by John Walvoord and Roy B. Zuck are presented below.

The Second Seal – Revelation 6:3-4. “With the breaking of the second seal a red horse appeared with a rider empowered to take peace from the earth… In contrast with the first rider who has a bow without an arrow this second rider carried a large sword. This again was a picture of political power with the rider as the world ruler.” 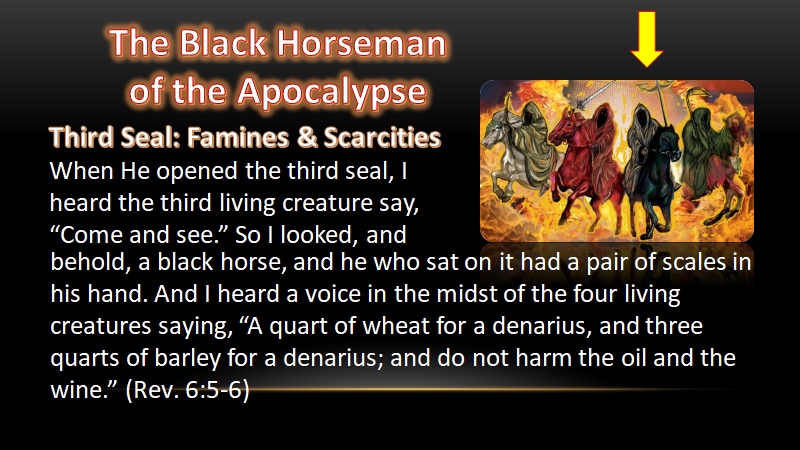 The Third Seal – Revelation 6:5-6. “With the opening of the third seal a black horse was revealed with a rider carrying a pair of scales in his hand. At the same time a voice was heard from among the four living creatures saying, A quart of wheat for a day’s wages, and three quarts of barley for a day’s wages, and do not damage the oil and the wine! “A day’s wages” refers to a silver coin, the Roman denarius, worth about 15 cents, which was the normal wage for a worker for an entire day. So this passage is saying that in that food shortage an entire day’s work would be required to buy either a quart of wheat or three quarts of barley. If one bought wheat, it would be enough for one good meal; if he bought barley, it would be enough for three good meals but nothing would be left for buying oil or wine. Famine is the inevitable aftermath of war. This will be a major cause of death in the Great Tribulation. The black color of the horse speaks of famine and death.”

“When He opened the fourth seal, I heard the voice of the fourth living creature saying, “Come and see.” So I looked, and behold, a pale horse. And the name of him who sat on it was Death, and Hades followed with him. And power was given to them over a fourth of the earth, to kill with sword, with hunger, with death, and by the beasts of the earth.” (Revelation 6:7-8)

The traditional view teaches that this horseman kills a “fourth of the earth.” Some believe that this could amount to 1 or 2 billion people. I think the list of modern-day prophecy teachers who believes this is the case includes, Tim LaHaye, Mark Hitchcock, David R. Reagan, Grant R. Jeffrey, Ron Rhodes, Thomas Ice, John Hagee, J. Vernon McGee, Hal Lindsey, Billy Crone and Joel Rosenberg. Below is another quote from The Bible Knowledge Commentary New Testament.

“Here is the aftermath of war, famine, and death. With war and famine people fall prey to a plague and the wild beasts of the earth. The startling fact is revealed that a fourth of the earth, or approximately a billion people by today’s population figures, will be killed by these means. It should be obvious that this is not a trivial judgment but a major factor in the Great Tribulation, thus supporting the conclusion that the Great Tribulation has begun. The first four seals may be considered as a unit and a general description of the Great Tribulation as an unprecedented time of trouble.”

The Fifth Seal identifies a group of people who have been martyred for their faith. The traditional view teaches that these saved souls became believers after the rapture, but were killed for their faith during the seven-year Tribulation period. The Bible Knowledge Commentary New Testament says,
“These are obviously martyrs, mentioned in more detail in Revelation 7. This makes it clear that souls will be saved in the Great Tribulation, but many of them will be martyred.”

The alternative view will point out in a subsequent part of this article series that these saints of the fifth seal are possibly martyred in the Post-Rapture / Pre-Tribulation gap period rather than the great tribulation period.

“…and (men) said to the mountains and rocks, “Fall on us and hide us from the face of Him who sits on the throne and from the wrath of the Lamb! For the great day of His wrath has come, and who is able to stand?” (Revelation 6:16-17; emphasis added)

The Matthew 24 and Revelation 6 Comparisons

The traditional view often connects events in Matthew 24 with seemingly similar events in Revelation 6. This comparison is supposed to evidence that the seal judgments are all part of the Tribulation period. Dr. John Walvoord sums it up below.

Do these prophecies parallel each other and do they clearly evidence that the seal judgments all occur within the Tribulation period? Compare the potential explanations below with a few of these events associated above.

4. The Great Tribulation, (Matthew 24:20). This period covers the last three and one-half years of Daniel’s Seventieth Week. This period includes the events described in Matthew 24:15-31.

5. The Second Coming, (Matthew 24:30). This event happens at the end of Daniel’s Seventieth Week. This period covers the predictions in Matthew 24:29-31.

The traditional viewpoint often attempts to connect the End is not Yet period, with the opening of the first seal judgment. The Matthew 24 verses read,

And Jesus answered and said to them: “Take heed that no one deceives you. For many will come in My name, saying, ‘I am the Christ,’ and will deceive many. And you will hear of wars and rumors of wars. See that you are not troubled; for all these things must come to pass, but the end is not yet. (Matthew 24:4-6)

The traditional thinking is that the Antichrist, when he comes as the “White Horseman of the Apocalypse,” will be deceiving people by presenting himself as the messiah, as if to proclaim that he is “the Christ.” There are two problems with this interpretation. First, the verse states that “many will come,” rather than “someone, namely the Antichrist, will come.” Second, even if this does allude to the arrival of the Antichrist, this does not happen during the Tribulation period, rather the false Christs deception period happens prior to then during the End is not Yet time frame. It’s important to note that from the issuance of this warning about 2000 years ago from Jesus Christ, “many have come” in His name claiming to be the messiah.

Then, the traditional view aligns the wars of Matthew 24:7 with the wars of the second seal in the tribulation period, but there are potential problems with this pointed out below.

“For nation will rise against nation, and kingdom against kingdom. And there will be famines, pestilences, and earthquakes in various places. All these are the beginning of sorrows.” (Matthew 24:7-8)

It’s true that the second seal of Revelation 6:3-4 introduces world wars, but some teach that nation came against nation in World Wars 1 and 2. If that’s the case, then this prophecy has already been fulfilled in the past and can’t be compared to the future wars of the second seal judgment. Also, famines, pestilences and earthquakes are and have been occurring in various places.

Matthew 24:8 identifies a period of birth pangs called the “beginning of sorrows.” Is this sorrowful period in the Tribulation period? It seems to precede this tribulation period according to the Matthew 24:9 verse that follows, which says,

“Then, after nation comes against nation, they will deliver you up to tribulation and kill you, and you will be hated by all nations for My name’s sake.” (Matthew 24:9; emphasis added) 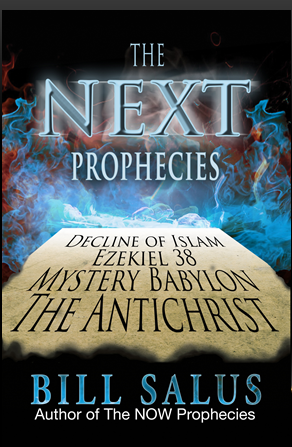 What if World Wars 1 and 2 is when nation came against nation as part of the birth pangs period? If so, then Matthew 24:9 tells us that after these historic wars, “Then they will deliver you up to tribulation.” This could imply that the wars, famines and pestilence of Matthew 24:7-8 will have happened prior to the Tribulation period, rather than during it.

Another potential scenario is that nation coming against nation in Matthew 24:7 truly is part of the second seal of Revelation 6:3-4, and the famines and pestilences of that same verse apply to the third seal judgment of Revelation 6:5-6. In these two instances, they would be part of the beginning of sorrows period, rather than the Tribulation period, which doesn’t start until Matthew 24:9. This would fit in the alternative view of the seal judgments, which is explained further in another part of this article.

In summary, the traditional interpretation of the seal judgments requires us to believe that the Tribulation period begins with the opening of these judgments. This view assumes that the covenant of Daniel 9:27 gets confirmed in Revelation 6:1-2 even though there is no mention of this covenant in those verses.

Although the traditional view could be the correct view, there is an alternative view that deserves an honorable mention. This view is presented non-dogmatically in a following part of this article series.