Revealing the Temple Clues Within the False Covenant 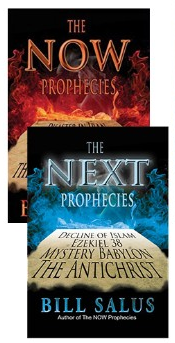 I recently explained why the infamous false covenant of the end times does not resolve the Arab-Israeli conflict in an article entitled, “Does the False Covenant End the Arab-Israeli Conflict?” Whereas there is no biblical basis to connect the false covenant with the resolution of that conflict, there is scriptural support to correlate the false covenant with the rebuilding of the third Jewish Temple. These clues are deposited in Isaiah 28:16-17, Revelation 11:1-3 and Daniel 9:27 and explained below.

“Because you, (Israel), have said, “We have made a covenant with death, And with Sheol we are in agreement, (the other parties to the covenant). When the overflowing scourge passes through, It will not come to us, For we have made lies our refuge, And under falsehood we have hidden ourselves.”” (Isaiah 28:15, NKJV, emphasis added)

“Your, (Israel’s) covenant with death will be annulled, And your agreement with Sheol will not stand; When the overflowing scourge passes through, Then you will be trampled down by it.” (Isaiah 28:18, NKJV; emphasis added)

“Then he, (the Antichrist) shall confirm a covenant with many, (between Israel and Death and Sheol) for one week, (of seven years); But in the middle of the week He shall bring an end to sacrifice and offering. And on the wing of abominations shall be one who makes desolate, Even until the consummation, which is determined, Is poured out on the desolate.” (Daniel 9:27, NKJV; emphasis added)

These are the verses that identify the covenant. The reason it is called the false covenant is because it does not bring a genuine peace, but only a false sense of peace. This is because:

“Therefore thus says the Lord God: “Behold, I lay in Zion a stone for a foundation, A tried stone, a precious cornerstone, a sure foundation; Whoever believes will not act hastily. Also I will make justice the measuring line, And righteousness the plummet; The hail will sweep away the refuge of lies, And the waters will overflow the hiding place.” (Isaiah 28:16-17) 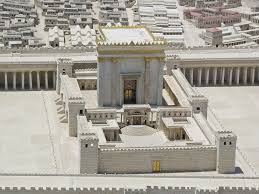 The first clue is contained in the two Isaiah 28 verses above. These two verses are sandwiched in between Isaiah 28:15 and 18, which are the verses referring to the false covenant. These passages use the terms “a tried stone,” “a precious cornerstone,” “a sure foundation,” a “measuring line” and a “plummet.” These are terms that can find association with constructing a Jewish Temple.

To build the Temple, you start with a tried stone that becomes the precious cornerstone. This cornerstone has a sure foundation built around it. The length and width dimensions of a building need to be calculated with a measuring line, and the vertical accuracy of a structure is determined with a plummet, (plumb-line).

I interpret Isaiah 28:16-17 as a warning to the scornful rulers of Jerusalem in Isaiah 28:14 to not drag Israel into being a signatory of this dreadful covenant. These leaders seem to think that they are going to build a Temple and hasten the coming of the Messiah. Among religious Jews today, this is considered one of the main motivators for rebuilding the temple.

Isaiah cautions them to not hastily enter this covenant, because the Messiah, Jesus Christ, has already come as the, Tried Stone (1 Peter 2:4-8), Precious Cornerstone (Matthew 21:42, Ephesians 2:19-22) and Sure Foundation (1 Corinthians 3:11).

The scornful rulers of Jerusalem believe that the false covenant will permit them to build their temple. They believe that this pact will enable them to lay down the precious cornerstone for the sure foundation of the third temple. However, Isaiah contradicts their thinking by saying,

“Therefore thus says the Lord God: “Behold, I, (not the scornful leaders of Jerusalem), lay in Zion a stone for a foundation, A tried stone, a precious cornerstone, a sure foundation; Whoever believes, (that I accomplished this over 2000 years ago through Jesus Christ), will not act hastily.” (Isaiah 28:16; emphasis added)

A second interesting clue is in the book of Revelation. Several important details are provided in these passages below concerning the benefits to both parties of the covenant. These verses describe what happens in the immediate aftermath of the ratification of the false covenant. 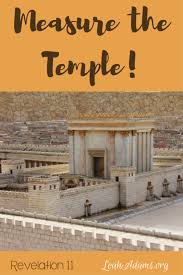 “Then there was given me a measuring rod like a staff; and someone said, “Get up and measure the temple of God and the altar, and those who worship in it. Leave out the court which is outside the temple and do not measure it, for it has been given to the nations; and they will tread under foot the holy city for forty-two months. And I will grant authority to my two witnesses, and they will prophesy for twelve hundred and sixty days, clothed in sackcloth.” (Rev. 11:1-3, NASB)

The time frame of “forty-two months” is associated with one-half of the seven years of tribulation. The same increment of time is used in the ensuing verse but worded differently as, “twelve hundred and sixty days.” It is commonly taught that both usages in these verses allude to the first half of the Trib-period.

Thus, the very first thing that appears to happen as part of the implementation of the covenant, is that the Temple gets measured for its construction. The apostle John is given a measuring rod and instructed to measure the temple of God, alluding to the Third Temple. So, if the covenant called for the construction of the Temple, then this would be one of the first order of events. Measure it so that it can be built.

Notice that there are some significant restrictions placed upon John’s measuring of the Temple that benefit the other covenanting party. The other party are Gentiles who must have some claims to the Temple’s outer court and Jerusalem because they are given authority over the outer court, and access to trample through the holy city of Jerusalem. In order for the leaders to build their Temple they will need to negotiate with these Gentiles. This will be a first for them. Historically, the Jews did not negotiate with any Gentiles when they built their first and second temples.

Thus, another possible way to translate this verse is, the pagans will tread under foot, the holy city of Jerusalem. They will need this access to make their way to the outer court of the Temple mount, which is given over to these pagan Gentiles. This is an important concession for these pagans. It implies that whoever they are, that they have valid claims to these sacred areas. Presently, the Old City of Jerusalem is divided into four quarters: Christian, Armenian, Jewish and Muslim. The Christian category includes Roman Catholicism.

When the covenant gets confirmed and the Gentiles get awarded access to Jerusalem and authority over the outer court, several Bible prophecies will have likely happened. Two important ones will be Psalm 83 and the Rapture, not necessarily in that order. After Psalm 83, the Muslims will probably lose substantial control over their quarter in the Old City and after the Rapture some Christian and Armenian sections will be vacated by many true believers that resided there. This leaves the Jews and probably a strong Vatican contingency.

“The Catholic Church is “amillennial,” meaning that it believes that Christ’s second coming and the last judgment will happen at the same time. According to Colin Donovan, theologian at EWTN, the Church “teaches that Christ already reigns in eternity (1 Cor 15:24-27) and that in this world his reign … is found already in the Church.”… Therefore, we believe “He will come again in glory to judge the living and the dead.” Our belief is that the rapture will take place at the end of the world, and not until then.” (i)

In The Next Prophecies book I provide the biblical basis for the Catholic Church being left behind and becoming the head of ecclesiastical Babylon of Revelation 17. The Catholic Church has a prophetic application to the letter to the Church of Thyatira in Revelation. The Church of Thyatira will be left behind and cast into the sickbed of the great tribulation period.

“Indeed I will cast her, (the Catholic Church as prophetic Thyatira), into a sickbed, and those who commit adultery with her, (the kings of the earth commit fornication with the harlot in Rev. 17:2) into, (the) great tribulation, (period), unless they repent of their deeds.” (Rev. 2:22, emphasis added)

This does not mean that all Catholics are unsaved, hopefully many of them are born again and will either be Raptured or become true believers afterward. It simply means that the institution of the Catholic Church still exists after the Rapture.

The next clue is found in Daniel 9:27, which also serves as a proof text verse in regard to the false covenant.

“Then he, (the Antichrist), shall confirm a covenant with many, (Israel and Death and Sheol), for one week; (of seven years), But in the middle of the week, (after three and one-half years), He shall bring an end to sacrifice and offering, (taking place in the Temple). And on the wing of abominations shall be one who makes desolate, Even until the consummation, which is determined, Is poured out on the desolate.” (Daniel 9:27; emphasis added)

Jesus Christ foretells that this event predicted by Daniel happens in the holy place, which represents the Third Jewish Temple at the time.

The intimations in these related verses above, are that by the middle of the Trib-period the Third Jewish Temple will exist. The Antichrist will make a bold statement by entering this Temple and stopping the priestly sacrifice and offering occurring therein. This is in fulfillment of Isaiah 28:18, which says the false covenant will be annulled.

“Your covenant with death will be annulled, And your agreement with Sheol will not stand; When the overflowing scourge passes through, Then you will be trampled down by it.” (Isaiah 28)

What better way to annul a covenant than to void out its terms? If the true content of the false covenant allowed the Jews to build their Temple and perform sacrifices and offerings inside of it, then the action taken by the Antichrist to go into the Temple and stop the sacrifice and offering terminates the contract.

These three clues above seem to suggest that the true content of the false covenant has something to do with the building of the Third Jewish Temple. Rev. 11:1-3 points out that when the covenant is enacted the Jews will promptly rebuild their Temple. Isaiah 28:16-17 explains that the Jews will believe that this Temple will invoke the coming of their Messiah. Daniel 9:27 points out that the opposite will happen. It won’t be the Messiah that enters the temple to bless it, rather it will be the Antichrist who intrudes into the temple to curse it and annul the false covenant.