The Third Temple is no longer a figment of Jewish imagination, but will soon become a reality. Concerning this coming Temple, the Bible predicts it, the Jews are preparing to build it and so now it’s time to write about it and evangelize through it.

The latter portion of this article will explain how to witness to the Jewish people by familiarizing them with their coming Third Temple, but some preparatory information for the evangelizer is provided first. 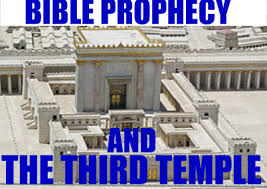 A few of the primary direct and indirect verses that foretell of this future Tribulation Temple are quoted and explained below.

The Direct References to the Temple

The First Temple Related Passage: “Then I was given a reed like a measuring rod. And the angel stood, saying, “Rise and measure the temple of God, the altar, and those who worship there. But leave out the court which is outside the temple, and do not measure it, for it has been given to the Gentiles.” (Rev. 11:1-2)

In these verses the apostle John undertakes the task of measuring the coming “temple of God.” When John wrote this verse around 95 AD there was no longer a “temple of God” in existence. The Second Jewish Temple had been destroyed by the Romans about 25 years prior in 70 AD. Thus, this prophecy introduces a future temple, which will be the Third Jewish Temple.

The timing of John’s measuring takes place in the first half of the Trib-period in correlation with the timing of the Two Witnesses in Rev. 11:3-13. This means that this “temple of God” exists within the Trib-period, which is why some scholars opt to call it, “The Tribulation Temple.”

The Second Temple Related Passage: “Let no one deceive you by any means; for that Day will not come unless the falling away comes first, and the man of sin is revealed, the son of perdition, who opposes and exalts himself above all that is called God or that is worshiped, so that he sits as God in the temple of God, showing himself that he is God.” (2 Thessalonians 2:3-4)

These two verses also allude to the “temple of God.” They inform that the man of sin, which is a reference to the Antichrist, will pompously sit in the future Jewish Temple and boast of himself as God. This event happens at the midpoint of the Trib-period and is yet another reason that the coming Temple is aptly called, the Tribulation Temple.

The Indirect References to the Temple

The Third Temple Related Passage: “Then he shall confirm a covenant with many for one week; But in the middle of the week He shall bring an end to sacrifice and offering. And on the wing of abominations shall be one who makes desolate, Even until the consummation, which is determined, Is poured out on the desolate.” (Daniel 9:27)

This verse makes an indirect reference to the temple by alluding to the sacrifices and offerings that will take place in the Tribulation Temple. These religious activities will be terminated by the Antichrist “in the middle of the week,” which alludes to a week of years not days. This week refers to the Seven Year Tribulation Period. This verse connects with 2 Thess. 2:3-4 quoted above. It evidences that the timing of when the Antichrist sits in the temple as God, occurs in the middle of the Trib-period.

The Fourth Temple Related Passage: “Therefore when you see the ‘abomination of desolation,’ spoken of by Daniel the prophet, standing in the holy place” (whoever reads, let him understand),  “then let those who are in Judea flee to the mountains.” (Matthew 24:15-16)

Although Jesus doesn’t replicate the terms, “the temple of God,” in these two verses, He does use the words, “the holy place,” which is a reference to the temple. Since this act of the “abomination of desolation” didn’t happen prior to the destruction of the Second Temple, this prophecy must refer to the coming Third Jewish Temple.

This quote from Jesus Christ rounds out the activities contained in 2 Thess. 2:3-4 and Daniel 9:27 above. The chain of events are as follows:

The Jews are Preparing to Build the Temple

In April of 2019, Moshe Feiglin,the head of the far-right quasi-libertarian Zehut party said that he wants to rebuild the Jewish Temple on the Temple Mount in Jerusalem immediately.

Some believe that this Temple could be constructed within a year or two, and that initially an altar could be established on location for Temple services and needs in the interim in a matter of just a few days. A case in point is the Hanukkah dedication by the Sanhedrin in 2018. Concerning this important event, one news article reads;

“The nascent Sanhedrin released a declaration to the 70 nations for Hanukkah to be read at a ceremony in Jerusalem on the last day of the holiday. The ceremony will include the consecration of a stone altar prepared for use in the Third Temple. The declaration is intended as an invitation to the nations to participate in the Temple and to receive its blessings. The altar is currently in the form of loose stone blocks ready to be transported to the Temple Mount and stored in a manner that will enable them to be transported and assembled at a moment’s notice.”[ii] 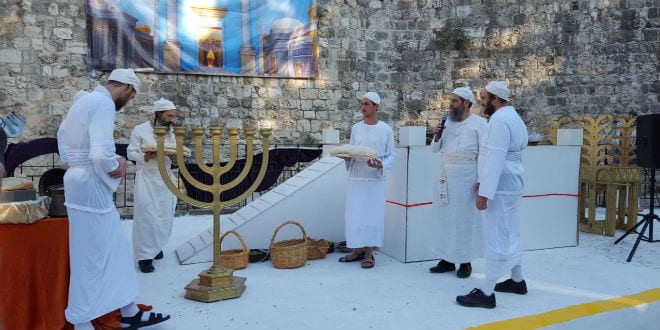 Additionally, the Temple Institute, the reestablished Sanhedrin and other Temple related organizations are preparing for all the required needs of an operational Third Temple. Architectural drawings exist and Levitical Priests are assigned and trained, including the required High Priest. Moreover, the Temple vessels and vestments are prepared, including the menorah, the table of showbread and the golden altar of incense. 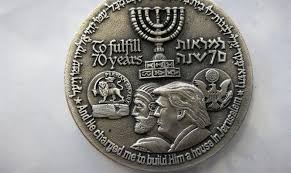 Recently, I was even provided with some gold and silver coins that pictured images of the heads of  US President Donald Trump and King Cyrus on one side and the coming Jewish Temple on the other. These coins are intended to generate revenues to be used toward the coming Temple.

This is an incredible reality that lines up perfectly with the biblical prophecies related to the Tribulation Temple. If you want to learn more about this Temple and stay apprised of its continued developments you can visit the following websites:

How this coming Jewish Temple can be used to evangelize Jews

While watching a Prophecy Watchers TV show that was hosted by Gary Stearman, I picked up some invaluable insights on how to evangelize to Jews by familiarizing them with the coming Temple. The show featured Pastor Billy Crone and can be viewed on YouTube under the show title of, “Billy Crone: Trump, the Temple and the Antichrist.”

The preparatory information at the beginning of this article has provided details that can assist you in following a few sequential steps that can be used to evangelize a Jewish person. By asking the questions below and being able to follow up with interesting facts and answers, you just might lead a Jew or Jews to their Messiah, Jesus Christ.

QUESTION #1: Did you know that the Jews are preparing to build their Third Temple?

QUESTION #2: Did you know that the Bible predicted that this Third Temple would be built?

After asking and answering the first two questions you should have the Jew(s) undivided attention, or at least piqued their interest to proceed with further questions and explanations. These two facts, that the Jews are going to build their Temple and the Bible predicted that they would, are real time and undeniable nuggets of information and should be exciting to Jews.

However, this information in and of itself is not necessarily going to get a Jew to receive Christ as their Messiah, but hopefully by now, the Jew is curious to know if the Bible foretells of any more information about their future.

QUESTION #3: Would you like to know more about what the Bible predicts about the future of Israel, the Temple and the Jewish people?

QUESTION #4: Sadly, did you know that this Temple may have a very short lifespan?

By now a Jew should become disoriented. This is a disconnect. They could wonder, why and how does this happen? And, where is this a biblical prophecy? The Jew will likely applaud the fact that the temple is in Bible prophecy, but they should be stopped in their tracks to hear that the temple worship will be short-lived.

In love, let them know that’s not all and then you level the boom by laying out the following predicted chronology of events.

These statements should provoke the question about timing. HOW SOON will these terrible things take place? The honest answer, in light of the points already made about the Temple, is that these events could happen SOON, probably in the Jewish person’s lifetime.

QUESTION #5: Did you know that over 2000 years ago that Jesus Christ warned about all of this in the Bible?

QUESTION #6: Would you like me to read from the Bible where Christ issued this warning?

THE NOT SO GOOD NEWS

Now it’s time to present the better, but still not so good, news to the Jew.

The Jewish person might ask; “How is this good news?”

Now it’s time to give the Jew THE GREAT NEWS, which is that he or she can avoid this period of Great Tribulation, the abomination of desolation and the genocidal campaign of the Antichrist by receiving Christ right NOW!!!

(A smart Jew should be then grabbing his or her pen and saying, “WHERE DO I SIGN!”)

NOTES TO REMEMBER WHILE WITNESSING TO THE JEW(S)

[i] Feiglin quote taken on 6/7/19 from this website: https://www.timesofisrael.com/zehuts-feiglin-says-he-wants-to-build-third-temple-right-away/

[ii] Sanhedrin Temple Headline and quote taken on 6/8/19 from this website: https://www.breakingisraelnews.com/117830/70-nations-hanukkah-altar-third-temple/

[iii] Passover sacrifice in 2018 information taken on 6/8/19 from this website: https://www.jpost.com/Israel-News/Lamb-sacrificed-at-foot-of-Temple-Mount-for-first-time-in-modern-history-547187