Russia, Iran and Turkey Plot Syria’s Future, Will This Lead to Ezekiel 38? 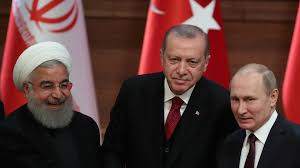 Russian President Vladimir Putin, Iranian President Hassan Rouhani and Turkish President Recep Tayyip Erdogan met in Sochi in November of 2017 and renewed their commitment to Syrian sovereignty, independence, territorial integrity and unity. They reconvened again in Tehran on September 7, 2018 and in Sochi on February 14, 2019 to plot their respective roles in the reshaping of Syria’s future in the aftermath of the 8-year Syrian civil war.

Russia, Turkey and Iran are members of a coalition identified in the prophecy of Ezekiel 38. According to Ezekiel 38:1-13, an alignment of nine populations come together in the latter days to invade Israel to take booty, to carry away silver and gold, to take away livestock and goods, to take great plunder. This coalition is sometimes referred to as the “Magog Coalition.” 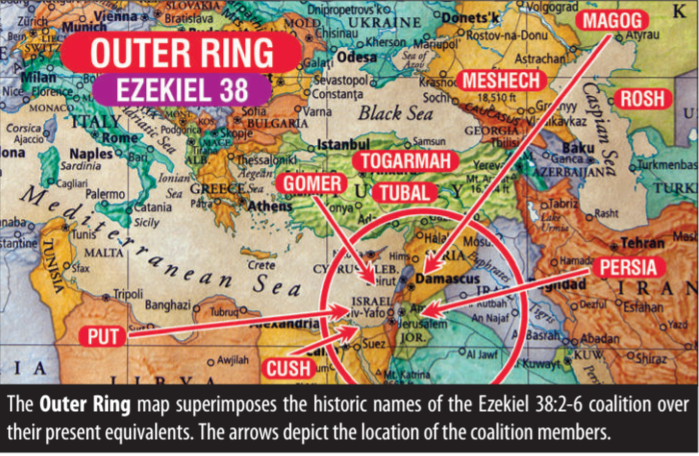 The fact that these strange bedfellow countries of Sunni Turkey, Shia Iran and multi-faith Russia are coming together as Syria’s ‘guarantor countries’ has some of today’s popular Bible prophecy teachers sounding the “Ezekiel 38 is coming soon” alarm! Could this be a premature assessment, considering neither Syria or any of Iran’s proxies such as Hezbollah, Hamas or the Houthis are identified in the Ezekiel prophecy? Is Ezekiel 38 as imminent as some of these teachers would have you believe?
__________________________________

CLICK HERE to read the article entitled,
“IRAN is in Ezekiel 38, but why NOT their PROXIES?”

In addition to warning about the soon coming of Ezekiel 38, most of these teachers are predicting the soon fulfillment of the destruction of Damascus, Syria, which is prophesied to happen in Isaiah 17. For the most part, these warnings about the nearby fulfillment of Isaiah 17 and Ezekiel 38 are based upon the major and minor premises below.

In that day his, (alluding to Syria in the masculine pronoun), strong cities will be as a forsaken bough And an uppermost branch, Which they left because of the children of Israel (IDF); And there will be desolation. (Isaiah 17:9, NKJV)

2. Another minor premise is that these three Ezekiel 38 nations are in Syria and convening about Syria’s future, which implies that they are one huge step closer to forming the Magog coalition.

3. The MAJOR premise is that the formation of the Magog coalition means that Ezekiel 38 is coming soon.

On the surface these premises seem logical, but do the details of these two biblical prophecies support this teaching? 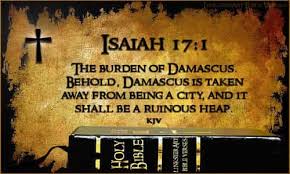 What Does Isaiah 17 Predict for Syria’s Future?

According to predictions in Isaiah 17, Jeremiah 49:23-27, Psalm 83 and elsewhere modern-day Syria’s nearby future looks very grim. This is not good news for Russia, Turkey and Iran. These three guarantor countries plot an entirely different future for Syria than the Bible does.

Isaiah 17:1 predicts that Damascus will cease to be a city, which is a like theme echoed in Jeremiah 49:23-27. Isaiah 17:9 foretells that not only Damascus, but other “strong cities” in Syria will be desolated by the “children of Israel,” the IDF. Isaiah 17:14 says that the destruction of Damascus, and perhaps other Syrian cities, happens overnight. Read a couple of different descriptive translations of this verse below.

“In the evening Israel waits in terror, but by dawn its enemies, (at least in Damascus), are dead. This is the just reward of those who plunder us, (Israel), a fitting end for those who destroy us.” (Isaiah 17:14 NLT)

“In the evening—sudden terror! Before morning—it, (Damascus), is gone! This is the fate of those who plunder us, (Israel), and the lot of those who ravage us.” (Isaiah 17:14, HCSB)

If Isaiah 17:1-14 happens soon, which some including me, believe will be the case, then this will be extremely disruptive for these three guarantor countries future plans for Syria. In fact, it’s hard to imagine that Russia, Turkey and Iran would allow these Syrian cities to be destroyed. Rather, it would seem logical to assume that they would maintain their current military support within Syria to war against Israel to protect their respective interests.

However, Isaiah predicts that Syria will be conquered by Israel, which implies that at the time Russia withdraws, Turkey steps aside and Iran retreats or perhaps also gets defeated by the IDF, which might be a fulfillment of Jeremiah 49:34-39. Also, it’s important to note that neither Russia, Turkey or Iran are identified anywhere in Isaiah 17.

So it seems safe to say, that according to the Bible, modern-day Syria has no future and that Russian, Turkish and Iranian involvement with Syria is likely to be short-lived. Presuming that these guarantor countries are about to abandon their interests in Syria, would that pose a potential problem for the minor premise #2 and major premise #3 above, at least temporarily?

If Isaiah 17 happens before Ezekiel 38 would this create distance or further cohesiveness with these Syria’s guarantor countries? At the very least, this possibility should give some of these Ezekiel 38 now teachers some pause to ask the question; What if the fulfillment of Isaiah 17 happens soon and these countries leave Syria and no longer meet together to discuss the future of Syria, would that suggest that maybe the formation of the Ezekiel 38 coalition could be somewhat hindered and delayed? Could that mean that Ezekiel 38 isn’t necessarily an imminent event?

What Does the Bible Predict About Ezekiel 38? Is it Imminent?

Ezekiel 38:8-13 provides details about the condition of Israel when Ezekiel 38 happens. If all of these prerequisite circumstances don’t exist presently, then Ezekiel 38 can’t be considered an imminent event. These conditions are;

1. The prophecy happens in the “latter years,”
2. Many Jews will be regathered from the diaspora into an existing nation of Israel,
3. These regathered Israelis must be a peaceful people that are dwelling securely in unwalled villages (cities),
4. The Jewish state will be lacking partition walls and security fences, (all of them dwelling without walls, and having neither bars nor gates). (Ezekiel 38:11),
5. The economy of Israel will be thriving, because the Ezekiel 38 invaders are coming, (to take plunder and to take booty). (Ezekiel 38:12).

I explain how Israel does not currently meet the perquisite conditions of #3 and #4 in the article linked HERE that is entitled, Is Ezekiel 38 a NOW or NEXT Prophecy?

After you read this Ezekiel article, you might agree me, that although Isaiah 17 could be considered an imminent event, it is doubtful that Ezekiel 38 could also be classified as such.