Introducing The Apocalypse Revelations, a Novel by Bill Salus 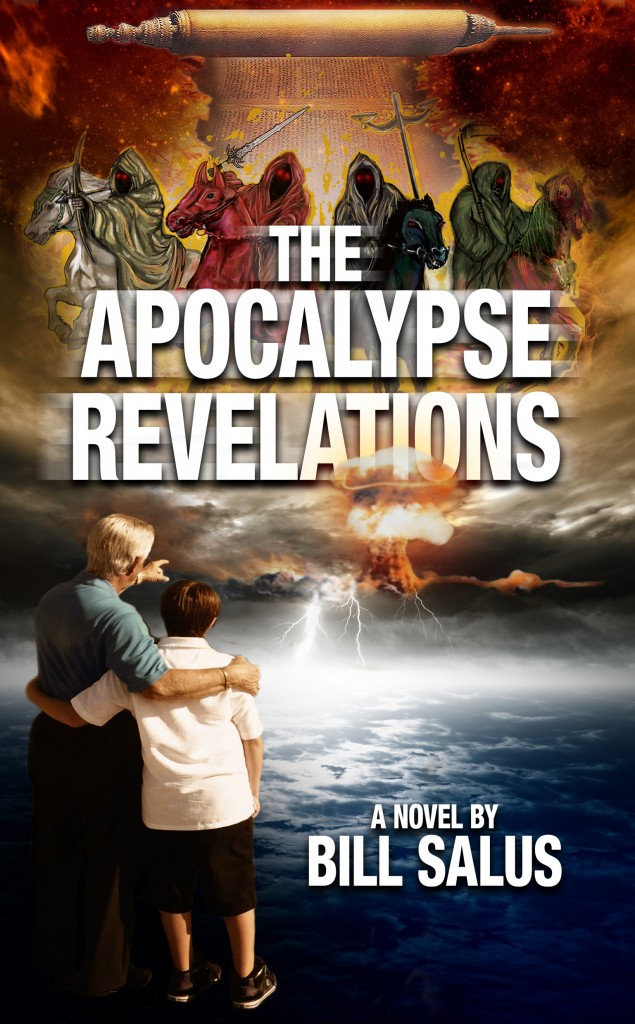 The world has been thrust into chaos and uncertainty. Epic prophetic wars are happening in the Middle East. Millions of Christians just disappeared, apparitions of the Virgin Mary have reappeared, meanwhile the Antichrist begins his charismatic career. The apocalypse has finally arrived!

Take an end times journey with an American and Israeli family as they experience ancient biblical predictions roll off their parchments and pound onto the pavement packing a powerful global punch. Will the Thompson’s survive this perilous period?

It’s not enough to simply talk about these Bible prophecies, but it’s important to understand how they will impact our lives when they find their fulfillment. This is the true intent of this Bill Salus novel. The Apocalypse Revelations takes the readers through the foretold travails of the end times. Follow a family as they experience the prophecies that are destined to change the world forever.

This book merges together the novel sections in the books called, Revelation Road, Hope Beyond the Horizon and Apocalypse Road, Revelation for the Final Generation. These two books combined a novel with a biblical commentary. However, now you can read those two novels as one stand-alone book.

This book chronologically orders the events that happen soon between now and the start of the final 7-year Tribulation Period. These events take you through the Church Age and beyond into the mysterious time-gap that follows it.

Experience the End Times through the eyes of the Thompson family, and discover how their gripping story uncovers the silver lining of hope against the backdrop of global gloom and doom… Their family tale could soon become your reality!

Prophetic topics that the Thompson’s experience in this novel are;

The Destruction of Damascus (Isaiah 17),
The Nuclear Disaster in Iran, the Prophecy of Elam (Jeremiah 49:34-39),
The Israeli Defense Forces in Bible Prophecy (Obadiah 1:18),
The Final Arab-Israeli War (Psalm 83),
The Rapture of the Church (2 Thessalonians 4:15-18),
The Coming Greater, Safer Israel (Ezekiel 38:8-13),
The Russian, Turkish, Iranian Magog Invasion of Israel (Ezekiel 38),
The Future for America (Ezekiel 38:13),
Unrestrained Satanic Supernatural Deception (2 Thessalonians 2:8-9),
Revealing Mystery Babylon, the Harlot World Religion (Revelation 17),
The Arrival of the Antichrist (Rev. 6:1-2),
The Ministries of the 144,000 Jewish Witnesses (Rev. 7),
The Two Witnesses of the End Times (Rev. 11).
Satan’s Revealing of his seed, the Antichrist (2 Thessalonians 2:8-9)

If you are concerned about what your future holds, then consider The Apocalypse Revelations as your instruction manual for the events of the END TIMES!

CLICK HERE to view the Table of Contents and read 5 sample chapters for free on Kindle “LOOK INSIDE.”

Below is the “Table of Contents,” which includes some brief chapter excerpts.

Introduction to The Apocalypse Revelations

1 – Iran Prepares for the Apocalypse!

“The time has come! Islam’s messiah has readied for his return,” declared the charismatic Shiite cleric Zamani Nikahd. “President Zakiri, we must alert the others without delay, and inform them that their multi-front attack upon the little Jewish Satan is now imminent!”

Hezbollah’s Fadlallah boasted, “There is nothing to fear, Hezbollah handed Israel its head on a platter in our summer war with the Jews in 2006. With Iran, Syria, Hezbollah and Hamas attacking Israel together we can assuredly destroy the Zionist pigs and liberate Palestine for Hamas and our Palestinian brothers.”

Observing that his grandson had checked out of the discussion and into his pre-teen music world, Poppy tuned into his favorite Christian radio station and continued homeward. Shortly into the program, the radio station interrupted its broadcast, announcing: “This is Allen Smith, station manager at KWBC. We interrupt our regularly scheduled program to bring you an important breaking news alert!

We have just been informed that a barrage of rockets has rocked Tel Aviv. Reportedly, precision guided missiles carrying chemical warheads were included in the assault. Although many missiles were intercepted by Israel’s Iron Dome defense system, several apparently got through, hitting Israel’s capital city. Unconfirmed reports suggest that hundreds of Israelis are believed injured or dead as a result of these fatal blasts.”

“Hysteria fills the city streets, as several hundred thousand tourists and local residents scramble for gas masks and nearby bomb shelters. We have Sheila Abernathy, our correspondent on the ground in Tel Aviv, with us by phone. Sheila, what can you tell us?” Turning up the volume, Grandpa immediately blurted out, “Turn off your iPod quick, Ty! We have to hear this.”

Beginning her expedient evacuation from Damascus, Adara Tereiri cried out to her father, Syrian president Hassan Tereiri, “What have you initiated? Our country is in utter turmoil! Syria has come under serious attack from Israel!”

With tears streaming down her frightened face, Adara continued, “Brother Kamal has warned that we all must flee immediately because Israel is coming to destroy Damascus and our dynasty. He has already prepared a place of refuge for us in Jordan.” The Syrian president replied to his daughter, “I know this situation is escalating and looks like it’s spiraling out of control, but don’t panic. President Zakiri of Iran has promised his country’s full support to our final war with the Jews.”

6 – There’s Trouble in Tehran and Destruction in Damascus

Throughout the next few days, George Thompson and his faithful companion of forty-four years, Mimi, remained generally fastened to the sofa and focused upon the TV, watching Mideast matters significantly worsen. Additionally, George entertained a steady stream of phone calls from fellow prophecy buffs interested in comparing notes as to the biblical ramifications of the escalating Mideast mayhem.

“What went wrong?” Iranian president Muktada Zakiri inquired of his spiritual advisor Zamani Nikahd. “How could Israel use nuclear weapons against our closest allies? Were we not all, including the Syrians, under the divine protection of Allah, and called to hasten the return of messiah Muhammad Al-Mahdi?”

Nikahd replied, “Fear not, my vision of his return was crystal clear. Mahdi is coming! We are only to know when, not necessarily how, Muktada, and his time is near.”

Unimpressed with his advisor’s vague and cliché-like comment, Zakiri asked, “Then what am I to do, sit around and wait for Hezbollah, and Hamas to be destroyed alongside, before Iran attacks Israel? There is no word from Syrian president Hassan Tereiri, or his chief commanders, so I fear they all died during the blast, and lie buried deep beneath the Damascus rubble.”

8 – Arabs Unite to Fight: Is it Psalm 83, Ezekiel 38 or Armageddon?
9 – Psalm 83: The Final Arab–Israeli War
10 – The Russian – Iranian Nuclear Connection
11 – Terrorists Attack America Again!
12 – The Arabs Surrender
13 – Israel, the Next Emerging Market
14 – Greater Israel Makes Plans for a Third Temple
15 – Russia Forms an Evil Plan to Invade Israel
16 – The Christian Exodus into the Clouds
17 – After the Rapture, the World Gets Religious
18 – Left Behind, the Heavenly Love Letter
19 – The Message Left Behind
20 – Rabbis Warn of the Future Russian Invasion
21 – The European Union Consoles Israel
22 – The EU Condemnation and Vatican Consecration of Russia
23 – 144,000 Jewish Evangelists
24 – Hooked in the Jaws – Russia Covets Israeli Contracts with the West
25 – Jews Flee Israel as the Russian Invasion Begins
26 – The Antichrist and the Coming Global Religion
27 – The Collapse of the Russian Coalition
28 – Letter to the Saints Left Behind
29 – The Queen of Heaven Appears Globally
30 – The Harlot Rides the Beast to Peace and Prosperity
31 – Israel Cleanses the Holy Land
32 – Doomsday Conference Erupts Into Deadly Chaos
33 – Jews Return Home as Rumors of Nuclear Wars Abound
34 – The Vatican Global Council Meeting
35 – Millions Witness Eucharistic Miracles from Rome
36 – Two Witnesses Prepare for the Tribulational Period
37 – The Encounter between Satan and his Seed
Cast of Characters
Endnotes
Resource References